Floor plate by any other name is not Durbar 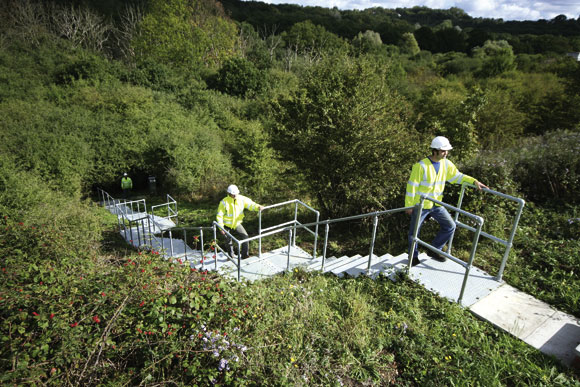 So what’s in a name? Dr. Rachel Haigh, Hot Rolled Products Manager at Corus, explains the important performance distinctions behind the real Durbar.

For almost forty years, Durbar has been identified with slip-resistant patterned steel floor plate, to the extent that the name has almost taken on a generic quality—the price of success, you might say. Durbar, however, refers only to the product manufactured by Corus.

According to the HSE1, some 38,000 people a year injure themselves at work in slips and trips. This suggests that there is still a great need for products that contribute to safer passage over surfaces, whether in permanent conditions, such as in factories, or temporary conditions, such as construction, building and planned maintenance. Legislation covers both areas, e.g. the Health and Safety at Work Act of 1974 and, more recently, the Construction (Design and Management) Regulations, 2007. Durbar can play a role in many environments where a slip-resistant surface is important. 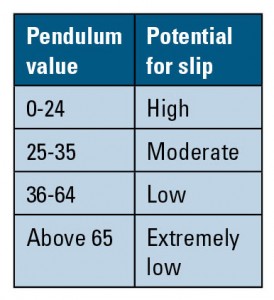 The HSE-approved method of testing materials for slip resistance is called the pendulum test2, 3. This is the one that Wessex Test Equipment Limited used to test Durbar’s potential for slip. An arm, mounted as a pendulum, swings and strikes the test material with a rubber slider. The surface friction of the material determines how far the head travels after it strikes the material. The material is tested in three directions: two perpendicular to each other and one at 45° between them. The results represent the risk category for reasonably active pedestrians aged between 18 and 60 walking in a straight line on a level surface.

Wessex’s tests showed that Durbar’s potential for slip was extremely low for the dry samples and low for the wet samples (see table 1).

Testing was conducted on uncoated Durbar under laboratory conditions. The actual slip resistance of Durbar will depend upon the real-life application and the environment in which it is used. Galvanising, painting or coating Durbar can influence its slip resistance.

Another distinctive characteristic of Durbar is that it is structural steel with guaranteed mechanical properties rather than ‘commercial quality’. This means that it acts as a structural component. As such, it needs less support than non-structural materials and is quicker and cheaper to erect. Durbar’s Young’s modulus is 200Mpa compared with, for example, an aluminium alloy, which is typically 40Mpa. It also complies with the Construction Products Directive.

Its performance in extreme heat is also superior to aluminium, which has a lower specific heat capacity than steel, i.e. it heats up faster. Because heat reduces the effective Young’s modulus of all metals, Durbar, with its significantly higher Young’s modulus, will perform better than aluminium in these conditions. At 500°C, aluminium alloys used for floor plate have lost all their strength, whereas Durbar plate still retains more than two thirds of its ambient temperature capacity.

Being stronger than ordinary mild steels, less Durbar is needed to perform a structural role. Its durability means that it lasts a very long time and can also be used to refurbish existing structures or used again if it is dismantled. Unlike aluminium, Durbar is 100% recyclable without loss of strength or durability. All good news for sustainability.

More than ever, the distinctions that define a product are not only the product itself, but also the ease of obtaining it and using it. Standard-sized S275JR+AR Durbar is readily available in the UK and Ireland, usually within three days, so it is easy to get.

Products with a long history have been tried and tested and bring with them a context of familiarity, experience, reliability and knowledge. This is true for steel and for Durbar too. Plenty of technical information, including load span formulae and tables, are on-line at www.corusdurbar.com if you want to know more about its properties—or you can call or email a technical enquiry service4 with a hundred years of steelmaking and rolling behind it.

If you don’t want to cut it to size, bend it or put holes in it yourself, a network of distributors and processors can do that for you.

With its familiar patterned surface, Durbar has moved beyond industrial spaces to residential, commercial and public areas. This change of direction is not just figurative either. As high-impact skirting and cladding, it is now used in aspects other than horizontal. It is also on the move in vehicles as flatbed surfaces and stepping areas—not surprising for a product that once, in stainless steel, was used in NASA space rockets. And it continues to cross frontiers as bridge decking, spanning rivers and other obstacles. In other places, it waits in case it is needed: fire escapes, for example.

As described in Corus’ forthcoming brochure5, it is indeed “the one and only Durbar”.

Durbar’s non-slip properties and its structural capabilities make it particularly suitable for stairs and walkways. Kwik-Step’s modular stairway system made from Durbar is designed for permanent or temporary installation. It is frequently used on the infrastructure and on construction sites to address the requirement of the Construction (Design and Management) Regulations, 2007, for safe access and egress between workplaces and other areas used by workers. In the application shown, the modules are pinned directly into the slope, minimising groundwork and avoiding the need for foundations. With standard paving slabs at 64kg per step and Kwik-Step modules of four steps at 49kg in total, the Kwik-Step solution is also significantly lighter by using Durbar and still has structural integrity. More information is available from www.kwik-step.com 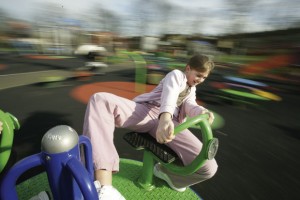 The distinctive characteristics of Durbar have taken it into many applications besides building and construction. Wicksteed Playscapes, the largest manufacturer of playground and sports equipment in the UK, uses Durbar to make strong, safe and exciting play equipment.

The company chose Durbar for its structural capability and its slip-resistant surface. Wicksteed’s extensive range of products demanded a material with high-processing flexibility. The company guillotines, bends, plasma welds, shot blasts, galvanises and powder coats Durbar and describes it as very easy to work with. Durbar’s compliance with EN 10025-2 : 2004, the Construction Products Directive and ISO/TS 16949 : 2002 complement the host of quality certifications and guarantees that are part of Wicksteed’s own quality system.