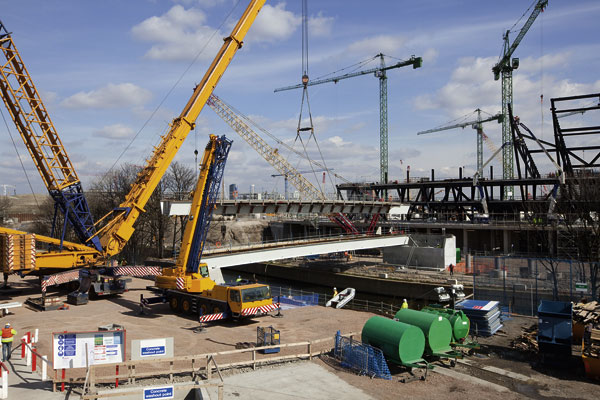 The first of five bridges which will link the Olympic Stadium to the rest of the London 2012 site has been erected by Fairfield Mabey.

A 1,000t capacity mobile crane was used to lift the 41m long 88t steel footbridge into place across the River Lea. With the steel beams in place, work is now under way to install the deck of the bridge and this is expected to be completed during the summer.

The 11m wide pedestrian link will serve the legacy use of the site once the Games are over. Another temporary bridge will also be added alongside this permanent bridge to accommodate increased spectator numbers during the Games.

Olympic Delivery Authority Chief Executive David Higgins, said: “The Olympic Stadium will be at the heart of all activity in the Olympic Park so it is essential we create new links into the site. Lifting the first permanent new bridge into place is an important milestone.”