Factory of the future

April 8, 2020 by NSC in Projects and Features, This month's featured stories 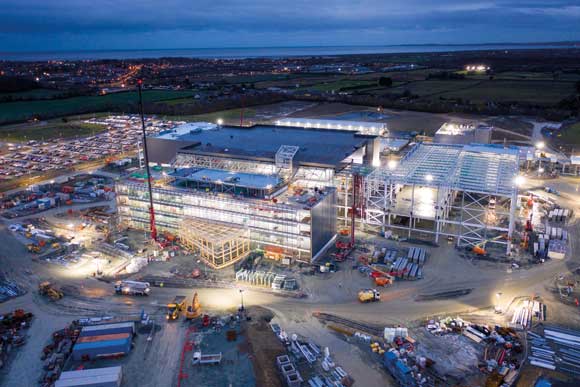 The factory will give the local economy a huge boost.

The company describes the facility as a ‘factory of the future’ as it will be at the forefront of new production methods that will allow the cost-effective manufacture of both small and large volumes of medicines.

Prime Minister of the Republic of Ireland Leo Varadkar was reported as saying that the WuXi Biologics investment represents the start of something very special for the country and Dundalk. “It is the first ever sizeable greenfield project from China in the pharmaceutical sector and it will hopefully pave the way for many more.”

Construction work started early last year with a large-scale earthmoving programme that prepared the ground and allowed the building’s concrete pad foundations to be installed.

All of the facility’s main structures are steel-framed and they consist of a laboratory and administration block, production building, warehouse, and a central utility building (CUB). A final steel tonnage of approximately 5,500t has been erected by Kiernan Structural Steel (KSS) for the job.

Using up to four 120t-capacity mobile cranes for the steel erection, KSS has also installed 66,000m² of metal deck flooring as well as precast stairs. 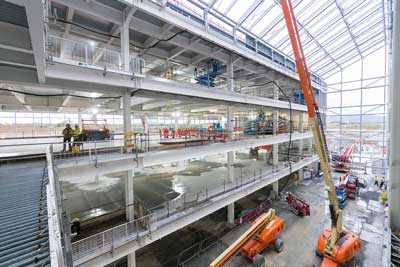 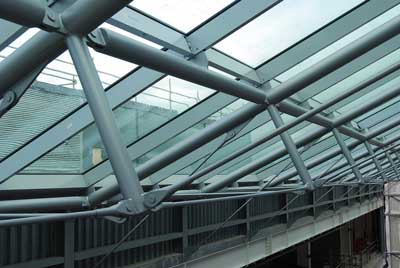 A series of 12m-long trusses form the atrium roof 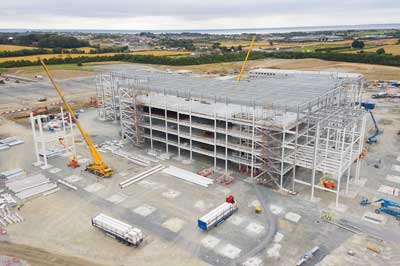 The production building was the first structure to be erected. It is 100m-long × 70m-wide and includes three floors (ground, first and second) and two intermediate mezzanines (named floors 1.5 and 2.5). Steelwork for this large braced frame has been designed around a regular 9m × 9m column grid pattern.

“The erection sequence required us to install the steelwork in individual bays up to the structure’s full height and we generally had up to 80 people working on site throughout the main programme,” explains KSS Construction Project Manager Niall Butler.

The CUB was erected at the same time as the production building. This two-storey structure is located a small distance away from the other buildings, measures 42m × 27m and required 320t of steel.

One end of the production building is connected to the warehouse, via a two-storey link. Although the two are joined, they are structurally-independent and separated by a double row of columns and a movement joint.

The warehouse is approximately 80m-long × 30m-wide and consists of a ground floor and a mezzanine level that occupies roughly half of the structure’s footprint. It has been designed as a twin-span portal frame, with one row of internal columns between two 15m-long spans.

Running parallel with one of the production building’s longer elevations, the four-storey laboratory and administration building is 80m-long × 30m-wide. This braced structure is also independent, but is connected to its neighbour by an atrium.

The atrium is fully glazed and formed by a series of 12m-long roof trusses. The trusses were fabricated from tubular sections and were brought to site as fully-welded completed sections. The trusses represent one of the few steel elements of the project that will remain exposed and on show in the completed project. For this reason, the connections between the trusses and the main steel frames of the two buildings have been designed as aesthetically-pleasing pin connections.

Providing circulation and access routes, two link bridges will span the atrium and connect the two buildings at first and second floors.

The laboratory and administration building is based around a slightly larger 10m × 10m grid pattern, which provides the structure with more floor space.

This building will also accommodate the main entrance, much of which will be housed in an attached timber-framed structure.

The WuXi facility is scheduled to be ready for production during 2021.

Towards the end of last year, WuXi Biologics announced that its subsidiary WuXi Vaccines, engaged in human vaccine contract development and manufacturing is investing US$240M to build a new vaccine manufacturing facility adjacent to the “Factory of the Future”.

Heather Humphreys, Minister for Business, Enterprise and Innovation of Ireland, said, “I am delighted to announce 200 highly-skilled jobs in WuXi Vaccines, which is in addition to the 400 roles announced by WuXi Biologics for Dundalk. The announcement demonstrates, once again, that the Border region is a very attractive location in which to invest.”