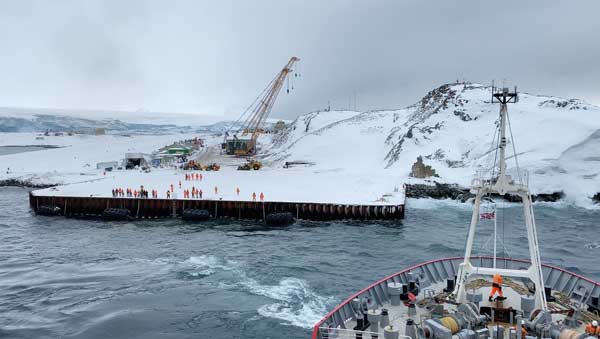 After two Antarctic summer seasons of work, a new steel-framed wharf has been completed at the Rothera Research Station in readiness for the arrival of the new RRS Sir David Attenborough.

With working days limited to the short summer months, due to the severe weather conditions, and transportation links (sea and air) also subject to the meteorological conditions, logistics play a key role when planning a project on the world’s most southerly continent.

Steel construction has proven to be the ideal solution for working in this remote location, as the frame for a new wharf was prefabricated and shipped in erectable pieces to the site.

Due to the practical restrictions of working in one of the most remote construction sites in the world, the construction team practiced a full-scale-assembly before deployment. The 45t steel frames forming the skeleton were tested at steelwork contractor Four-Tees Engineers’ facility to identify any unexpected challenges or additional pieces of equipment that may be needed while still in the UK, which was critical, before shipping the materials 11,000km to Rothera. 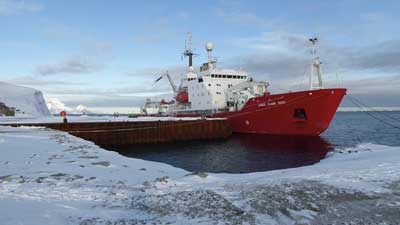 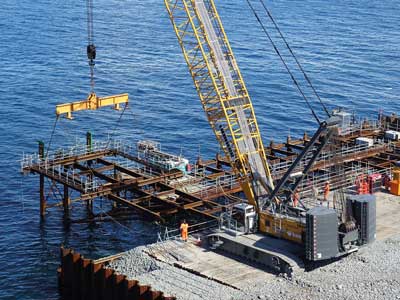 One of the wharf’s steel frames is lifted into place

The success of the new wharf symbolises an effective collaboration between science and industry. Building in one of the world’s most extreme environments required careful planning, digital construction expertise and the ability to work collectively at every stage of the process from client brief, engineering design to supply chain delivery.

Operating safely and sustainably helped overcome potential risks from adverse weather, icebergs and wildlife, such as whales and seals. On site team integration and suitable wellbeing support were essential ingredients for working life, particularly for those who were new to working in the Antarctic.

The new wharf, which replaces a smaller structure built in the 1980s, is part of the Antarctic Infrastructure Modernisation Programme (AIMP), commissioned by the UK Research and Innovation’s (UKRI) National Environment Research Council (NERC). The programme also includes Rothera’s new Discovery Building (see Box) as well as work on other BAS sites.

The 74m-long wharf is designed to accommodate the new polar research vessel, RRS Sir David Attenborough. With its enhanced cargo handling facilities, including a larger crane, the new wharf enables more efficient loading and unloading of supplies, as well as the deployment of small boats used for scientific diving and marine research operations.

Following the trial assembly, all of the 1,000t of steelwork was shipped to Antarctica aboard the DS Wisconsin as part of a cargo that also included plant equipment and 83 containers.

Arriving on site during October 2018, the beginning of the Antarctic summer, the construction team began their work with the dismantling of the old wharf and then erected the initial 10 rear frames of the new structure. The construction decamped in April 2019, returning home before the onset of the harsh southern winter.

“The steelwork was fabricated in single elements for ease of transportation,” explains Four-Tees Engineers’ Managing Director Tim Stedman. “The longest member was 19m long and the heaviest 3t.”

The steel wharf is formed by a series of frames, 10 at the front and a further 10 at the rear. The frames are up to 14m-high, and consist of three vertical tubular piles with beams tying them together at the top level with diagonal braces below. All of the frames are secured to the pile wall with waling beams.

The two sets of frames are connected via a pin at every beam end. The frames were partially assembled at the point of loading, but all the diagonal bracings were fitted on site.

The second season of construction began in November 2019 and completed this year. The returning project team started by de-winterising the site, which involved clearing 2,000t of snow at the start of the Antarctic summer. The team then successfully installed the final 10 steel frames and all the facing sheet piles. The wharf was then backfilled to complete the structure.

Martha McGowan, Rothera Wharf Project Manager at BAM says: “Working in one of the world’s harshest climates has had its challenges, but it’s been a pleasure to work as part of an integrated team where we all shared a common goal. I’m very proud of our team and how everyone worked together to make sure our spirits, health and wellbeing were all taken care of.’

David Seaton, Senior Infrastructure Programme Manager at British Antarctic Survey says: ‘We’re immensely proud of the multi-skilled and multi-partnered team that have successfully completed this civil engineering challenge to schedule and to budget in one of the world’s most remote construction locations. The new wharf will enable Rothera Research Station to remain at the forefront of marine and climate research for generations to come.’

Bruce Wulff, Project Manager at Ramboll, says: “Designing a wharf in the Antarctic, on a steeply sloping rock seabed, with massive icebergs floating past, and Orcas and penguins as your neighbours, has presented its challenges! Four years later, to see this beautiful piece of engineering completed is very moving.” 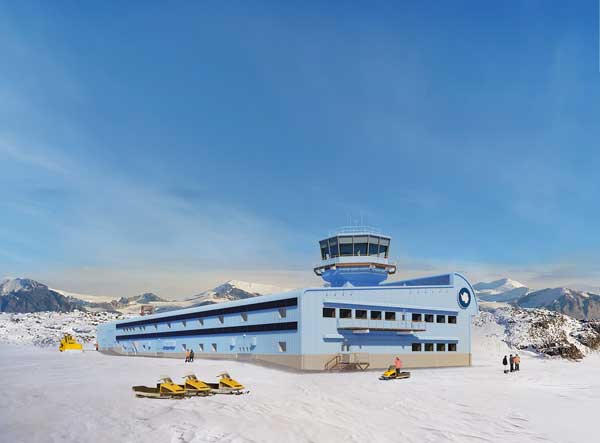 Preliminary groundworks for a new building to facilitate the British Antarctic Survey’s (BAS) ongoing climate related research in Antarctica have begun at the Rothera Research Station.

A steel-framed operations building, named The Discovery Building to commemorate the discovery of Antarctica 200 years ago, is being built.

The energy-efficient, aerodynamic design is oriented into the prevailing wind and utilises a deflector to channel air at higher speeds down the leeward face, minimising snow accumulation around the entire perimeter of the building. It is the first time a snow and wind deflector has been used at this scale in Antarctica.

A control tower protrudes from the mono-pitch roof and provides 360-degree panoramic views of the runway, wharf and station buildings.

Jon Ager, Director of the Antarctic Infrastructure Modernisation Programme, BAS, says: “This is an exciting milestone in a long-term plan to modernise Rothera Research Station. Once built, this new facility will enhance significantly our operational support to deep-field science campaigns.”