September 11, 2015 by NSC in Projects and Features, This month's featured stories 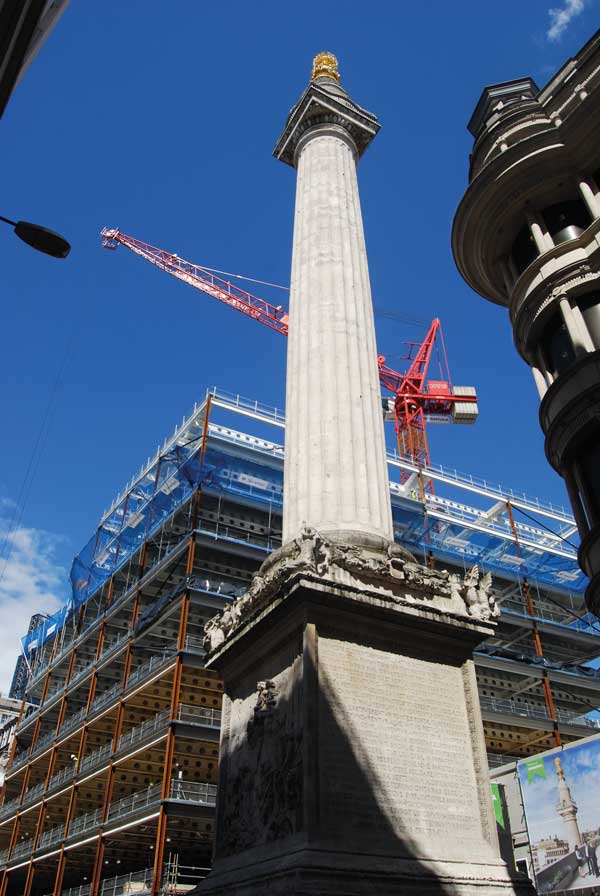 Aiming to achieve a BREEAM ‘Excellent’ rating, The Monument Building will provide high quality office space in the heart of the City. Martin Cooper reports

All of the upper floors of this nine-storey structure will accommodate offices, some of which – floors four, five, seven and nine – feature outdoor terraces.

Structurally, the building has been designed with a steel frame based around one eccentrically positioned concrete core. Below ground level the structure is founded on concrete raft foundations, while a basement and ground slab have also been formed with concrete.

Most of the building is built around a grid pattern offering spans of up to 12m. The spans vary slightly because although The Monument Building is roughly square-shaped in plan to fill up the entire footprint of the plot, the western side of the structure does offer longer spans. 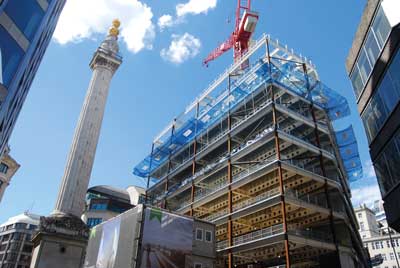 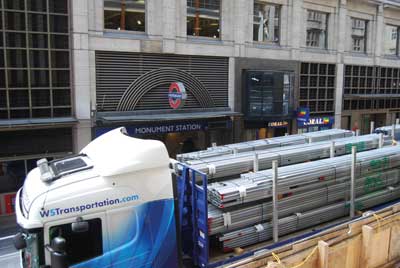 Unloading steel outside of Monument station 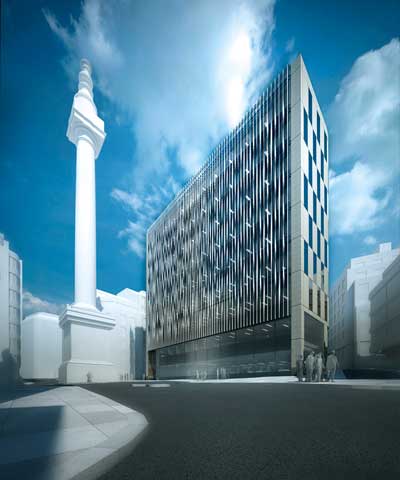 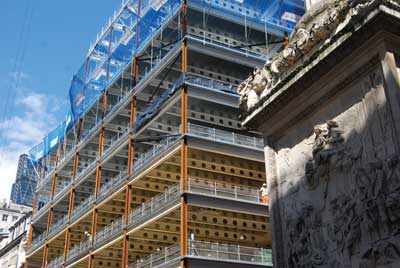 Cellular beams have been used throughout 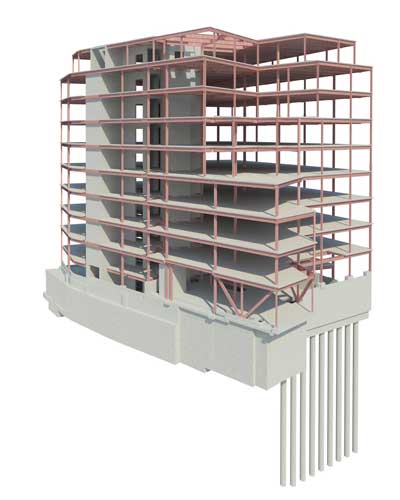 “So we could minimise the structural floor zone, and hence maximise the number of floors, a steel-framed option was the best solution for this project,” says Arup Senior Engineer Michael Heywood. “Cellular beams have been used throughout to accommodate services and in this way we’ve been able to get a nine-storey structure on a site with strict planning height restrictions adjacent to the historic Monument.”

Steelwork contractor Severfield has fabricated, supplied and erected (see below) 650t of structural steel for the project.

Utilising a coordinated multidisciplinary Building Information Modelling (BIM) approach, the project team was able to streamline the design, which in turn helped optimise the steel tonnage to its most efficient amount.

“We always propose that all subcontractors use BIM on our projects as it not only optimises the design but it’s also beneficial as it eliminates any clashes and speeds up the programme,” says Skanska Project Director Brian Nunn.

Speed of programme is always of importance on any site and, to this end, Skanska decided to install the precast stairs inside of the building’s slip-formed core immediately after it was completed.

Having done this work before the steel programme kicked off meant once Severfield did commence work, safe access to the upper floors was already in place, which meant no temporary stairs needed to be installed.

Utilising the project’s one tower crane and a combination of access machines, Severfield erected ground floor to level 3 in one sequence and from then on installed two floors at a time.

With the metal decking being installed a couple of levels behind the steel erection, the programme ensured, for safety reasons, that there were always at least two completed floors in between steel going up and the other follow-on trades.

“The steel erection was sub-divided into four phases for each floor, starting in the south east corner and erectors then working around the core in a clockwise direction,” says Skanska Senior Site Engineer Andy Flynn.

“Once steel was unloaded from the delivery trucks it was stacked on laydown points, which corresponded with the four phases on top of the completed frame.”

Aside from the terraces, formed where the building steps back along its northern elevation, the frame is fairly regimented in design all the way from ground floor to roof level.

The only exception is a pair of storey-high cantilever trusses along the same northern elevation, which ensure that the building does not load an adjoining party wall by transferring the perimeter column loads inwards.

The party wall belongs to the only building that adjoins The Monument Building’s plot and crucially sits atop the Circle and District underground lines, which are just below street level.

“We selected steel for its light structure, which came in handy on the more complex areas of the development where we were close to the underground system. Also known for being an efficient material with sustainable qualities, it was an appropriate choice for the design of The Monument Building,” says Make Architects Partner Cara Bamford.

Although this neighbouring building is adjacent to the new structure, both are independent, apart from the fact that the old building’s outdoor fire escape has had to be removed during the construction programme and will be re-installed later. It will then incorporate a ground floor escape corridor within The Monument Building’s footprint.

“Because of the building’s cascading terraces along this elevation, the cantilever trusses support only four storeys as opposed to the nine across the rest of the building,” says Mr Heywood. “This means we’ve been able to achieve an efficient design that works with both the architecture and building services.”

The Monument Building is scheduled to be complete by May 2016. 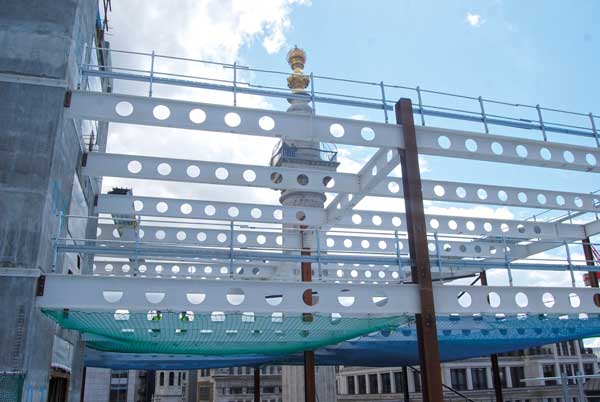 The steel erection programme was completed in July, ahead of its planned 20 weeks schedule.

Severfield Project Manager Robin Hamill puts this down to the close coordination his company had with Skanska and the other trades, which ensured the steel erection and metal decking installation was carried out as efficiently as possible.

“We sat down and started planning the project with Skanska 18 months in advance of steel erection starting,” he explains.

Most inner city sites pose logistical challenges when it comes to deliveries. The Monument Building is no different as it is slap bang in the middle of the City of London and bounded by two narrow, but busy streets on two sides and a public square along its main façade.

Skanska had been able to get a partial road closure on one of the adjacent streets, which allowed the team to create a delivery and offloading zone, albeit opposite Monument Underground station.

All steel deliveries were coordinated and had to be unloaded from 7am onwards when the road closure was in place. Unfortunately, this timing also coincided with the morning rush hour and the team had to deal with the thousands of commuters that regularly exit the station.

“We had to ensure the steelwork was quickly and safely unloaded from the trucks and then placed on our laydown areas which had to be within the building’s footprint – in other words on top of the erected frame,” explains Mr Hamill.