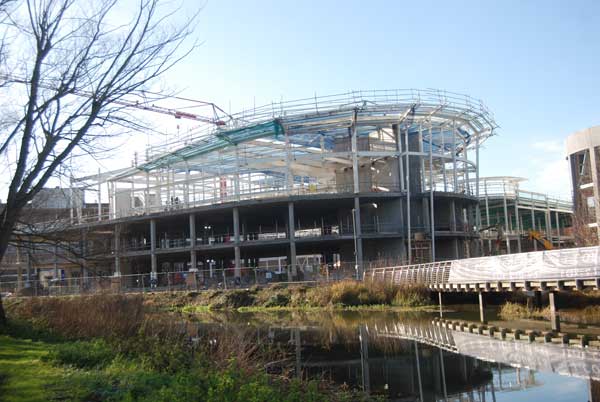 Nestled on the banks of the River Chelmer, the scheme forms phase two of a much larger city centre regeneration scheme that previously included the construction of three blocks of riverside apartments (see NSC November 2007).

Steel construction is playing a leading role in the building of the Bond Street scheme, as all of the structures are steel-framed with the exception of the cinema block, which is a hybrid building. It consists of a two-level concrete lower part, which will house restaurants, supporting a steel-framed upper level accommodating the cinema complex.

The site was previously occupied by a large city centre surface car park and so, when work began early last year, there was no demolition required. Instead a large earthmoving programme kicked off the development as the underground car park was excavated. 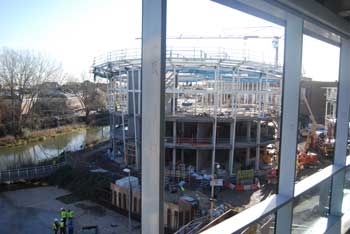 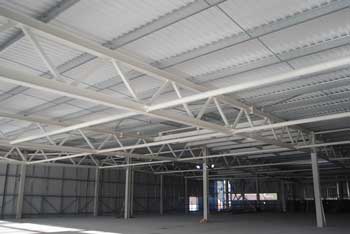 Working in areas that had previously been excavated and piled, design and build steelwork contractor Caunton Engineering began the erection process with the John Lewis store.

The 11,148m² John Lewis store consists of three trading levels – ground, first and second. For ease of programme this steel-framed structure was the first to be erected.

“It’s the furthest from the site’s access point and so it made our job less challenging to work on this building first and then work our way out of the site by way of the other buildings,” says Caunton Engineering Contract Manager Adrian Downing.

Caunton’s erection sequence was also dictated by the groundworks programme, as excavation and piling work had to precede the steelwork. Another reason behind this store being erected first is the fact that it is the development’s anchor and potentially it will need the longest fit-out programme before it is ready to open.

The store is based around a 9m × 10.2m grid pattern for all of its levels except the uppermost retail floor where alternate rows of columns have been omitted to give a more open-plan area.

Forming a pitched roof over this top retail floor are two rows of 21m-long × 1,800mm deep trusses. Caunton brought the trusses to site in two pieces and then after bolting them together they were lifted into place using one 50t-capacity mobile crane.

Block One, which houses 10 double-height retail units and is structurally attached to the John Lewis store forming one large braced frame, was the next structure to be erected.

The same 9m × 10.2m grid is also used to form Block One as well as the adjacent Block Two retail building. This grid was deemed to be the most efficient for both the retail buildings and the underground car park, which sits beneath all of these blocks.

The majority of the columns forming the car park extend up into the retail floors, however there are a number of instances where this is not possible. For example, many of the Block One and Block Two columns above basement level have been relocated into partition walls to create an open-plan shop area.

This means a number of large transfer beams have been installed at ground floor level. Typically these transfer beams are 914UB section sizes of various weights, and some span up to 18m and support two columns up to roof level.

An uncovered pedestrian mall separates John Lewis/Block One from Block Two, while another mall, positioned at right angles to the first, separates these buildings from the cinema structure.

“The position of these malls and the fact that they do not run perfectly straight also meant that we had to install a number of transfer structures within the ground floor area,” says Caunton Engineering Project Engineer Gavin Christie.

The cinema was possibly the most complex steel frame to be erected and required more than 1,000 individual sections. Sitting atop two concrete levels, the steelwork is based nominally on a 6m-perimeter grid, although this changes slightly to accommodate the structure’s shape that incorporates a bull-nose feature at one end and a rounded point at the other.

“The piece count was so high because there is a complicated cantilevering roof feature that wraps around the bull-nose,” explains Caunton Engineering Senior Structural Engineer Colin Winter. “It slopes and widens to a maximum depth of 3m and required a lot of secondary steelwork.”

The steelwork for the cinema is tied into a couple of stair cores, as installing bracing was not an option due to the lack of areas in which to put it. Both ends of the cinema feature mezzanine levels, while in-between the five cinema auditoria vary in size with the largest requiring roof rafters with a span of 16m.

The steel erection programme was completed by the end of February and the last structure to be erected was retail Block Three. This stand-alone braced frame houses further double-height outlets and is separated from Block Two by the car park ramp and the development’s service yard.

The Bond Street development is scheduled to open before Christmas. 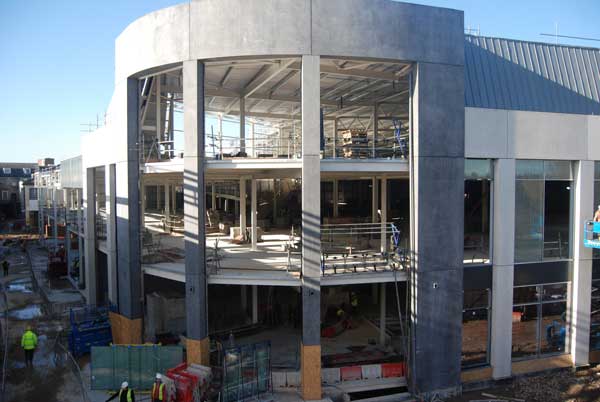 The project’s elevations consist of a number of different and complicated cladding types including masonry, render, stone and aluminium panels.

The retail units along the mall and Bond Street also feature an 800mm wide coping stone at parapet level.  These are generally offset from main columns and this led to an intricate secondary steelwork framing system being required to support the coping stone and also the cladding system.

“As each retail unit has a unique set-out, the design of these elements was a time-consuming process. Utilising the combined architect and steelwork 3D model proved extremely beneficial in speeding up design, by aiding set-out and helping to visualise support requirements,” explains Caunton Engineering Project Engineer Gavin Christie.