November 18, 2016 by NSC in Projects and Features, This month's featured stories 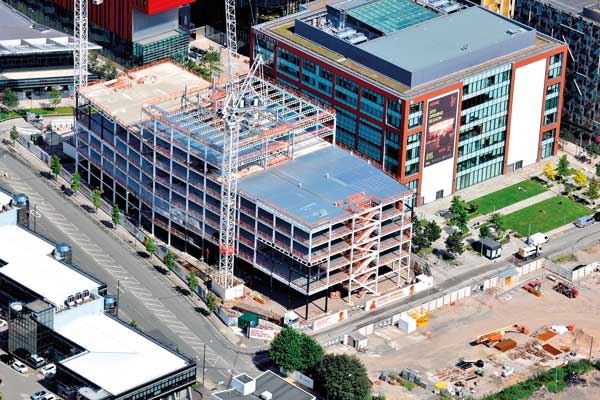 A number of these facilities have already been completed on the scheme, including a cultural centre, hotel, 700-space car park as well as retail and student accommodation blocks.

With much more to come, the 8 First Street commercial building is seen as the anchor office development, completing the northern zone of the development, while enhancing a new public realm and extending interest along the scheme’s main pedestrian route [First Street].

The building will provide 14,600m² of Grade A office accommodation within a seven-storey building that will also include 1,300m² of retail space at ground floor level.

Structurally the building is a steel frame, formed around a central braced stability core. Perimeter columns are at 6m centres, while minimal internal columns create the clear spans of 12m and 13m that agents and tenants nowadays demand. 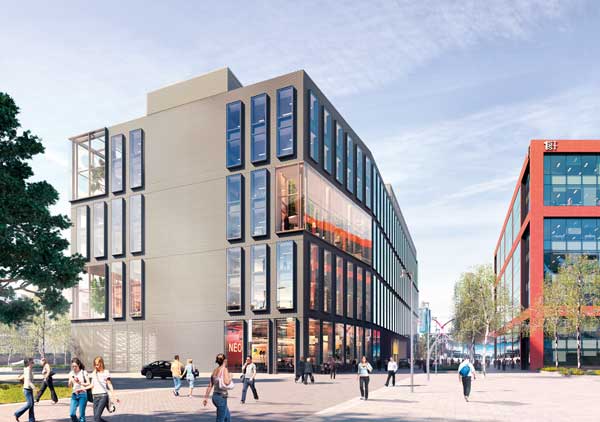 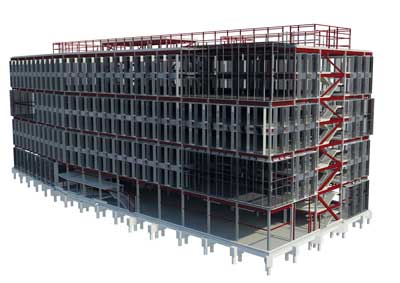 “The Westoks were pre-cambered to take out the wet concrete deflection of the floor plate,” says Kloeckner Westok’s Design Team Leader John Callanan.

A braced stability core located centrally within the building footprint, acting in conjunction with just two additional braced bays to either gable end, removed the need for a movement joint in the almost 100m-long building. Importantly this also provided the aesthetic benefit of not requiring diagonal bracing in the main external elevations.

Commenting on the design, Ramboll Technical Director Gary Willis says: “The project was always likely to be a steel-framed building, although having looked at many alternative options early in the design stage, we were able to confirm that steel was the way to go.”

“Once a steel frame was chosen as the most efficient construction method, the building’s design quickly evolved around the requirements of the cladding system.”

As 8 First Street occupies a prominent position and will be seen by thousands of motorists every day, the landmark building has a striking elevational treatment, with two-storey high ‘punched’ windows projecting forward from a contemporary architectural mesh that also wraps into the entrance lobby and other key internal spaces.

Assessment of a range of grid spacings confirmed that the modest 6m perimeter column spacing, typically accommodating a pair of the two-storey high windows, minimised the challenge of edge beam deflection versus allowable movement in the more affordable cladding solutions.

The ‘punched’ windows will be installed as pre-assembled 7m × 1,800mm bespoke cassettes, not only containing the glazing but also the surrounding composite return panels and flashings.

The prefabricated cassettes are formed on hot-rolled secondary steel frames, secured to the concrete floor slab via cast-in channels, which provide a large degree of adjustment to deal with normal construction tolerances.

A key architectural feature, that will set this office block apart from others, is a series of six internal winter gardens.

These two-storey high glazed naturally ventilated spaces are placed in a staggered formation, around the building perimeter, two per floor on levels 1, 3 and 5.

With a range of planting and seating, they will provide break-out space for the building’s occupants.

In order to accommodate the winter gardens, the floor plates, at levels 2, 4 and 6, have been cut-back, with access to these break-out areas provided at each lower level.

The building’s large clear spans are maintained above and below the two-storey winter gardens, and so the cut-back floors and internal cladding lines are supportedby being hung from the full floors above, as well as being supported by the full floor below.

Floor-to-ceiling heights throughout the building, with the exception of the gardens, are set at 3.9m, however the ground floor is a double-height zone at 6.9m high.

As well as accommodating the main entrance lobby, this level also houses mezzanine floors for the retail units and back-of-house bicycle storage.

Founded on piled foundations, steelwork contractor Elland Steel Structures began its erection programme in May. Using the site’s two tower cranes for the majority of the lifting, the steelwork was completed during September.

“Logistics have been a key factor on this job,” sums up Carillion Project Manager Paul Holt. “Although we have seven gates to feed the job with materials, it is an island site and as the building occupies most of the footprint there is little room for storage.

“Luckily we have space on an adjacent site, where our site cabins are located and where the next phases of the First Street development will be taking place.”

8 First Street is scheduled for completion in September 2017.

What’s in a name?

Where did the name “First Street” come from?  Over many years, the First Street area had been known by a number of different names so in 2008 the developer embarked on a rebranding exercise necessary in order to enhance the area’s reputation.

Consequently the name First Street was decided upon, as it had been more than 20 years since a new street on this scale has been created in Manchester city centre.

Although the name reflects the key feature of the scheme’s public realm – the new 300m long × 18m wide tree-lined street – the vision was to extend that name to the wider neighbourhood.

First Street now anchors the extended area, helping to deliver a neighbourhood of choice within this key gateway location at the southern edge of Manchester city centre.