September 14, 2012 by NSC in Projects and Features, This month's featured stories 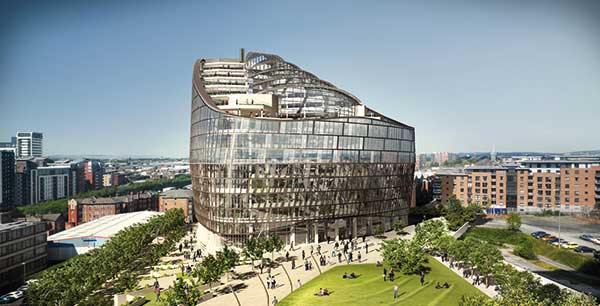 Utilising thermal mass can reduce a structure’s operational CO2 emissions while also contributing to overall cost savings, and can be achieved as easily with a steel frame as it can with a concrete alternative.

The predicted rise in temperature in the coming decades, due to climate change, added to rising energy costs, have driven the need to construct buildings that are more energy efficient in use. Designing for optimum thermal mass is part of the solution and this is perfectly possible to achieve with a steel frame, say industry experts, refuting the popular claim that only a concrete structure will do the job.

For a number of years some designers have used this myth to explain their choice of a concrete frame. “It’s a common misconception that a building needs to have large volumes of concrete to achieve thermal mass. In fact the first 50-75mm of an exposed concrete soffit is the bit that does all the work – the thickness of material exceeding this is thermally neutral  in its beneficial effects on the space below,” explains Edward Murphy, Mott MacDonald Technical Director.

Thermal mass is the ability of a structure to absorb excess heat. The area with the most thermal mass, in the majority of non-domestic buildings, is the concrete floor slab and for this to work efficiently it requires the soffit to be left exposed, with no suspended ceilings.

The theory of thermal mass assumes that during the day, solar gain, electrical equipment and human activity all generate heat that warms the air in a building and may make the environment too warm and/or humid for productive work. Most buildings would use air conditioning to artificially cool the internal environment to elimate this problem.

The use of thermal mass reduces peak temperatures and also delays the times at which these temperatures occur.

Over a 24 hour cycle, optimum thermal mass is provided by the first 75-100mm of exposed concrete, anything more provides little extra benefit.

Effectively using thermal mass can in many cases remove the requirement for air conditioning. As mechanical cooling is energy intensive, this can have a huge impact on a project’s cost, but also more importantly it will significantly reduce CO2 emissions.

Many recent projects have benefited from achieving and optimising thermal mass using a steel framed solution. The following case studies are just some examples of this. 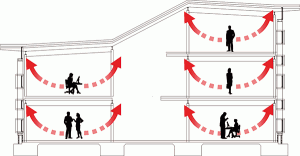 During the day, solar gain, equipment use and human activity generate heat, which warm the air in a building. The warmed air rises, flows across exposed surfaces and is absorbed into the fabric of the building. 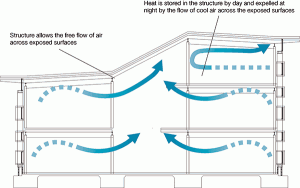 At night, cool air is allowed into the building and flows across surfaces which have been used to absorb heat during the day. These surfaces are then ready to absorb heat again the following day. 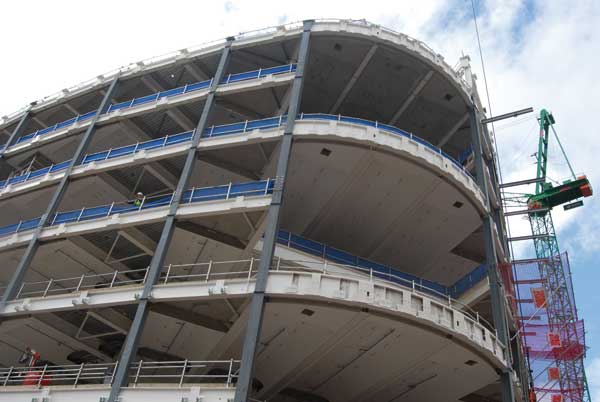 The 16 storey Co-operative Group headquarters represents the first phase in the redevelopment and regeneration of the Co-op’s 20-acre site, located at the city’s northern gateway. The structure will include around 30,000m2 of open plan office space, providing modern working facilities for the Co-op’s staff.

The client wanted the project to be a sustainable landmark by becoming the first building in Manchester to achieve a BREEAM ‘Outstanding’ rating. 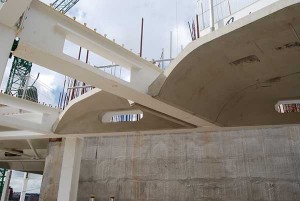 he centre of the building is hollow, as a large triangular atrium extends from ground floor all the way up to a sloping roof, a glazed structure that follows the line of terracing that slopes down from level 16 to nine.
To coordinate the structural engineering, architecture and building services, 3D BIM technology was used. The software also provided energy models. Using the building’s thermal mass formed a key part of the design, with concrete planks left exposed within the steel frame.

“Steel was the natural choice for the framing material as it gives us the required large column free floors levels and the option for future flexibility within the building.” 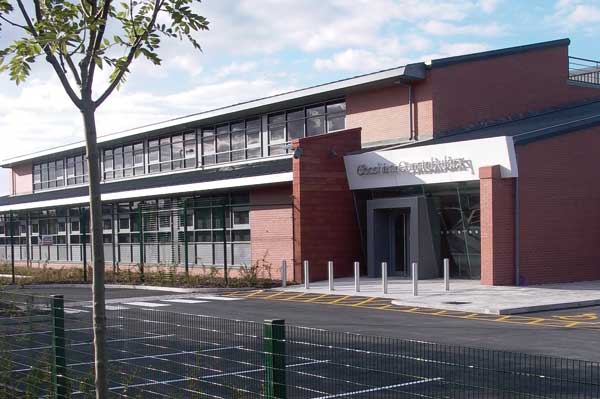 Mott MacDonald and Fairhurst were commissioned by Cheshire Police to design its new 2,800m² headquarters in Blacon. Sustainability and energy efficiency were key objectives for this project along with cost and the need for a quick delivery.

The team opted for a steel framed solution, rather than concrete, due to the relative cost and time savings the material offered. The steel framed building was designed to achieve thermal mass, providing ‘inertia’ against temperature fluctuations.

Edward Murphy, Mott MacDonald Technical Director says: “Thermal mass can, if designed correctly, be just as effective within an exposed precast floor with a steel frame as it can within a concrete frame. In this instance we chose to use steel with precast because of the cost and time efficiencies that it offered.”

As a result of using a steel frame to achieve thermal mass, approximately 5% was saved on the cost over a concrete solution and the job was completed four weeks earlier than would otherwise have been expected. 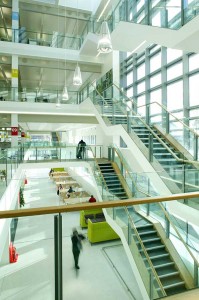 The £38M Birmingham City Council office development on Woodcock Street was completed in October 2011 and provides approximately 22,000m² of accommodation over five floors for over 3,000 employees.

Birmingham City Council wanted the development to be a flagship project for both sustainability and collaborative working. Main contractor Thomas Vale needed to balance this aspiration with a challenging timescale.

A steel framed solution was the only option that allowed the team to meet the challenging time programme. The building’s floors were steel beams supporting 200mm thick hollow core concrete planks, left exposed to mobilise the thermal mass. As the majority of the beams supporting the floor planks were cellular this eased the transfer of cool night air across the soffits. This negated the need for excessive mechanical cooling of the building via air conditioning, offering significant cost and carbon savings.

The BREEAM ‘Excellent’ rated building was delivered on time and on budget, while simultaneously achieving around a 31% reduction in operational CO2 emissions compared to the minimum standards required for Building Regulations Part L compliance. 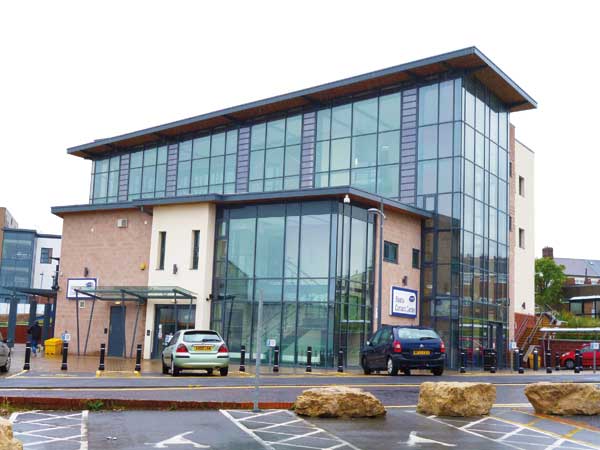 St Johns Square is a multi use, four-storey council office block that formed part of a £19m redevelopment of Seaham town centre. The building houses a public library and cafe as well as offices for Durham County Council and Seaham Town Council.

The project team’s aim from the outset was to reduce running costs and strengthen the scheme’s sustainability credentials. The building needed to be kept cool in summer and warm in winter, sustainably.

A steel framed solution, comprising a composite steel deck floor slab was decided on as the best solution, to incorporate natural ventilation and thermal mass to control building temperatures.

Alasdair Cameron, Durham County Council Design Engineer, says: “We wanted a naturally ventilated building with a design that would help cut down running costs and lower emissions. We also wanted to optimise the thermal mass by exposing the floors to allow them to absorb heat during the day and dissipate it at night.”

The building has achieved a BREEAM ‘Very good’ rating. 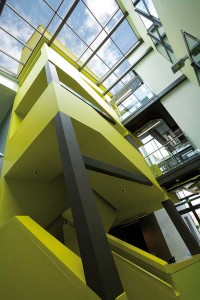 One Trinity Green is a managed workspace building in South Shields, offering 41 flexible office, workshop and hybrid units, within a 2,700m² structure.

Sustainability was a major area of focus from the outset and achieving BREEAM ‘Outstanding’ was a contractual requirement.

Extensive thermal modelling was undertaken to inform a detailed mathematical simulation of the building’s thermal environment.

Using this simulation, the team was able to make informed decisions about all elements of the building. It also highlighted the opportunity to combine the building’s steel frame with steel decking and composite concrete floor slabs, in order to optimise thermal mass. The design team made this a key part of the design and targeted the look and feel of a ‘modern Victorian warehouse’.

One Trinity Green is an Energy Performance Certificate ‘A’ rated building with a 20% improvement over the requirements of Part L.