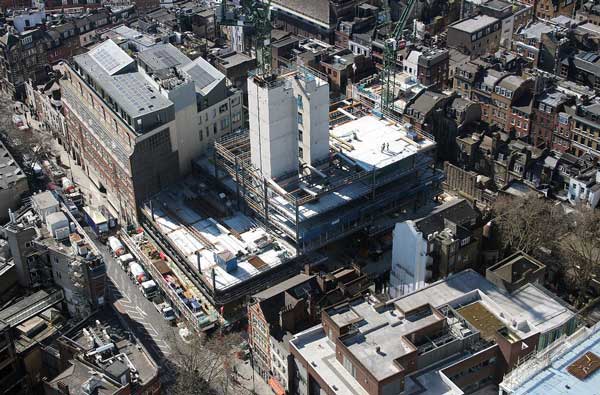 Occupying the plot previously occupied by the famous Foyle’s book shop, Ilona Rose House is a new 27,800m² mixed-use development that will include ground floor shops and restaurants, office space on the upper eight floors including garden terraces, and a four-level basement that will house Warner Brother’s European post-production studios, including a double-height 60-seat editing theatre.

Surrounding the building, a large portion of the site is dedicated to new public realm space with a new café and restaurant-lined mews linking Manette Street to Greek Street. The mews will also provide an entrance to the extensive subterranean creative office and post-production space.

Aiming to achieve a BREEAM ‘Excellent’ rating, the scheme also includes redevelopment of 14 Greek Street, a Grade II listed building, which will be protected and carefully restored. Next door at 12-13 Greek Street the façade of the building is being retained while eight affordable housing flats are constructed behind it.

The main building consists of a steel-framed superstructure, which is erected around a centrally-positioned concrete core.

Cellular steel beams, used to accommodate services within their depth, have been used throughout.

Sir Robert McAlpine Project Director Allan Cameron said: “From the outset, William Hare has worked hand-in-hand with structural engineer Tier Consult to provide the most efficient solution with a key consideration given to buildability.

“With a fully coordinated and integrated 3D model in place prior to any site works commencing, all key interfaces have been resolved reducing the risk of any on-site clashes.”