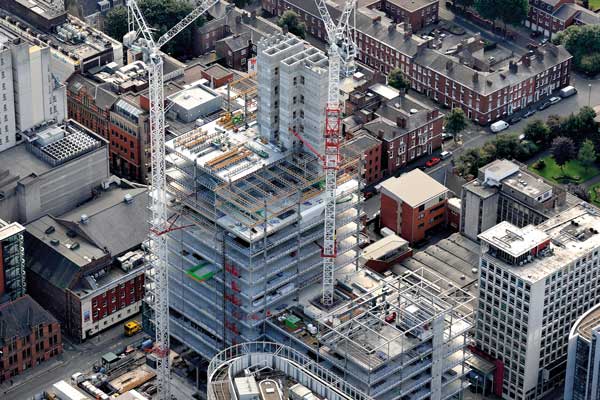 The UK’s regional cities are experiencing near-record levels of construction activity as developers invest heavily in commercial and residential real estate, according to the annual Deloitte Real Estate Crane Survey.

According to the survey, there has been a sharp upturn in urban development across a range of sectors including commercial offices, hotels, retail, and student housing.

In Birmingham, approximately 130,000m² of new office space is currently under construction – a 50% increase on the previous year. This is the highest level of activity since this crane report was first published in 2002.

Manchester’s city centre has a record 22 residential projects breaking ground on site last year, as well as a host of high-spec office schemes.This was eight more than the previous high of 14 in 2007 and is scheduled to deliver nearly 7,000 units to the market.

Leeds saw 20 major construction schemes complete in 2016, including the highest level of office space delivered to market since 2007, and the city also recorded six new office starts in this survey.

Retail was dominant in Leeds as the delivery of new shopping areas doubled the average annual total of retail space with nearly 55,700m² brought forward in 2016.

Simon Bedford, local government development partner at Deloitte Real Estate, said: “The results reflect the growth and resurgence in the regions, breaking records set more than a decade ago.”