The Collaboration Space has a challenging steel-framed design

Two steel-framed structures will house and service the Met Office’s new supercomputer, a device that will bolster the UK’s position as a world leader in weather and climate prediction.

As well as helping the Met Office to improve its weather predictions, the computer will also be a catalyst for regional growth in the South West, supporting collaboration and partnerships between science, business and academia.

Located a short distance from the Met Office’s current headquarters, the computer will be housed in a purpose-built structure [IT Hall] currently being built by a team led by main contractor Willmott Dixon. Adjacent to this, a distinctive sloping two-storey office structure, known as the Collaboration Space, is also under construction.

The IT Hall is a single storey steel portal-framed structure measuring approximately 90m-long and 25m-wide, but importantly offering a central 15m-wide column-free span for the computer hall.

The Collaboration Space is a far more complex steel structure leaning in two directions, which has required enhanced stability systems to resist the forces generated by the complex and eccentric geometry.

Both of these buildings have gone through a process of design development as WSP Parsons Brinckerhoff Associate Director Ian Branch explains: “Throughout the design process, a variety of materials were considered for both buildings. The choice of steel was made primarily to suit the challenging programme requirements.

The supercomputer will be housed in the IT Hall 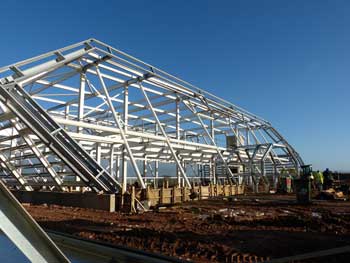 Sloping CHS columns create the elevations of the Collaboration Space

“The use of Revit 3D modelling greatly benefitted the development of difficult details for the complex geometry. This was then easily transferred to the steelwork contractor for them to incorporate into their model.”Once the design was finalised work started on site last year. The project sits on a greenfield site on the edge of Exeter Science Park, a recent development on the outskirts of the city that has further expansion plans

Steelwork erection started with the IT Hall, the simpler of the two frames. This structure had to be the first to be erected as it houses the supercomputer and consequently needs to be ready first. Powering and serving the computer are a high volume of complex services, all of which needed to be coordinated via 3D modelling in Revit.

As it will house the supercomputer, the IT Hall may be considered to be the more important of the two structures. However the hexagon-shaped Collaboration Space was the most challenging to design and erect.

The structure’s accommodation space is formed around a two-storey internal box based around a 7.2m × 4.8m grid pattern. The two main elevations, with the front sloping inwards and the back doing the reverse, are built from this steel box.

The internal box was erected first and was initially stabilised by temporary bracing. An in situ concrete lift shaft, combined with moment frames and braced bays within the sloping walls, provided the stability in the final condition.

CHS columns set at an angle of 60 degrees form the two sloping elevations.

“Tubular steelwork was chosen for this part of the structure for aesthetic reasons as it will be left fully exposed behind glazing,” explains WSP Parsons Brinckerhoff Senior Engineer Catherine Mungall.

As well as the two main sloping façades, the structure has two folded ends formed by two rows of raking CHS columns. To form the fold, the bottom members slope outwards and the top sections slope inwards with a central bolted connection holding the shape in place. The columns were all designed as moment frames.

As well as the two large glazed façades, the remainder of the Collaboration Space will be wrapped in zinc cladding.

“To avoid any clashes and deal with the unusual geometry and complex cladding details on this structure we laser-surveyed the building to produce a 3D model,” explains Willmott Dixon’s Leigh Dickson.

“This way of producing a model is very fast and allowed the team to get on with the cladding installation quickly.”

The Met Office supercomputer is being installed in three phases with the final phase due to be completed in Spring 2017. 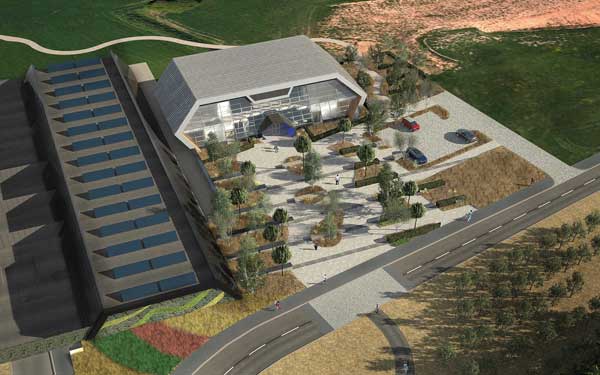 The supercomputer will be 13 times more powerful than the current system used by the Met Office and will have 120,000 times more memory than a top-end smartphone. It will be able to perform more than 16,000 trillion calculations per second, and at 140t it will weigh the equivalent of 11 double-decker buses.

The supercomputer’s sophisticated forecasts are anticipated to deliver £2bn of socio-economic benefits to the UK by enabling better advance preparation and contingency plans to protect homes and businesses.

Met Office Chief Executive Rob Varley says: “We are very excited about this new investment in UK science. It will lead to a step change in weather forecasting and climate prediction, and give us the capability to strengthen our collaborations with partners in the South West, UK and around the world.”