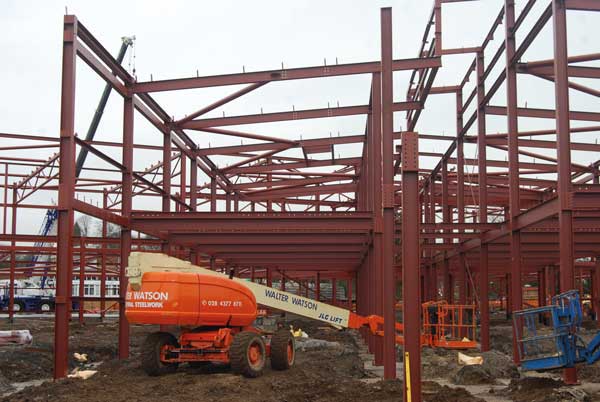 A series of complex steel interfaces between one and two-storey elements have contributed to a challenging steel programme for a new school in Antrim, Northern Ireland.

Parkhall Integrated College will replace the nearby existing school, which will be demolished as part of the final element of the project, providing space for new sports pitches.

Main contractor O’Hare & McGovern began work last year and approximately 650t of structural steelwork is being fabricated, supplied and erected for the project by Walter Watson.

“The building on plan is a skewed H-shape and the main challenge for us has been maintaining the ridge heights, as well as marrying in the roof slopes at the various intersections,” says Walter Watson General Manager Structural Division Trevor Irvine.

As the school is a mix of one and two-storey parts, the roof structure has some very complicated interfaces and geometry where sloping and curving elements meet.

Catering for pupils aged between eight and 12 years old, the school is being constructed for 735 students and will open its doors from September 2017. The entire project, including the demolition of the existing buildings and the creation of new sports pitches, will be completed by 2018.