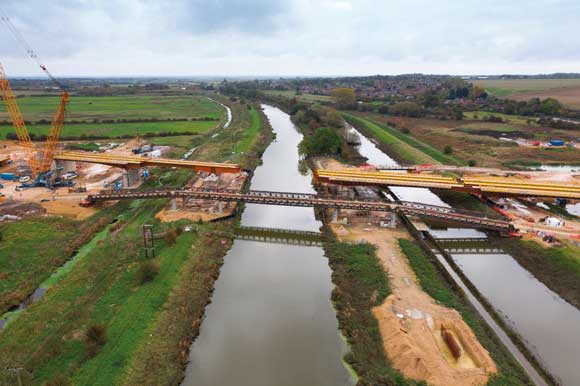 The successful installation of a five-span bridge across the River Witham in Lincolnshire is testament to the capabilities of the project engineers and the benefits of collaborative working.

Cleveland Bridge was awarded the contract for the supply and installation of the 1,400t, 225m-long River Witham Bridge, which included substantial haunch girders, manufactured in weathering steel.

According to Cleveland Bridge, while the production process was straightforward, the challenges for the transportation and installation of the bridge components were many and varied, requiring extensive planning, close collaboration with suppliers and main contractor and the expertise of the steelwork contractor’s highly experienced team.

The bridge girders had to be transported to site by road, a task that included travelling through the centre of the historic city of Lincoln. In order to reach the site, the delivery team also had to negotiate a restrictive road network close to the site, which meant that only relatively shorter girder lengths could be delivered to the north bank of the river.

To meet the County Council’s objective to have the Lincoln Eastern Bypass open in 2020, construction of the structure on site was scheduled for autumn/winter 2019. This is a challenging time for any bridge installation due to the weather conditions and this project was further impacted by the location being on a flood plain. 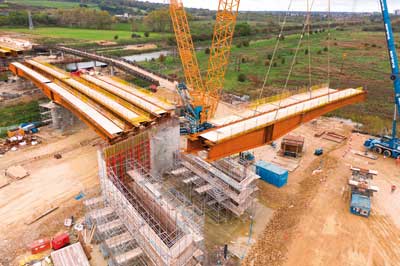 The girders were delivered to site in 27 pairs 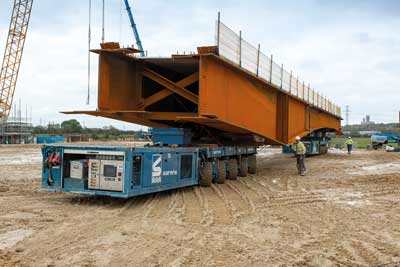 In order to be installed, bridge girders were tranported to the crane by SPMTs

This led to the site being inaccessible for sustained periods as a result of inclement weather conditions, further reducing the installation timescale afforded to the project team. The installation window was also minimised by activity on the River Witham, which is a busy waterway, preventing extended periods of closure.

The location presented numerous further challenges, which were successfully overcome through innovative and creative approaches. Most notably, for the installation, the project team had to manage a very wide workable area as a result of dykes running parallel on both sides of the river.

As a result, and primarily because the reach required and weight of the components would be so significant, Cleveland Bridge worked closely with cranage specialist Sarens for the use of a specialist 1,200t-capacity crane, which is one of only a handful in the UK.

In total the bridge consists of six (three pairs), 225m-long bridge girders, but these components had to be manufactured as smaller sections, due to the site having a very compact and restrictive assembly area.

Cleveland Bridge delivered the girders to site in 27 pairs, which varied in length from 16.7m to 31.6m. Each pair had its main cross member bracing installed in the factory as the girders were paired up, while the smaller bracing that links the pairs was installed after the steelwork was lifted into place.

Preparing the components for installation was complicated by the limited assembly area, requiring the use of self-propelled modular transporters, also provided by Sarens, to move the girders to the crane. The location of the crane on the site also brought challenges, with three pairs of girders placed at the top of an embankment, which required them to be transported down a steep slope in order to place them in position for installation.

To mitigate the issue of the long work area over the watercourses, including the span of the river and the dykes, the girders were installed in two sessions with the crane positioned on one bank of the river to install half of the bridge girders, and then transported to the opposite bank to erect the remaining girders.

This meant installation engineers only had to work over the water to join the central splices to compete the steel erection.

Due to the size of the crane and the weight of the required lifts, considerable preparatory works were undertaken, including piling, to withstand extremely large ground bearing pressures in close proximity to the river.

The weight of the lifts was increased significantly by the addition of the deck and parapet formwork, which was fitted to the spliced girders by Galliford Try prior to erection. However, this minimised further work at height and provided a safe working platform for the subsequent casting of the concrete deck slab.

Installation of the bridge was completed in December 2019, enabling the County Council to maintain its timescale for the opening of the Lincoln Eastern Bypass project later this year.

Cleveland Bridge Project Manager Dan Sowerby said: “Delivering this project with optimum efficiency is testament to the expertise and collaborative working employed throughout the process.

“It enabled the project team to overcome multiple challenges, particularly from the site location and the autumn/winter weather conditions, through an innovative approach to problem solving and the combined capabilities of the parties involved.

“The comprehensive working practices we employed on site, which was endorsed by Cleveland Bridge winning the 2019 Make UK award for Health, Safety and Wellbeing, ensured that the project was completed with no accidents, contributing to the company achieving more than one million hours with no reportable RIDDOR incidents and an Accident Frequency Rate of zero.” 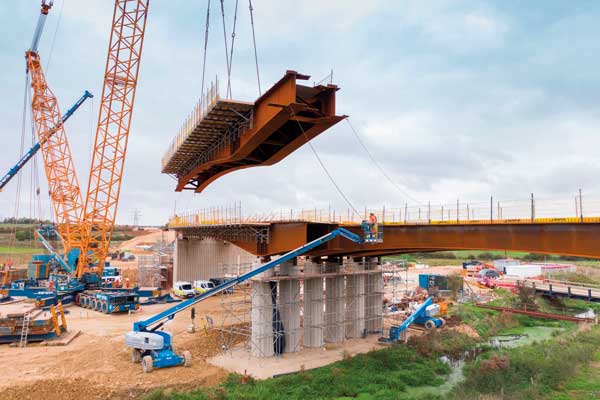