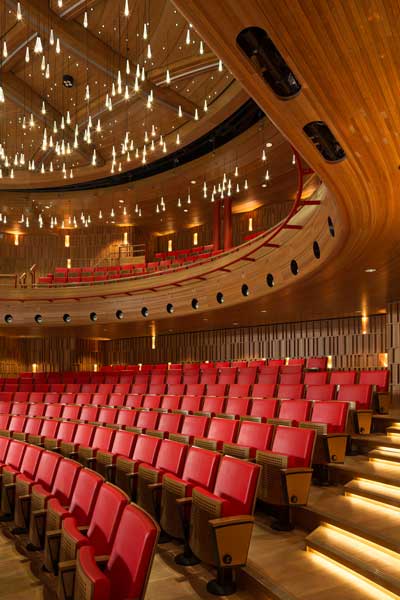 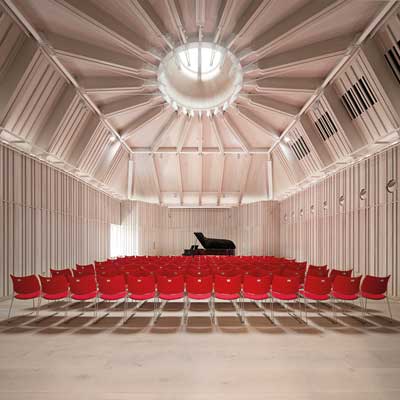 The redevelopment of this world-renowned academy has transformed its existing theatre and provides a new rooftop recital hall.

A number of innovative structural steelwork solutions were used in the redevelopment of the Royal Academy of Music’s historic Grade II listed buildings.

The works, carried out on a site surrounded by operational buildings used by students and staff, included the replacement of the existing theatre superstructure, the addition of new cantilevered balcony seating, the introduction of a flytower (with main plant room above), an enlarged orchestra pit, insertion of new vertical circulation routes, and a box-in-box rooftop recital hall with its own glazed foyer.

The existing theatre was considered to be ill-equipped and badly shaped and has been remodelled to provide a 40% increase in seating capacity.

A slender cantilevered horseshoe 100-seat balcony has been introduced into the theatre, the structure of which mainly consists of a system of steel beams cantilevering off hidden two-storey steel columns, which in turn sit on the existing stalls concrete bowl slab.

A feature auditorium ceiling has been introduced to provide a visual focus and to maximise the acoustic volume of the theatre. This ceiling is created with a system of downstand secondary, tertiary and quaternary beams facetted on plan and clad in curved timber.

The roof and flytower are in turn supported by a deep upstand plate girder to the rear of the balcony, and two novel hybrid storey-height combined steel trusses and plate girders. These give space at the edges of the spans at rooftop level for circulation space and a plant room.

To each side of the stage, two-level theatre technician perches were installed, utilising steel beams within the depth of timber joist floors to minimise the structural depth, with the beams in turn supported by a mixture of steel posts and hangers to reduce the impact on the stage.

Above the redeveloped theatre, the opportunity was taken to add a new, partially exposed, steel-framed 100-seat flexible recital hall, entirely isolated acoustically (slab and walls) from the surrounding structure.

Located next to the Recital Hall and flytower is a circulation space with a glazed roof. It is formed by tapered twin steel fins that are supported by closely spaced stainless steel cables, inspired by the aesthetics of string instruments. The cables are supported by the Recital Hall and plant room and for almost all of its length the fins do not require any structural support from the original rear façade of the Academy’s main building.

Commenting on the use of steelwork, WSP Project Engineer Daniel Cowan says: “Structural steelwork has provided a high quality, lightweight, flexible solution to this challenging redevelopment project with the creation of long-span structures seamlessly integrated with the architecture and services installations.

Jonathan Freeman-Attwood, Principal of the Royal Academy of Music adds: “The spaces are stunningly beautiful and inspiring. They will raise the bar and challenge the students and staff in every possible form of music to reach higher and search further.”

Summing up, the judges say a highly-integrated design of the steel roof trusses has allowed the team to squeeze in a rooftop recital space without compromise to the auditorium below.