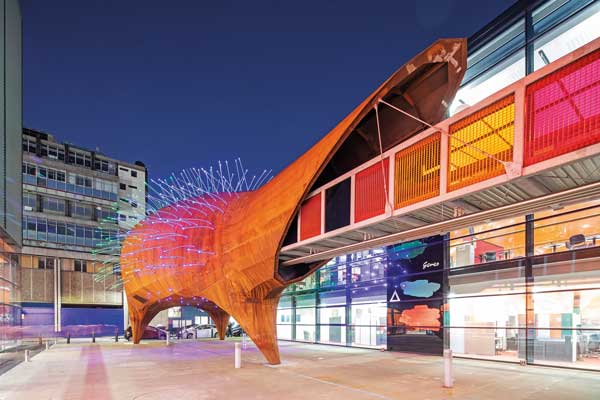 Linked by a bridge to an existing building at Queen Mary University of London’s Whitechapel campus, an unusual steel-framed structure provides a multi-functional space for live science shows, workshops, films and exhibitions.

Known as the Neuron Pod, this steel-framed structure was designed for the client as a multi-functional space for events and as an educational zone. Accessed via a bridge from an existing building on the University campus, this standalone structure has also been described as an art installation.

Created from weathering steel, the Pod consists of an external structural skin stiffened by internal steel ribs. These internal ribs run in both directions to provide stiffness and rigidity to the structural skin. Inspired by a zeppelin shape, both in plan and elevations, it is supported by three legs. 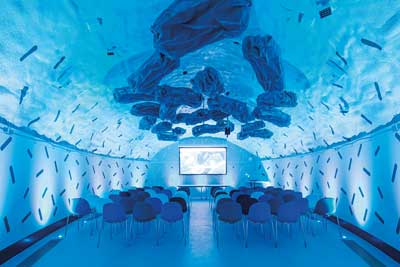 The overall shape presents a curved surface, resembling the central part of a neuron, while the dendrites are shaped in the form of numerous spikes scattered along the external surface of the Pod.

Constructed using a process similar to the construction of a ship’s hull, the structure has been designed and engineered by AKT II as an 8mm developable external plate, welded on an internal series of vertical and longitudinal steel ribs.

“This system was optimised in the design to minimise plate thickness and maximise the spacing of the internal ribs, which reduced the fabrication time,” said Queen Mary University of London Head of Operations Akmol Hussain.

The Pod has been created with weathering steel members, as its natural patina negates the requirement for additional paint coatings.

According to project engineer AKT II, the materials used provide a lasting durability to the structure, while retaining the aesthetic quality the architect envisioned. The structure makes effective use of land and is designed to bear load onto the structure of the basement below – thereby not requiring any additional substructure materials, which minimised the impact.

The project was designed, analysed and produced using a bespoke workflow to produce a full set of construction drawings designed to achieve high levels of precision in the final fabricated form.

The judges say, this latest addition to the Queen Mary University of London Cell Education Centre, surprises in its animal form, is fun and colourful. These qualities meet the brief of inspiring and hopefully attracting future scientists.
This contemporary work of craftsmanship in weathering steel succeeds in striking a whimsical note with serious scientific educational intent.