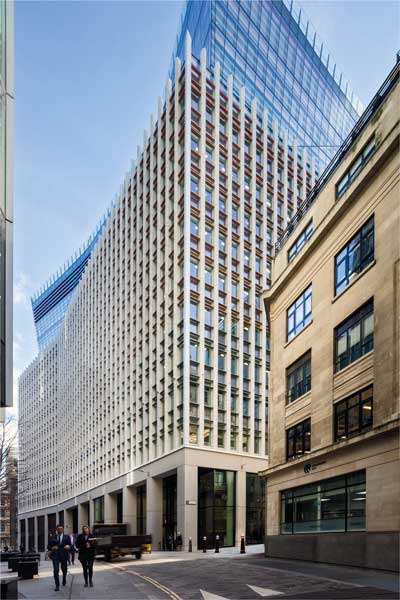 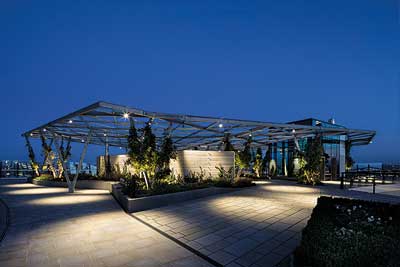 Offering 39,000m² of floorspace, the 15-storey-high Fen Court is one of the latest additions to the City of London’s skyline.

Featuring a distinctive crown-shaped design, the building includes spacious office floorplates, a rooftop restaurant and what is said to be London’s first publicly accessible roof garden.

With its modern steel and glass design, combined with the natural green space of the rooftop garden, the structure provides a welcome contrast to the surrounding City environment.

The upper office floors have a double-skin passive façade, with dichroic glass in the outer panes, giving this section of the building a changeable appearance. The high-performance façade also includes motorized blinds, giving occupants the option to easily reduce solar gain during summer.

The project’s basement was designed to keep an existing high street bank, which occupies part of the site, in operation, while demolition and construction works took place.

In order for this existing tenant to remain operational, the previous building was demolished around the existing bank, and the bank’s new premises then had to be constructed in advance of the main Fen Court structure.

William Hare says it was able to build the new bank premises and facilitate the move, without disrupting services to the public.

The challenging build of the high street bank premises involved a top-down construction sequence for a small portion of the site, in which plunge columns were driven into the ground and a small area of the basement slab was cast.

This allowed William Hare to construct the steel frame above at the same time as the excavation of the three-level basement was taking place below.

Once excavation was complete, and the two cores constructed, William Hare began a traditional bottom-up erection process of the main steel frame. The column grids are between 6m and 9m up to level 1, where the structure then changes to a 3m grid pattern.

This means that floor 1 is a transfer level, formed with a metre-deep plate girder acting as a continuous ring beam.
William Hare said that in order to achieve the tight programme of 23 weeks for the erection of 6,300t of steelwork, it installed a series of welded frames around the perimeter, comprising two × two-storey-high columns, and a couple of perimeter floor beams.

Effectively, this turned the need for four individual crane lifts, into only one, thereby saving precious time.

In summary, the judges say a challenging construction sequence was required to accommodate the relocation of a high street bank that was operational on site throughout the works.