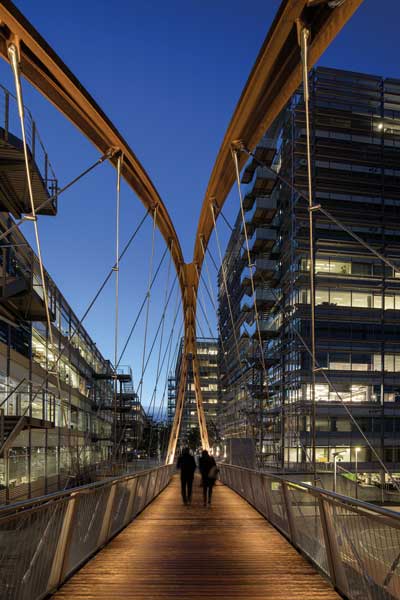 A three-span arched footbridge provides a key pedestrian link between a west London business park and a local underground station.

Numerous challenges were overcome during the design stage for the Chiswick Park Footbridge; a new three-span arched structure that connects a business park with Chiswick Park Underground Station.

The team had to incorporate a dominant 45m-long span over Network Rail Overground lines with the necessary design constraints and approvals; allow for a restricted landing site at one end of the bridge that includes a 4.5m drop in level; and include a minimum road height clearance for double decker busses in the central span.

Added to the above, the bridge had to curve along its entire length and be built in a complex urban environment, hemmed in by train lines, roads and residences, as well as the adjacent Gunnersbury Triangle Nature Reserve.

According to Expedition Engineering Project Manager George Oates, the use of steel was instrumental in the successful delivery of this bridge, as construction of the scheme in an alternate material would simply not have been possible.

The curved nature of the deck and arches required parametric modelling to create geometry and analysis models, in turn creating the geometric definition of every single steel plate in a format that was passed directly to steelwork contractor Severfield for the basis of its fabrication model.

A lightweight solution was also needed to ensure that the 45m-long Network Rail span could be lifted into place from nearby Chiswick Park. The span was fully fitted out and incorporated a steel deck, which was considered to be lighter than a concrete alternative.

The arch was designed as a network arch (close-centred crossed cables), as this is said to produce a highly efficient structure, one that acts as a stiff mesh to control pedestrian dynamic effects and enables the bridge to be slender. This is said to be only the second network arch footbridge constructed in Europe.

“The construction of network arch bridges can be a complex undertaking due to the numerous cables involved. At Chiswick Park the stressing of the cables was achieved via a self-stressing sequence using the self-weight of the bridge, rather than a more conventional multi-pass stressing procedure using tensioning jacks. This saved considerable time and effort,” says Mr Oates.

The bridge is designed and built around whole life costing. This lead to all materials being chosen for maximum lifespan and minimum maintenance requirements.

“Steel provided the necessary strength, while also satisfying the architect’s vision for a slender footbridge that blends perfectly into the business park environment.”

In summary, the judges say brilliantly conceived, beautifully made and ingeniously erected, this project provides not only a much-needed physical link for the community, but also a remarkable local landmark.