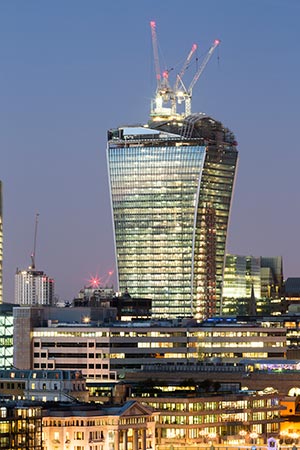 Featuring a unique and iconic shape, the construction of 20 Fenchurch Street required the project team to come up with a number of innovations.

Each floor has a unique size and the final office level 34 achieves an impressive increase in floor space of 50%. The topmost floors of the structure are occupied by a fully enclosed sky garden that will include catering facilities as well as 360-degree views over the capital.

An extensive modelling procedure needed to be undertaken with the project’s architect Rafael Viñoly and structural engineer CH2M HILL developing a master geometry 3D model, which made it possible to develop the final configuration and setting out of the exterior wall as well as the final column positions and framing solution.

Canary Wharf Contractors took the modelling a stage further and enhanced it into a 4D version, with the added dimension being time.

“Adding the time dimension meant we were able to work out and predict the entire construction sequence, so much so that during the tender stages we already knew what the steel programme would entail,” says Charlie Paul, Canary Wharf Contractors Associate Director.

“The choice of steelwork as the framing material was made for a number of reasons, not least for its speed of erection. We completed the entire steel package in just 36 weeks. Using any other material for this architecturally shaped building would not have been this quick,” says Adam Mosey, William Hare Project Manager.”

The main design challenge was how to structurally balance a building with such an unusual shape, while accommodating the unique floor plates without increasing the structural depth.

The solution was to move the core from its original locaton in the middle of the floor plates to a position that corresponded to the centre of the overall mass.

A structural engineering trick was needed to accommodate the geometry of the changing floor plates. “The building’s internal spans change from 11m up to 21m, but the constant structural depth only works up to an 18m span,” says Paul Walters, Engineer for CH2M HILL.

The solution was to incline the columns up to level 22 outwards to match the façade. Above this level, columns on the north and south elevation are not aligned with the façade.

“We then have a 3m cantilevering effect combined with an 18m internal span, which on the topmost office level gives us the desired 21m span,” adds Mr Walters. “Steel was instrumental in unlocking this ability to frame a growing span without increasing the depth of the floor.

The flared shape of this iconic building, in its tight City environment, results in geometric changes at each floor.  This presented huge challenges to the design and construction team.  By using advanced 4D BIM modelling, the on site construction problems were minimised.

“The steelwork contractor impressed the judges by meeting the challenges of detailing, fabricating and erecting the multiplicity of different floor beams and columns, all culminating in an erection time of just 36 weeks.