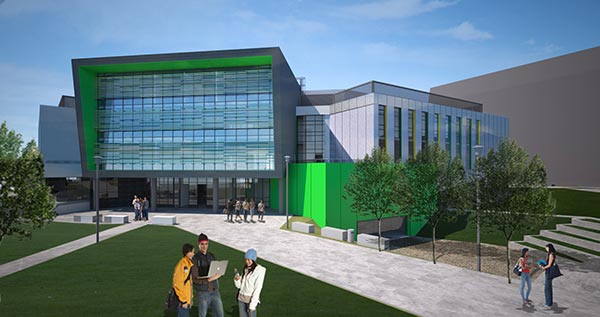 As one of the town’s initial regeneration phases, a new college campus is set to help reinvigorate Grays town centre.

Relocating businesses and shops out of town and into purpose built accommodation has become something of a trend throughout the UK in recent times.

New premises do have many advantages, but so do buildings in town centres. In some instances things seem to have now come full circle as there is now a growing movement to reverse this trend and bring vibrancy and life back into many of our forgotten and underused town centres. It is gathering pace and a good example is taking place in Grays, Essex.

One of South Essex College’s three campuses is currently located on the outskirts of this Thames side town, but from September a new facility will open right in the middle of Grays.

Known as the new Thurrock Campus of South Essex College, the facilities being built by Skanska are a key element of the local council’s plans to re-invigorate the town centre. The new campus will also enable the college to decamp into bespoke buildings and leave behind tired 1960s premises. 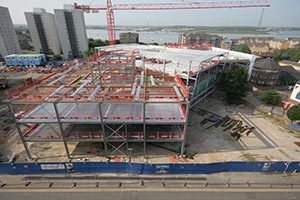 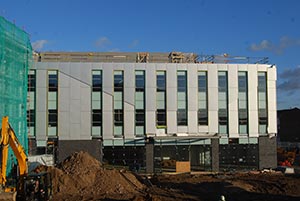 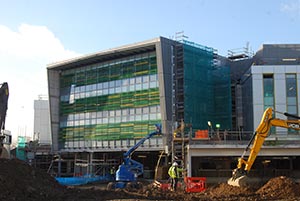 Graham Farrant, Chief Executive of Thurrock Council says of the scheme: “The new college buildings will enable Grays to recapture the hustle and bustle of previous years and become a town that will attract exciting businesses and stores.”

It is apt that the council offices are directly opposite the project, allowing it to literally oversee this town-changing development.

Located on a plot previously occupied by housing and a car park, the new college campus will be well served by local transport, as it is less than 150m from the train station, something which will be a real boon for students who may have to travel from other parts of Essex.

Skanska started on-site in January 2013 and had to undertake some demolition work – many of the buildings had already been cleared under a previous contract – prior to starting with groundworks and the installation of CFA piles.

The development comprises of two buildings: the West Building and the East Building. The former is a four-storey structure and will contain the main entrance, restaurants, a performance area, staff rooms, a library and classrooms for subjects such as hair and beauty, and catering.

The latter is a three-storey building containing workshops and studio spaces linked to applied science, technology, media and creative arts courses. There will also be facilities for art, design, logistics, engineering and IT.

Both structures are formed from steel frames that derive their primary stability from braced cores and cross bracing located in exterior walls.

“We’ve used a composite method of construction with the steelwork supporting steel decking and insitu flooring,” says Steve Arthrell, Skanska Project Director. “Speed of construction was an important consideration and one of the reasons why we changed the design from the original plan that envisaged using a precast flooring system.”

“Plus the site is tight and we wanted to manufacture as much of the project off-site as possible. With steelwork, it comes to site and can be erected immediately without the need for any storage space.”

Steelwork contractor William Haley Engineering started its erection programme with the smaller East Building. With a single core in the middle, the structure has two wings, both three storeys high.

“There were more groundworks to complete on the West Building as it has a basement level,” explains Mr Arthrell. “Once the East Building was completed, the ground was ready for the West structure to be erected.”

Creating the desired and varied classroom sizes, the East Building is based around two distinct column grid patterns (7.5m and 8.5m). Room sizes change on a regular basis depending on their future use, and this meant a slightly longer steel erection process as there were more sections to install.

Steelwork’s flexibility is evident on the top floor where one workshop has been equipped with movable sliding partitions, allowing it to be subdivided into three separate rooms if required, something which would have been difficult with a concrete frame.

The larger West Building is the campus’ main building, fronting the High Street. Structurally it is divided into three sectors; a central portion that is four-storeys high, containing the main entrance and featuring a triple height central atrium. Either side of this are two, slightly skewed in position, three-storey teaching wings, each containing one core.

“Because of the different angles of this structure and the varying room sizes the steelwork for this building is based around three grid patterns,” says Mr Bansal.

“Consequently there are a number of transfer structures to support the frame.”

The largest of these is an 11m long 1m deep beam that supports two-storeys of the building while creating a large open column free space on the ground floor.

This area will be the college’s Multi Use Space, a performance room with terrace seating that will also have sliding doors allowing the space to combine – weather permitting – with an adjacent outdoor amphitheatre.

Steelwork was completed last year and the project is now racing towards its July completion date. Everything is on schedule and utilising a BIM programme during the design phase has been hugely beneficial.

“Although William Haley use Tekla design software for its steelwork model and we use Revit, they are both interchangeable and compatible and meant we were able to combine and export our models, which speeded up the process by highlighting any potential problems early on.” says Mr Bansal.

The Thurrock Campus of South Essex College will be open for the coming autumn term, which is good news for Grays and its ongoing rejuvenation.