City towers rising up with steel 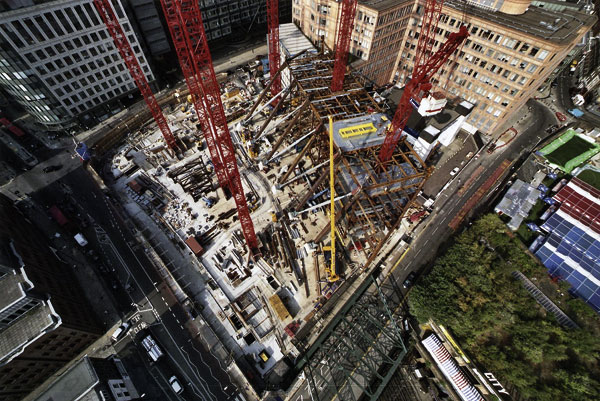 The 35-storey Broadgate Tower and the adjacent 12-storey Bishopsgate Tower are beginning to rise up on the City of London’s skyline.

The £292M steel-framed office blocks will increase the Broadgate estate, which houses financial giants such as Lehman Brothers and UBS, by 20% when completed in 2008.

Construction of the project has been complicated by the fact that four railway lines coming out of Liverpool Street Station need to be spanned. In order to achieve this, main contractor Bovis Lend Lease in conjunction with steelwork contractor William Hare, have built a steel ‘raft’ that covers the majority of the site.

The ‘raft’ structure was erected from six, five-storey high A-frame structures and is a twin-deck steel and concrete sandwich whose upper deck has been designed to support building loads, while the lower deck acts as a crash deck to protect the railway lines.

The higher Broadgate tower will straddle the ‘raft’, while the Bishopsgate building will sit squarely on the structure. The ‘raft’ will eventually form part of the gallery which will connect the two buildings at lower levels.