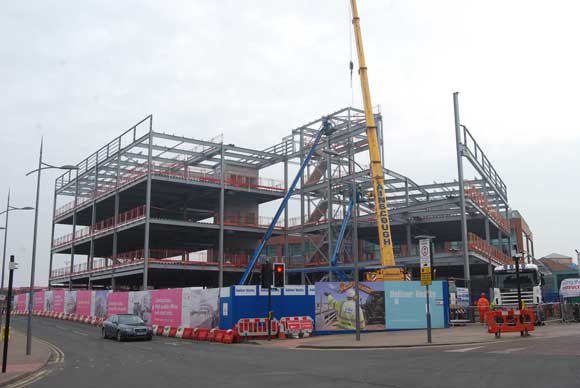 The development will contain Wolverhampton’s first ever Grade A offices

Work to transform an area of Wolverhampton city centre into an international quality transport gateway has begun with steel construction playing a leading role.

Known as the Interchange, the development will create a new gateway to the city, providing a modern transportation hub for buses and trains, as well as retail and office space.

The first phase saw a new bus station and an adjoining office block completed a few years ago. Phase two has now begun with the construction of a four-storey mixed-use building on the site of the city’s old bus station.

With retail units on the ground floor, the structure’s three upper levels will provide Wolverhampton with its first Grade A offices.

Aiming to achieve a BREEAM ‘Excellent’ rating, the steel-framed structure has been fabricated, supplied and erected by Leach Structural Steelwork working on behalf of main contractor Balfour Beatty. 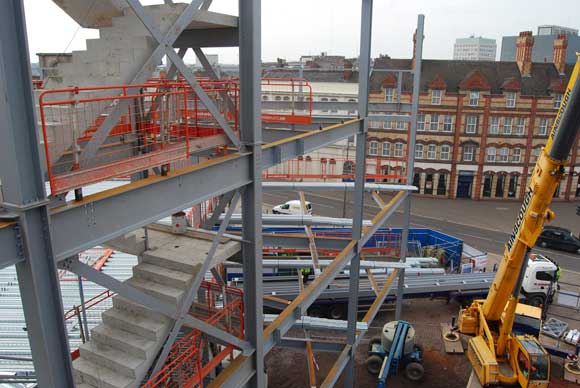 Steel was the best framing choice because of the confined site

Explaining the project’s choice of materials, Curtins’ Director Andy MacFarlane says: “As a team we chose a steel-framed design as it was the best option in terms of programme.”

Steelwork was also the lightest option and this was an important consideration, as some of the project’s foundations have to cantilever over an existing retaining wall that intrudes into the site.

The wall supports a bridge that carries the station approach road (Railway Drive) across the city ring road. Behind the wall there are a number of important service ducts, so moving or disturbing the retaining wall had to be avoided at all costs. A steel frame was consequently chosen at it exerts the least amount of weight on to the foundations.

Supported on piled foundations, the steelwork is based around a regular 7.5m grid pattern that gains its stability from moment frames, bracing and a centrally positioned lift shaft.

Cross bracing is located in stairwells, inside the lift shaft and along one of the building’s gable ends.

Rectangular in plan, the structure features a four-storey element facing the main station thoroughfare, and an interconnected three-storey section at the back overlooking the new bus station.

The entrance to the building is housed within a curved frontage formed with facetted beams and curved channels along the parapet. This was deemed to be the most efficient way of forming the curved elevation, as the glass cladding panels will also have to be installed in a facetted method.

“Bringing materials to site has been very challenging on this site as we are hemmed in on all sides,” explains Balfour Beatty Project Manager Peter Fennell. “This has affected the steel programme and meant Leach has had to use a just-in-time scheme for its steel deliveries as there is little room for material storage onsite.”

The structure occupies nearly the entire footprint of the site and consequently Leach Structural Steelwork had to sequence the erection programme, from one end of the site to the other, so the final bays could be installed by a crane positioned just inside the site entrance.

“Working in this sequential manner worked really well, installing the stairs and lift shaft as the frame progressed,” adds Leach Structural Steelwork Director Eric Leach. “None of the steel sections were heavier than 3t, with the longest elements being the 18m-high columns, so everything was erected by a 60t-capacity mobile crane.” 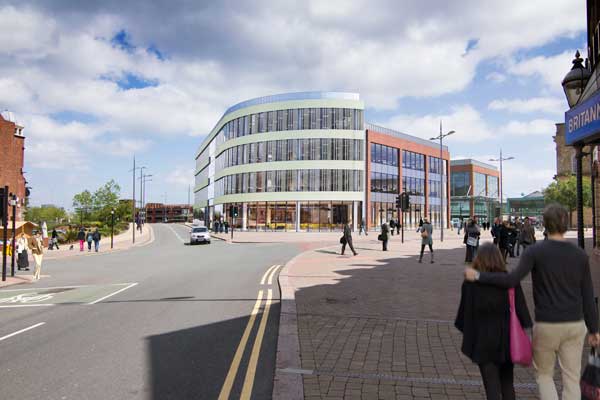 Plans are also afoot to redevelop the entire railway station in 2016, extend the existing Metro line to the new station, and construct further commercial and retail structures.

Neptune Developments Managing Director Steve Parry comments: “The interchange is an important element within the overall scheme and the vision for a modern state-of-the-art transport hub in Wolverhampton city centre.”

Councillor Peter Bilson, Wolverhampton City Council’s Cabinet Member for Economic Regeneration & Prosperity adds: “The Interchange is a main gateway to the city centre and is a strategic regeneration priority for the council. The car park will be the next stage in creating a truly integrated transport hub. The existing multi-storey car park at the railway station is very dated and widely regarded as a bit of an eyesore.”

The scheme has been designed by ASL architects and its lead architect Richard Cronin says: “This is the place where many people arrive in Wolverhampton and we to need create the best possible first impression. We have looked at similar projects elsewhere in the UK and internationally to achieve the highest design standards and create the best possible passenger environment in terms of quality, safety and accessibility. This is very much a piece in a bigger and emerging scheme, but is reflecting the values that underpin the Interchange vision.”