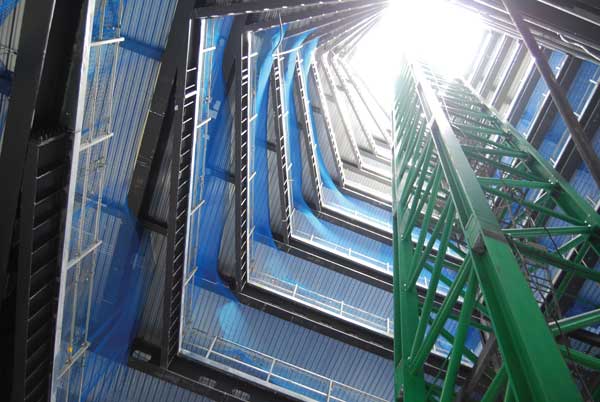 Open-plan floorplates, a spiralling atrium and landscaped terraces are just some of the features of 80 Fenchurch Street, one of the City’s latest commercial schemes.

Construction activity is now pushing the square mile’s traditional high-rise cluster further east towards its Aldgate boundary. One example of this trend is 80 Fenchurch Street, a 15-storey commercial block that will offer 23,200m² of floor space and is aiming to achieve a BREEAM ‘Excellent’ rating.

The scheme had been given consent a few years ago. However, work failed to materialise and a cleared site remained unused until developer YardNine’s involvement commenced in 2018.

Once on-board, YardNine comprehensively redesigned the steel-framed structure’s lower floors and, in particular, its amenities. 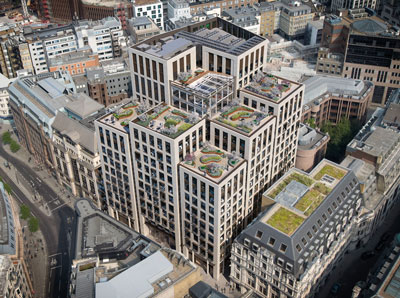 The upper floors will have access to roof terraces 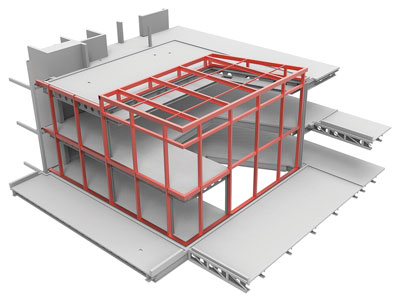 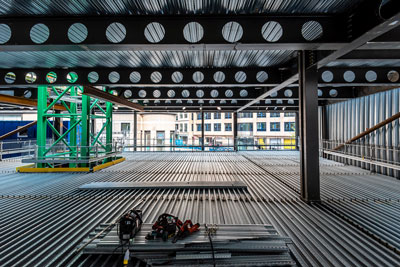 One of the seven internal columns 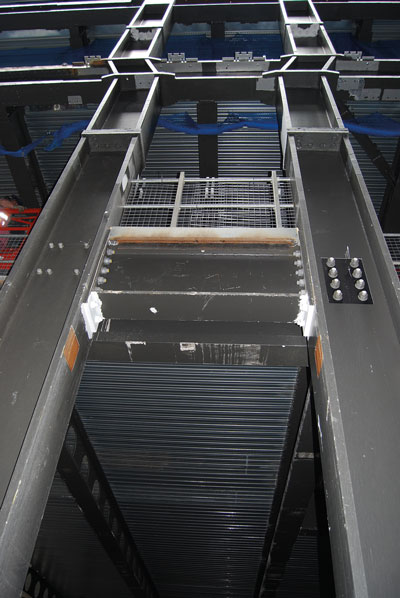 Also, known as EightyFen, the building is said to have been conceived as a refreshing alternative to the more traditional towers of the City. A double-height, and largely column-free, timber-clad entrance foyer will have integrated cafes, restaurant and health facilities, while a centrally-positioned atrium will flood the area with natural light.

“The building will be a benchmark for this part of the City, with floorplates ranging from 460m² up to 1,850m², with the uppermost five floors benefitting from landscaped roof terraces,” explains Skanska Senior Project Manager Rohit Gorasia.

From level 10 to 14, the building’s floorplates decrease in size as each of these levels has a roof terrace. Each outdoor space is in a slightly different position to the others, as they are arranged in a stepped formation that ascends around two sides of structure.

“If you look at the top of the building in plan and divide it into nine squares, five of the outer squares become terraces from level 10 to 14 and the floorplate progressively decreases creating a ‘Giant’s Causeway-like effect’,” says Pell Frischmann Associate Director Kee Leung.

The long span arrangement means there are only seven internal columns, all of which will remain exposed in the final scheme.

“As the columns will be feature elements within the building, we will apply a decorative final coat of paint once the internal fit-out is nearing completion,” says Severfield Senior Project Manager Michael Bryars. “Doing this late in the construction programme, means there is less chance of them getting damaged.”

Aesthetics has played a further role in the design of these seven exposed columns, as 460 grade fabricated plate girder sections have been used, as opposed to conventional 355 grade members, which have been used around the building’s perimeter.

“These columns were chosen as they offer the required stiffness, but are slimmer, meaning they take up less of the valuable office footprint,” says Mr Leung. “They may cost more, but we ended up using less steel, which evens out economically.”

The column splices are also concealed in the structural floor zone, again adding to the overall clean and neat aesthetic look the architect and client desired.

Stability for the frame is predominantly derived from an offset concrete core, which is positioned along the eastern elevation. Similar to the choice of column sizes, the core’s position was chosen so it would not intrude into the floor space, while also giving the impression of a more open-plan environment.

The opposite western elevation has been designed as a sway frame, to restrict torsion and provide some extra stability to the area furthest away from the offset core. This is particularly important as the only area to feature a 15m × 15m grid is in the south west corner of the building.

Commenting on the sway frames, Mr Leung adds that although stability was an important consideration, the main reason for the design was the strict cladding deflection limits along this elevation.

The sway frame is created by two parallel ladder frames that extend up the whole western façade. They are formed by a series of 8m-long × 4m-high H-shaped fully-welded assemblies each weighing 6.5t. They are fabricated from 725mm × 300mm plated beams and 600mm × 400mm plated columns.

Possibly the most impressive feature of 80 Fenchurch Street is the full-height central atrium, which will have a glazed roof.

Standing at ground floor and looking up through the 9m by 9m void, one can observe a spiralling effect as the floor beams along two sides of the atrium are slightly cranked at a different angle on each level to give the impression of a twist.

Forming the roof of the atrium has been one of the more significant design challenges of the project. Taking into account the extra loading that the landscaping of the terraces will impose on the structure – as it will include some large planters with small trees – the atrium roof structure has been designed as an independent Vierendeel frame.

It sits between floors 12 and 14, and this standalone structure supports the glazing and is completely detached vertically from the slab edges at levels 13 and 14, which isolates it from the post-construction movements.

The box is approximately 8.6m tall and works as a Vierendeel frame in two directions, spanning 13m in one direction and 7.5m in the other. It is supported vertically at key discrete points of the main frame.

According to Pell Frischmann Senior Engineer Alexandru Gaftea, the frame was designed so that the deflections are limited during each of the construction stages, starting from the erection of the frame and finishing with the building being fully- occupied and operational.

“By closely coordinating with the architects and the façade subcontractor, we managed to achieve the best balance between the sizes of the steel frame elements and the predicted movements that would have an impact on the glazing panels.”

Due to the large size of this frame and the transportation limitations, hidden splices were introduced at specific locations in order to minimise the visual impact of the exposed steelwork.