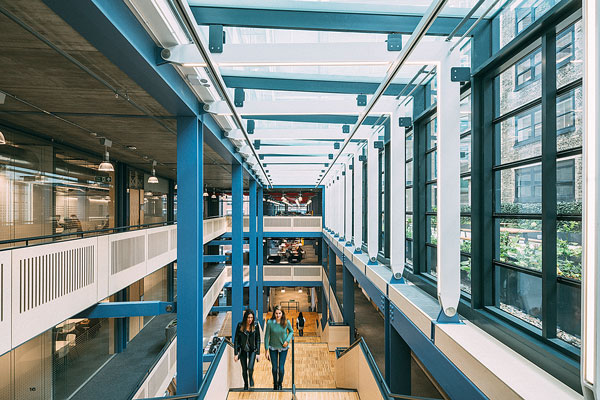 Exposed external bracing, with expressed connection details, bookend the frames of the largest and highest building on the LSE’s campus.

The original brief called for world-class architecture to match the LSE’s international academic reputation. The design went further by creating a new public square, which has become a new focal point for the school. Expression of the superstructure both internally and externally is central to the architectural identity of the building within this new public setting. 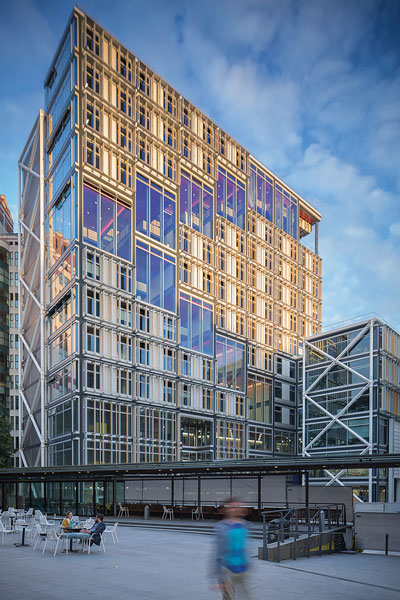 At either end of each block, exposed SHS bracings bookend the project and form a highly visible steelwork element. This exoskeleton bracing, which sits approximately 300mm outside of the building envelope, is not just an aesthetic element. It also serves a structural purpose, sharing the stability with two concrete cores.

The project achieved a BREEAM ‘Outstanding’ rating due in part to initiatives that included a 35% reduction in embodied carbon, which was achieved by reducing the amount of concrete and aluminium used in the foundations and façade fins respectively, and by incorporating more recycled and low-carbon materials.

One of the highlights of the scheme is exposed steelwork, both internal and external, which give the building a distinct and contemporary appearance, a design that required several bespoke steelwork elements in order to fulfil the project’s architectural vision.

As exposed steelwork plays such an important role within the design, the fabrication process had to rise to the challenge. Close collaboration between steelwork contractor and the design team ensured that the structural and aesthetic intent was captured and realised in the final structure. For the project, Billington Structures provided over 1,000t of bespoke fire-protected structural steelwork.

This expressed structural steelwork created many challenges. Shear forces and torsional moments applied to the RHS beams, in conjunction with the desire to avoid site welding, led to a bespoke hidden connection design. Many of the steel members have an internal bolted connection, hidden from view and accessed via a pre-formed aperture in each box section beam.

Another part of the architectural intent was to provide a slimmed down floor construction, in order to maximise available space. This was achieved by using RHS or plated floor beams, featuring bottom plates to support the building’s long span precast floor units, which sit within the depth of the beams.

Summing up, the judges say carefully crafted, exposed steel frame building, worked into an extremely constrained university campus site. Close collaboration between the design team and steel fabricator has produced a high-quality appearance to the steelwork with careful attention paid to the connection details and paint finish.