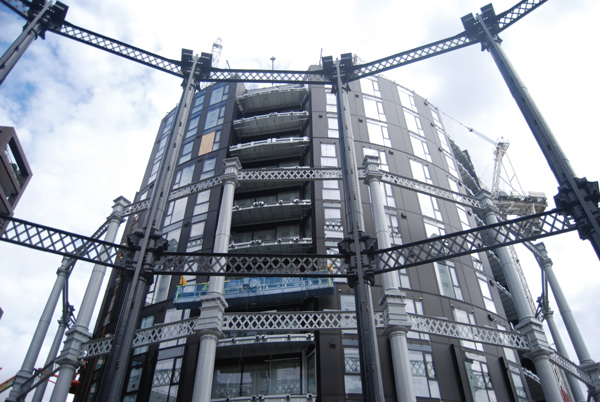 Known as the Triplets, because they are joined and share columns at three points, Gasholders 10, 11 and 12 were originally built in 1860 as part of the Pancras Gasworks that had more than 20 holders in total.

Apart from a few modifications, such as the installation of guidelines in the 1880s to allow telescopic lifting of the central storage unit to improve capacity, the gasholders remained unaltered for most of their lengthy lives.

However as the 20th Century drew to a close, the gasworks was closed down and the Triplets were dismantled in 2001 to make way for the enlargement of St Pancras Station. The columns and the rest of the cast iron framework lay dormant on site for almost ten years before being refurbished and rebuilt on a nearby site as part of a new development. 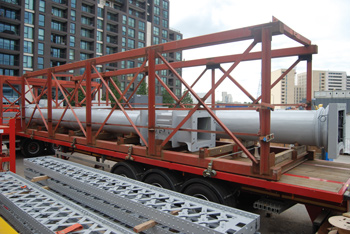 A ‘rocket launcher’ prepares to lift and position a column 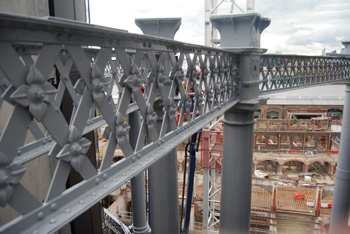 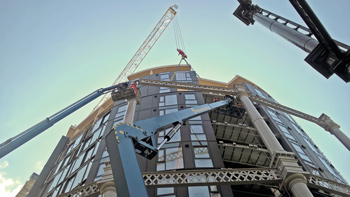 The three gasholder frames were sent to a specialist engineering company in Yorkshire for refurbishment and after a two-year programme they were ready to be delivered back to London for re-erection.

Bourne Steel was employed by the project’s main contractor Carillion to undertake the erection process as it was decided a steelwork contractor would have the specialist knowledge for this job.

“Erecting the frames isn’t a simple job or one to be rushed, the 150-year old cast iron is fragile and needs to be treated with care,” explains Bourne Steel Contracts Manager Colin Hillier-Daines.

“The re-erection was made even more complex as the residential buildings were constructed first and so we had to work around them.”

The iron frames surround the residential blocks but do not touch them at any point as they are self-supporting independent structures.

In total there are 41 columns surrounding the three gasholders – including three shared columns where the frames touch – with each column divided into three sections.

“Considering the age of the ironwork it was all in a fairly good condition, with the exception of corrosion to the connections,” explains Craddy Pitchers Davidson Director Colin Davidson. “Each of the column’s three sections were originally made from smaller individual pieces bolted together. These bolts were corroded so we’ve added steel overbands to cover these connections for added strength.”

Once the columns were delivered to site on flat bed trailers, the erection procedure involved some tricky manoeuvring so as not to damage the fragile ironwork.

The columns had to be carefully moved from a horizontal transport position to the vertical position for installation.

Specialist righting frames had to be developed specifically for this job. They had to be able to manoeuvre the columns without any load or strain being put onto the ironwork.

The columns were carefully lifted from the trailer stillage using a lifting beam to spread the load evenly. They were then set down and secured to the ‘rocket launcher’ for installation and testing.

Prior to the re-erection process each column was tested for integrity having been restored and bearing in mind the ironwork’s age. This was carried out by inducing a three tonne compressive load between the column head and a cruciform lifting frame.

The column section and pivot frame were then lifted into a vertical position as one unit. Once vertical, the rigging was transferred from the pivot frame to the cruciform lifting frame.

A final test procedure involved placing the columns onto a weight table where 1.7t of steel plates were bolted to the base before being suspended for 20 minutes above the ground in order to test the integrity of the base.

Once the tests had been completed and the integrity of the column section had been guaranteed, they were lifted by tower crane into their final positions with the bases fixed using M60 x 1.5m-long holding down bolts.

“No temporary works were necessary as the first column section was stable once it was bolted into place and we were then able to erect each gasholder in a circular manner, one level – bottom, middle and top – in sequence, along with all the connecting beams and bracings,” says Mr Hillier-Daines.

The Triplets had to be re-erected in their original assembly position. Once in position and surveyed to make sure the distance between columns was correct the inter-connecting lattice beams were tied in. 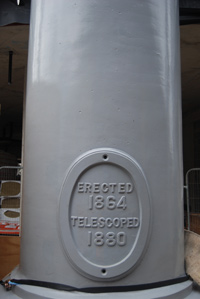 The distance between the columns slightly varies and so each lattice beam is bespoke and had to be installed in the correct location. The three rows of lattice beams are all between six and half metres and eight and a half metres long.

Revealing the extent of Victorian craftsmanship and their desire to give even industrial structures an aesthetic appearance, all of the lattice beams were once decorated with a series of cast iron petals.

Over the years many of these have either fallen off or been removed, although many have been restored and still adorn the beams.

Timber packs were used between the column head and lattice beams as a final adjustment, just as the Victorian engineers had done.

Bourne Steel also had to re-erect a number of original secondary components as part of the programme, these included joint covers, capitols to the column heads and cast iron guide rails, as well as the fabrication and fitting of new steel braces and splice plates.

“Mock-ups of the column heads sat in our office for weeks while we designed and fabricated special tools to fit the connecting bolts and brackets inside the columns,” sums up Bourne Steel Divisional Manager Andy Davies.

“In Victorian times it is likely that small children were sent up inside each column to push the bolts through.”