November 14, 2019 by NSC in Projects and Features, This month's featured stories 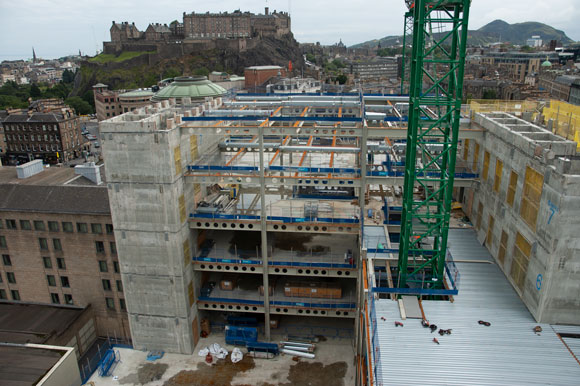 Some of the offices will have views of Edinburgh Castle

The eight-storey steel-framed building will offer 11,380m² of office accommodation, spectacular views across the city from its upper levels and a double-height reception area.

Highlighting the need for Grade A office space in the Scottish capital, the top three levels have already been let to Brodies LLP, said to be Scotland’s largest law firm, while another law firm, Pinsent Masons, has let two floors.

The building sits on top of a three-level reinforced concrete basement that accommodates a 110 space public car park. From the ground floor slab upwards, the structure is entirely steel-framed.

According to BAM Construction Senior Site Manager Derek Cooper, a steel solution for the superstructure was chosen primarily for its speed and ease of construction. The steelwork erection began in May, and by the end of September BHC had completed the majority of the frame, excluding some square hollow section (SHS) ladder frames that will support architectural fins either side of the entrance. These SHS sections will be retrofitted later in the construction programme.

Blyth & Blyth Associate Brett Steyn agrees and adds: “The other key driver for the Capital Square development is the limitation in the overall building height given the location of the site in the centre of Edinburgh. 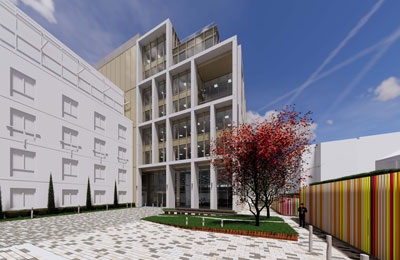 Visualisation of the main entrance 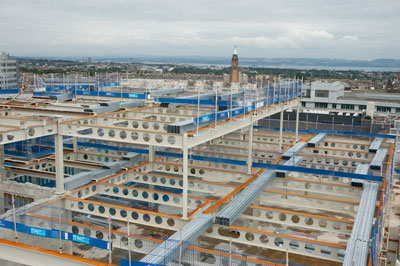 “The height limitation meant that any transfer level or structures would impact on the overall number of usable floorplates that could be achieved. The column grid adopted on site was therefore typically defined to provide a suitable layout for the car parking levels below, while providing clear open office floorplates above. The grid is irregular in both directions in order to accommodate the best parking layout and traffic flow.”

The office floorplates typically have spans of 10.5m for the secondary beams with spans of between 7.5m to 9m for the primary beams.

The structural zone is set at a standard 610mm height and accommodates beams with 400mm cellular openings. The only exception to the cellular beam design is the area of the building that accommodates the exit of the main ducting from the central vertical riser.

This area had to be considered differently due to the size of the ducts. The ventilation ducts were consequently accommodated beneath non-cellular beams, which were installed within the depth of the slab, so as not to interfere with the important floor-to-ceiling heights.

The floorplates remain the same all the way up the building until the upper two levels, which have steps that provide space for outdoor terraces.

There are two terraces, on levels six and seven, while a plant screen extending up from the roof of the structure provides the appearance of a third step.

“Most columns within the walls of the steps are situated on main steelwork lines, and therefore do not require transfer structures,” explains Mr Steyn.

“However, additional steelwork has been provided to tie the columns in all directions and some columns are situated off main steelwork lines. This required transfer beams, which span between secondary beams transferring the loads back into the main frame of the building.”

Lateral stability for the steelwork is provided by two concrete stair and lift cores located on the north and south elevations. These were constructed prior to the steelwork beginning as part of the early concreting programme that also included the construction of the three-storey deep basement car park and the ground floor slab.

Commenting on the construction programme, Mr Cooper says: “This is a very confined site, hemmed in on three sides by existing buildings with only one access route for materials, which is via the busy Morrison Street.

“Steelwork deliveries were kept to a minimum and the loads were erected almost immediately. A concrete frame, on the other hand would have required more deliveries, which would have been problematical.”

Once delivered, all of the steelwork was erected via the site’s two tower cranes, with the heaviest elements weighing 6t, which was easily within the crane’s lifting capacity. The 6t sections are the lowest columns, founded on the ground floor slab.

The site was previously occupied by a 600-space automated car park that used robots to park and retrieve vehicles, allowing cars to be stacked in a way that took up half the space of its competitors.

Once this structure was demolished, one of the first tasks BAM Construction had to undertake was the installation of a contiguous piled wall. This provided the lateral support for an excavation process to deepen the existing basement and for the installation of the core’s foundations.

“Because of the confined nature of the site, all of the concreting works had to be completed before we could begin the steelwork programme for the superstructure,” says Mr Cooper.

This prestigious development is aiming to achieve a BREEAM ‘Excellent’ rating and is scheduled to be complete by May 2020.