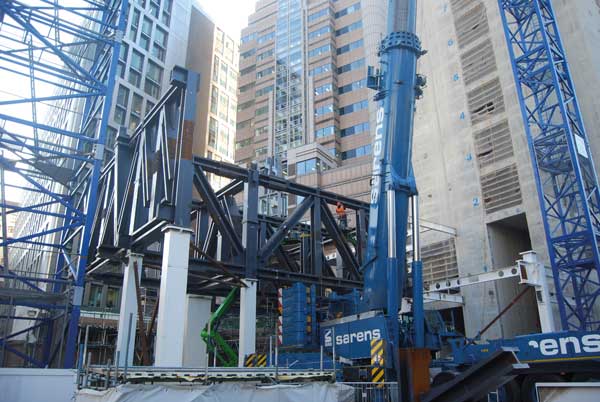 The project covers an area of more than 15,000m², on a plot previously occupied by numerous buildings including the 1960s built 20-storey high St Alphage House.

Work started on site in 2013 with main contractor Brookfield Multiplex demolishing all of the existing buildings, while protecting the historic structures, and then enlarging the site’s existing basement to create a two-level deep zone.

A portion of the high-level pedestrian walkways, known as the Barbican and City Highwalks, originally crossed the site and were removed as part of the demolition programme. These will be reinstated with a series of new weathering steel bridge-like walkways as part of the overall scheme (see box below).

Both buildings, to be called 1 and 2 London Wall Place are steel-framed structures rising to 12 and 16 storeys respectively. Structurally independent they will however be linked by one of the weathering steel walkways that will eventually span the centrally positioned public realm.

The steelwork frame starts at ground floor level atop the concrete ground floor slab. Both buildings comprise a steel frame with composite concrete floors stabilised by concrete cores that incorporate the stairs and lift shafts. 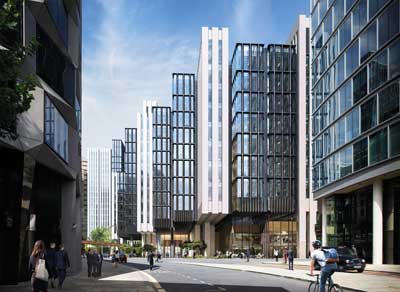 How the multiple cantilevers will look on 1 London Wall Place 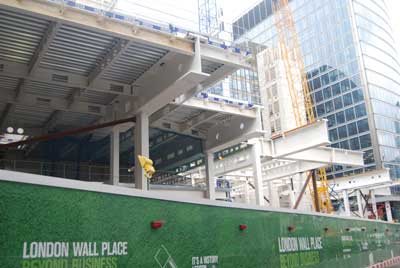 1 London Wall Place’s cantilevers are up to 8m long

“A number of alternate structural systems were considered during the design phase,” says Brookfield Multiplex Project Director Phil Clarke. “But it had to be a steel solution to meet the structural demands of the cantilevers.”

Providing more than 27,000m² of floorspace, the 12-storey 1 London Wall Place is the largest, in terms of volume, of the two structures.

The final shape of the external envelope has been driven by the rights to light afforded to the adjacent Barbican and St Paul’s Cathedral viewing corridor. Consequently the structure sets back at a number of areas to create terraces at the upper levels in order to reflect the planning requirements.

Deep fabricated beams up to 1.95m in depth have been incorporated into the level 2 transfer structure to achieve the longest cantilevers. Other local transfers are also incorporated within the building at every floor to achieve changes in column grid as the envelope sets back floors and terraces.

Overall this structure’s floor framing typically consists of primary beams spanning 9m with secondary beams, spaced at 3m centres, spanning up to 16.5m and in some locations up to 18m.

“The heaviest fabricated beam we have installed is 70t and, like many of these large beams, it had to be lifted into place by a 160t capacity crawler crane we have on site for the early part of the steel programme,” says William Hare Project Director Alex Smale.

Having such a large crawler crane onsite has been a challenge in itself. Because the basement extends below most of the site’s footprint and the slab would not ordinarily be able to support such a large crane, more than 300 temporary props have been used to support the slab while the crane is onsite.

Once the main transfer structure is complete the crawler crane will be removed and the large transfer beams further up the frame will have to be lifted into place by tower crane.

“At this stage all of the heaviest pieces will be brought to site in two or three sections and then bolted together once they are in place. In this way the members will be within the tower crane’s capacity,” adds Mr Smale.

On the adjacent 16-storey 2 London Wall Place, the floor framing, from level two upwards, typically consists of primary beams spanning 7.5m and secondary beams provided at 3.75m centres with spans of up to 13.5m and in some locations up to 15m.

This structure also features cantilevers, which have again been introduced to maximise the floor area, although on this building the cantilevers are approximately 11m beyond the nearest internal column.

Along the south east corner of 2 London Wall Place the building cantilevers out over the main thoroughfare of London Wall, creating one of the project’s main features and something of a structural steel highlight.

A series of single-storey high trusses have been installed to form these long cantilevers and to help limit the potential for high deflections.

The chord members of the trusses are 640mm deep fabricated sections that form part of the main floor framing. The diagonal bracing elements are universal column sections enhanced with plates welded across the flanges to provide the necessary strength and stiffness.

Supporting 15 floors of the building, the truss members and their supporting columns are heavy and large requiring each truss to be brought to site in two or three sections so they are transportable by trailer. Once onsite they were bolted together and then lifted into place by a 500t capacity mobile crane, again sited on the ground floor slab and supported by extensive back propping through the deep basement.

The trusses rely on the main core walls and the tying action of the concrete floor slabs to assist in limiting deflection.

London Wall Place is due to complete in 2017. 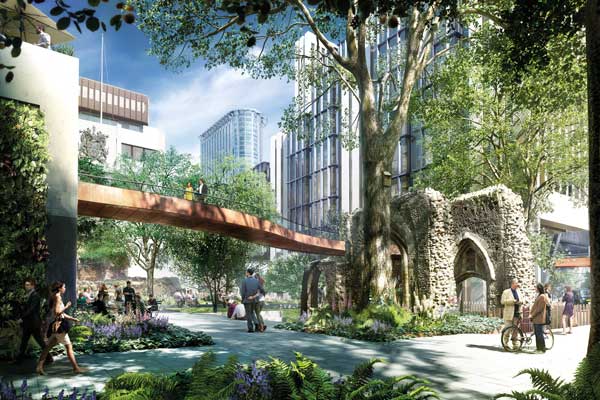 A unique feature of the London Wall Place project will be the reinstated walkway structures, or Highwalks, that will cross the site to re-establish links to other parts of the City’s high-level walkways.

Three of the structures are reinstated bridges, one crossing London Wall and the other two spanning Fore Street, while a fourth will create a new high-level pedestrian bridge across Wood Street. The other structures crisscross the site below and around the new buildings linking all of the bridges together.

Crossing London Wall, Walkway 1 is the longest structure and it will be lifted into place, as one piece, during the coming Easter weekend. It is a steel footbridge that will re-instate the north-south connection to the nearby Bassishaw highwalk.

The 1 London Wall Place building frame will support the bridge as it cantilevers more than 30m out over the London Wall carriageway. A 20m high stainless steel pylon with a series of suspension stays will be used to support the far side of the new bridge and transfer the loads back into the building foundations and the structure at level 4.