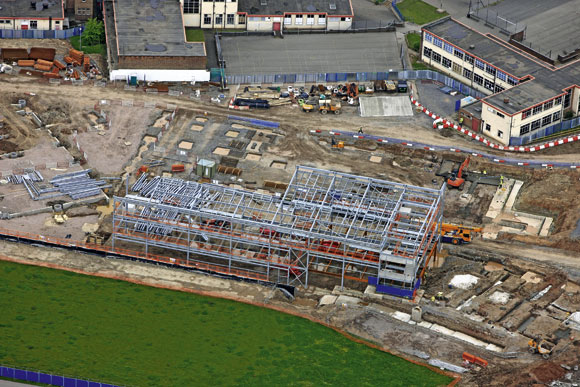 Steel’s cost effective and programme benefits have come to the fore on three new schools under construction in Nottingham.

Nottingham City Council is working in partnership with inspiredspaces to develop and build a new Academy in Bilborough called Nottingham University Samworth Academy (NUSA) which will cater for 950 pupils aged between 11 and 18. inspiredspaces is a joint venture company set up by Carillion and its partners to deliver educational transformation through the Government’s Building Schools for the Future (BSF) programme.

The decision to use steel for the framing material for this project was predominantly contractor led as main contractor Carillion wanted the main frame erected as quickly as possible to fit into the overall tight construction programme.

To this end NUSA is a steel framed two and three storey complex divided into five distinctive blocks which are all interlinked. These have been designated as a main teaching block, science block, lecture/drama block, dining block and sports hall.

Chris Pembridge, Regional Director for Atkins, says: “Although the individual blocks are linked, structurally the project was isolated where possible with three major moment joints.”

Steelwork contractor Caunton Engineering completed the majority of the steelwork for this project from April to August last year. Adrian Downing, Caunton Contracts Manager, says: “We erected the three level teaching block first as this is the largest block and it allowed follow-on trades to get started on the most time-consuming part of the project.”

The teaching block is based around an irregular grid pattern which accommodates different classroom sizes. “This was another reason why steel was used for this and with many school projects,” adds Mr Pembridge. “Steel framed teaching blocks lend themselves to reconfiguration if needed in the future.”

Stability for this block, and in fact for all of the project, is derived from bracing located in stair cores and in bays where there are no windows. Precast concrete lift shafts and stairs were also installed by Caunton.

Once the steelwork for the teaching block was up Caunton worked its way up the sloping site and erected the other blocks which are all two-storey zones, with the exception of the sports hall. The portalised sports hall features the project’s longest spans of 18.5m which were formed with a series of cellular beams, utilised for their inherent economy.

Towards the top of the sloping site the school’s blocks form an internal courtyard which is roofed with ETFE. Two steel bridges span this internal space, both formed with 12m long beams supported on universal columns. 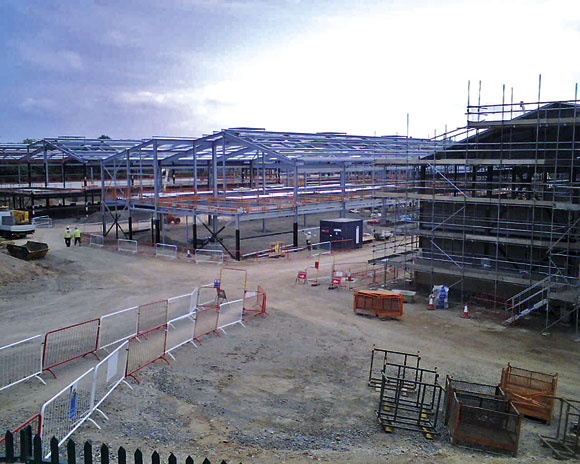 The Bulwell Academy, another entirely framed in steel school project, is divided into eight blocks which form an E-shape in plan. The project comprises a 13m × 23m main hall, a 35m × 18m sports hall, a library, a dining area, with the remaining blocks consisting of classrooms on two levels, connected at first floor by outside walkways.
Chris Pembridge, Regional Director for Atkins, says the decision to use steel was again contractor driven and based on the need for a quick construction. “Steel framed buildings are erected quickly and efficiently and this is important when the overall programme is tight.” 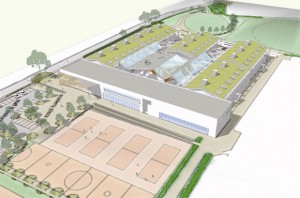 Impression of the completed Bulwell Academy

Atkins designed the project’s steelwork while Caunton designed the connections and erected the steelwork during the Spring of 2009. “All of our steel erection had to be coordinated around other on-site trades,” comments Adrian Downing, Caunton Contracts Manager.

The structures consist of a mix of traditional beam and column, and portal frames for the main hall and sports hall. All of the school’s eight blocks are linked with a number of moment joints isolating individual zones. “Using portalised steel frames also provided us with the desired longer spans for the halls,” comments Mr Pembridge.

Stability is provided by bracing positioned in corridor walls and windowless bays. The majority of the blocks have pitched roofs with the classroom blocks’ roofs covered with sedum to prevent excessive rainwater run-off and adding a green sustainable benefit to the project’s design. Some of the school’s plant areas have also been conveniently secreted into the structure’s pitched roofs. 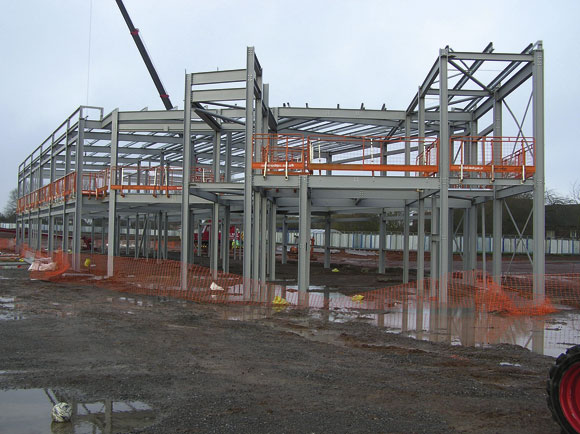 Nottingham Academy will be the country’s largest school

Having successfully completed the steelwork for other academies, Caunton were subsequently awarded the contract to erect structural steelwork for a third project, a unique institution which is set to be the largest school in the UK, with more than 3,500 pupils.

Harry Stock, Associate at Price & Myers, says: “This sector is roughly doughnut-shaped. Because of this shape and the large amount of angles the grid is very irregular and for stability the structure required numerous moment frames as there are a lot of open areas.” 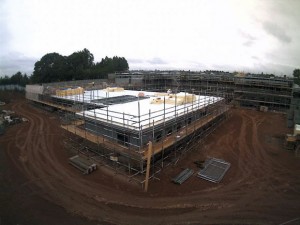 Cross bracing has also been used and predominantly located in corridor walls, while external bracing has been placed in blockwork areas.

Attached to the circular structure is a long rectangular block which curves inwards by 45 degrees halfway along its length. Housing the primary and infant schools, this section is mostly single storey.

The project features a number of sustainable features such as rainwater harvesting, a green roof over some of the single-storey elements, and a biomass boiler.

To find out more about the Nottingham LEP visit www.nottinghambsf.co.uk