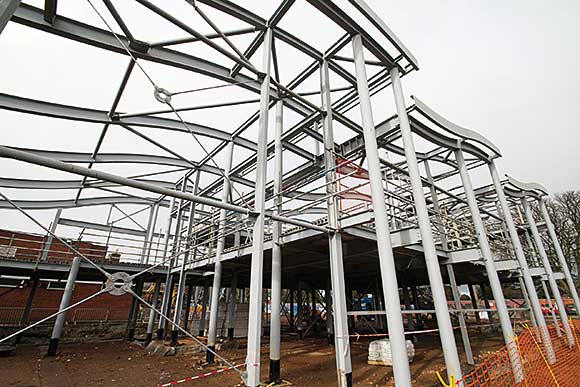 Steel sourced from Corus, which has a large manufacturing plant at Scunthorpe, is making a substantial local impact by being used to construct two new schools in the Lincolnshire town. Martin Cooper reports from the first phase of an ambitious BSF project.

One construction sector which has been left relatively unscathed during the recent credit crunch and downturn is education. A raft of Government and privately financed schemes are either completed or on-going as the nation’s schools and colleges get an overdue make-over.

Many of these rebuilt or new educational establishments rely on steel as their main framing material, as clients, contractors, designers and architects realise the myriad of benefits afforded by steel construction – speed, cost and flexibility being just three.

Corus is the UK’s largest steel producer and when a £91M Building Schools for the Future (BSF) programme for the town was put out to tender, there was a strong desire to use locally produced material.

As it turns out, the consortium which is undertaking the programme, which will eventually involve the construction of one new school and the refurbishment of five others, chose steel framed structures as one of the main elements of its successful bid.

“Steel offers a quicker construction programme and we specified from the outset that all of the material had to be sourced locally by our steelwork subcontractor,” says Gary Reay, May Gurney’s Senior Project Manager for Melior Community College.

Melior is one of two projects currently under way as part of Scunthorpe’s BSF programme, the other being Brumby Engineering College (four more schools are due to start later this year).

The construction of the £18M Melior Community College represents the first new build secondary school in Scunthorpe for more than 50 years and the project is the largest scheme in the programme. Combining two existing schools – Thomas Sumpter and South Leys – the new school will focus on business, enterprise and the arts.

Main contractor May Gurney has been on this site since October 2009, with the initial works on this greenfield site including a cut and fill operation to level the sloping topography.

The project has two phases, with the initial phase consisting of the construction of the 8,500m2 new school building and its associated landscaping. During the summer of 2011, the pupils will decamp into their new premises and May Gurney will begin demolishing the adjacent Thomas Sumpter School to make way for new sports pitches. 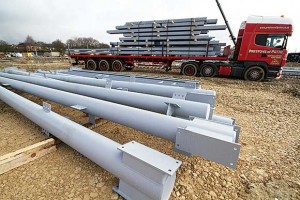 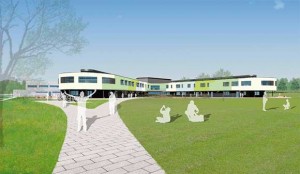 How the completed Melior Community College will look

The majority of the new school is a two-storey braced steel with precast planks design, with Atlas Ward Structures fabricating, supplying and erecting the steelwork – all sourced from Corus – during a 15 week on-site programme.

Steel’s flexibility has also played a key role in the design of Melior, says May Gurney’s Principal Design Engineer Tim Brown. “A number of teaching and vocational areas are sub-divided by folding partitions which can be removed if and when larger areas are required by the school.

“Also, in the middle of the school’s two teaching blocks there are central voids and atriums which have been designed so they can provide future extra floorspace.”

The majority of the school’s soffits are to be exposed to facilitate cooling and natural ventilation, thereby making the structure more economical as fewer air-conditioning units are needed.

“There are a few tricky connections associated with the job and as there are exposed soffits some of our connections will also be left exposed. We had to make sure the fine details on these were perfect,” says Neil Hall Project Manager for Atlas Ward.

Most of the steelwork is based around a 3.6m grid pattern with the exception of the large open column free areas, such as the sports hall, drama hall and the central focal point of the whole school, the forum.

The forum is a triangular area that provides links with all four wings of the school learning spaces. A great deal of thought has gone into how to maximise the potential of the zone at the heart of the school. It will accommodate an assembly area, a dining hall and demountable seating for students to view performances in the adjoining drama hall. The forum features some of the project’s longest spans with 18m long cellular beams to be installed. 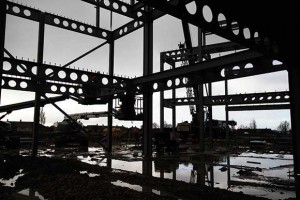 Meanwhile, less than two miles across town work has also started on the £12M Brumby Engineering College. This project involves the partial demolition of the existing school, the construction of replacement structures and the refurbishment of the remaining old school buildings.

As the new buildings on this project are being built on areas previously occupied by old school structures, a phased programme is in operation which allows Brumby College to operate normally. Some temporary classrooms were installed by May Gurney at the beginning of works programme last year.

Structural engineer for the job, May Gurney, says steel was again the best solution for this project because of the need for a speedy construction programme.

The new buildings on this project include a new stand-alone steel framed sports hall which was erected towards the end of last year, and a large L-shaped main building which is a two-storey steel braced structure. The north south elevation of this building is curved in plan, adding some complex geometry to the job.

The main L-shaped structure’s most eye-catching element is the wave-form roof which extends along the main part of the building and is supported on a series of CHS columns. This steel structure is formed with curved UKC’s, bent by Barnshaw Section Benders, and then fabricated and erected by Atlas Ward.

This block contains a dining hall, a drama room, a plant room, a science block and a technology block. 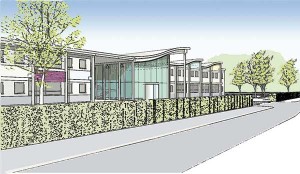 “The design of this project is similar to Melior with exposed soffits and steelwork connections, with bracing predominantly located in partition walls or along exterior areas with no windows,” says Mr Hall.

One of the largest steelwork sections on the job is a large 28.8m long x 2.5m deep truss which is located along one elevation in the dining hall. This is the area where the wave-form roof adjoins a more traditional flat roof on the east west part of the L-shape. The truss is positioned at roof level and allows one dining hall elevation with large windows to be column free.

Both Melior Community College and the new buildings at Brumby Engineering College are scheduled to be in use by mid-2011.

Work on schedule despite bad weather 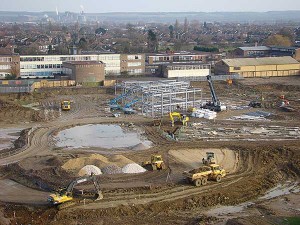 In order to start the steel frame erection on Melior Community College on time, Gary Reay, Senior Project Manager for May Gurney, says his team started work two weeks ahead of schedule despite this winter’s heavy snow.

However, some ingenious measures had to be taken to make sure everything remained on track.

“The problem wasn’t the snow but the sub-zero temperatures,” says Mr Reay. “We had to encapsulate the concrete substructures with temporary tents and introduce heaters to maintain a constant temperature for concrete curing.”

Without these measures to mitigate the harsh weather the follow-on steel erection programme would not have started on time.