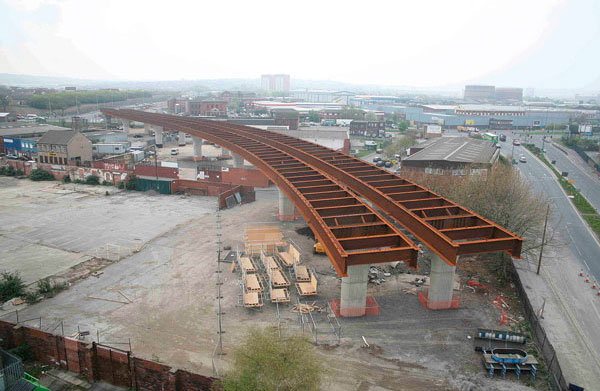 The final £50M stage of the Leeds Inner Ring Road is under way and includes the construction of the dual two-lane 500m-long Hunslet Viaduct.

Known locally as ‘the missing link’ the Viaduct will connect the existing Ring Road with Junction 4 of the M621. Supported on concrete piers, the 12-span structure is being constructed with more than 2,000t of weathering steel.

The bridge features a distinctive S-shaped curve along its route over the previously industrial landscape of Hunslet.

The area was once the workshop of Leeds and for more than a century heavy engineering, including steel foundries, thrived in the area.

“The decision to use weathering steel was supported by the Council’s planning department who liked the idea of reflecting the industrial heritage of Hunslet and the use of steel that looks like steel,” said Derek Parody, Project Director for project designers Mouchel Parkman.

Steelwork contractor Fairfield-Mabey started erecting on site at the end of 2006 and is scheduled to complete its work – which also includes two smaller road bridges over the Leeds to Derby railway – by late August this year.

Fairfield’s Project Manager, Ashley Cooper, said: “We initially erected one of the central spans as this was the optimum place to begin because of the fixed bearing. We’ve since completed the middle spans of the Viaduct leaving the two ends and abutments for completion this Summer.”