The combined bridge and walkway was considered to be the most aesthetically pleasing design.

An eye-catching steel walkway and bridge has recently been erected at Dublin Airport as part of the on-going expansion project. Martin Cooper reports. 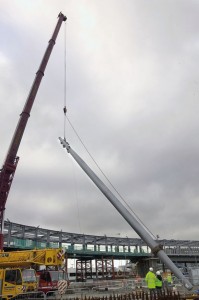 Temporary supports were not dismantled until the bridge’s two masts and cable stays were installed.

Dublin’s international airport is currently in the midst of a large-scale transformation which includes the construction of the new 15,000m² Pier D that will be operational this autumn. It will provide significant extra space with 12 new boarding gates capable of handling 10 million passengers per year.

The steel-framed stand-alone pier is linked into the existing terminal by a new 350m-long combined suspension bridge and elevated walkway that curves around Dublin Airport’s old terminal building. This historic building now houses the Dublin Airport Authority head office and a number of aircraft boarding gates.

The two-way elevated pedestrian link is 12m wide and will contain 8 travelators, four for each direction.

Constructing such a long structure at a busy airport presented the team with a number of unique challenges. Colin Potts, Project Leader for main contractor Laing O’Rourke, comments: “The link is both landside and airside and there is a high security fence that had to be negotiated, meaning the link is two completely separate sites.”

“All materials delivered to site, as well as all construction activity associated with the project had to be approved by the airport security and fire service.”

Laing O’Rourke is the main contractor for the entire Pier D project which includes the elevated passenger link. It has employed two different steelwork contractors for the scheme; Watson Steel erected Pier D’s steel frame, and locally based SIAC Butlers Steel is doing the link.

The majority of Pier D’s frame had already been completed by the time SIAC Butlers started its on- site steel erection work last November.

Pat Egan, SIAC Butlers Contracts Director, says even though the link’s steel frame wasn’t erected until November, the design and detailing work got under way in July. Working with PM Group, SIAC had two designs worked out for the airport link.

Pat Lonergan, Project Manager for PM Group, says the present design was chosen because it was more acceptable to the planning authority, and it afforded unimpeded views of the old terminal building. “This design was also considered to be more aesthetically pleasing.”

The bridge affords unimpeded access to the old terminal building.

Once the plan had been decided on steelwork fabrication was immediately started at SIAC’s Portarlington facility, which is approximately 40 miles from the site. “Steel was the only way to go,” adds Mr Lonergan. “Once an 85m-long clear span was decided on it could only be achieved with structural steel.”

The work was divided into two main areas, the walkway construction and the bridge works, which both ran in tandem. Building the northern walkway, which connects into Pier D was then divided into two further work teams, as this section of the link crosses into the airside security zone.

“The dividing line between airside and landside was fairly fluid, but required detailed planning, communication and police attendance,” says Mr Egan. “Once the walkway sections were being lifted into place we were permitted to move a barrier back and forth to allow the job to be done from one side or the other.”

Before SIAC came on site the walkway’s 22 pairs of concrete pillars had already been cast and this allowed steel erection to begin straightaway. Each pillar has a steel butt plate cast into the top which then connects to a steel runner that ties the two pillars together.

According to Mr Egan, the walkway construction was then fairly straightforward and involved using one 150t capacity mobile crane to lift the pre- assembled walkway sections into place.

“We then infilled these main box column and beam sections once they were welded into position,” adds Mr Egan.

The southern walkway is a straight structure connecting the bridge to the existing terminal and has a 2.5m clearance at the terminus end, rising to 7m at the other end. The northern walkway, which is approximately 150m long, has a 45-degree right bend so it can go around an existing airport building.

However, the most challenging part of the project was the centrepiece suspension bridge which connects the two walkways. “This is a very complicated structure as it’s curved in plan and elevation, giving rise to a challenging design, fabrication and erection sequence,” says Mr Egan.

“Although the bridge only accounts for 85m of the link’s overall length, it required 530t of structural steel to construct it, which is about 40% of the total tonnage for about 25% of the overall length,” adds SIAC Butlers Project Manager Harry Johnston. 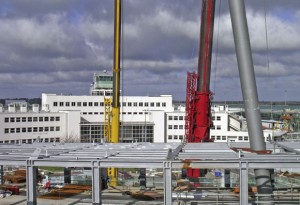 Each mast was lowered through a hole in the bridge and then into its foundation footing.

Erecting the bridge required SIAC to install temporary supports which would keep the bridge in position until its two supporting masts and attached cable stays were in installed.

The positions of the temporary trestles onto pilecaps were pre-determined by Capita Symonds to allow for future maintenance of the bridge end bearings by relieving the cable supports of their loads.

“The bridge was built in five sections, the heaviest weighing approximately 130t. These were assembled on the ground and then lifted into position by a 350t capacity mobile crane,” explains Mr Egan.

Because of the curvature of the suspension bridge 50mm butt welds where required between each of the five sections, while at either end movement joints connect the bridge to the walkway.

Once each bridge section, containing all the main vertical columns and horizontal beams, was on its temporary supports, the infilling steelwork was then erected. Mr Egan estimates that each bridge section took approximately one week to fully construct.

“Erecting the bridge was a tricky procedure but we were confident it would all fit perfectly as we’d already done a trial erection at our facility,” adds Mr Johnston.

Everyone involved in the project agrees that the most logistically challenging part of the steelwork job was the positioning of the two masts, particularly as this was all done in a busy airport environment.

The masts are each 35m long and slightly tapered at one end, giving them a slight cigar appearance. They were imported from the UK and delivered to site as complete items. 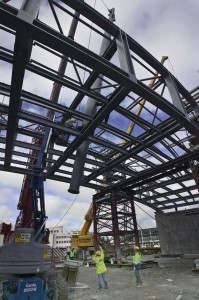 The curved bridge was assembled in five sections.

Lifting each 26t mast into position required a number of temporary cables and supports to be attached to the unit, so it could be lifted off the ground and lowered through a hole in the bridge into its foundation footing.

“What made the whole procedure difficult is the fact that the supporting masts are positioned at an angle and so they had to be lowered into position at that angle,” explains Mr Egan.

After the masts were bolted down the supporting stays were connected, 12 for each mast. Once all of this was complete, the bridge’s entire temporary works was dismantled.

The pedestrian link is scheduled to be handed- over to the Dublin Airport Authority this October.