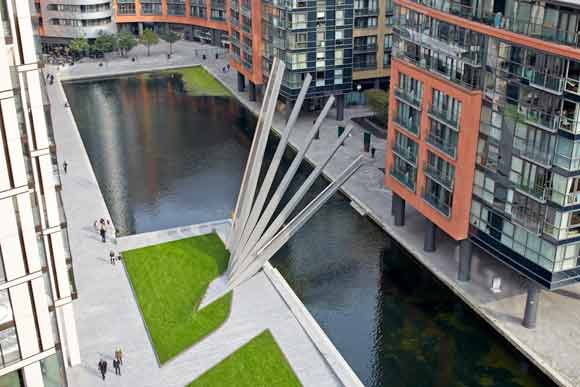 The bridge in its fan-like open position (photo: Edmund Sumner)

Located in west London’s Merchant Square, a mixed-use waterfront site at Paddington basin, a landmark movable footbridge has recently opened to the public.

The structure has instantly become a local icon because when it opens its steel deck beams unfurl individually like a Japanese hand fan, presenting onlookers with a unique event.

Connecting the office buildings that are situated on either side of the Grand Union Canal at Merchant Square, the bridge was designed by Knight Architects working alongside structural engineers AKT II.

The bridge replaces a redundant crossing and the project was a planning requirement.

Inspiration for the fan-like design came from the desire to have an easy to maintain structure, one that was not too challenging to build and which would become a landmark.

The client also wanted a bridge that would reflect the quality of the surrounding offices, as well as improving the connectivity across the basin.

European Land & Property CEO Richard Banks, said: ‘Bridges are a crucial element of the built environment at Merchant Square and, therefore, it was important for the new footbridge crossing the canal to enhance the public realm, not only practically but visually.”

The bridge’s location is near the very end of Paddington Basin with only permanently moored business barges beyond it, so it is not expected that the structure will need to accommodate through marine traffic. 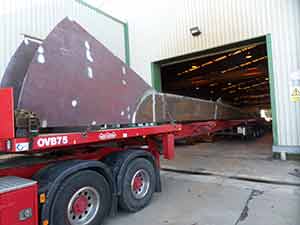 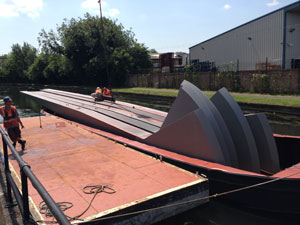 Steel was delivered to site by barge

However, the Canal & River Trust stipulated that bridges in the area should not obstruct any vessel navigation, which is why it is necessary that the bridge can be raised.

Knight Architects Project Architect Bart Halaczek, says: “Our competition-winning design concept is both simple and spectacular. A lifting bridge was the only realistic option for this tight footprint as there is no room for pedestrian ramps.”

Choosing the correct material for the bridge was an important consideration. The design team says it looked at a number of materials and steel was finally chosen, as it is relatively lightweight and easy to fabricate.

Five tapered 600mm wide fabricated steel beams form the deck of the structure. Each beam varies in depth and section depending on its position in the opening sequence – although they all span roughly 17m.

The beams all operate independently and are attached to a feature counterweight. The opening relies on a pivot point with a bearing at the end of each beam that allows them to be lifted in sequence by a hydraulic ram.

One of the bridges’s key architectural features are the counterweights which are formed from rolled plate to form ‘blade’ like elements which slowly rotate with the fingers as the bridge is operated and lie flush with ground level when the bridge is fully open. S H Structures says the finish of these elements was critical to the overall aesthetic of the bridge.

The counterweights assist the bespoke mechanism that includes hydraulic rams, to reduce the energy required to move the structure.

These handrails contain continuous LED down lighting that both illuminates the structure’s walking surface and presents a vibrant display of light.

“Access to the site for deliveries and conventional crane operation was not possible which meant that the fabricated elements had to be loaded onto a barge further up the canal and then towed to site for installation,” explains Mr Burton.

“Lifting operations were restricted to the use of a barge-mounted crane that only had limited capacity, so the installation was challenging but in the end went very well.” 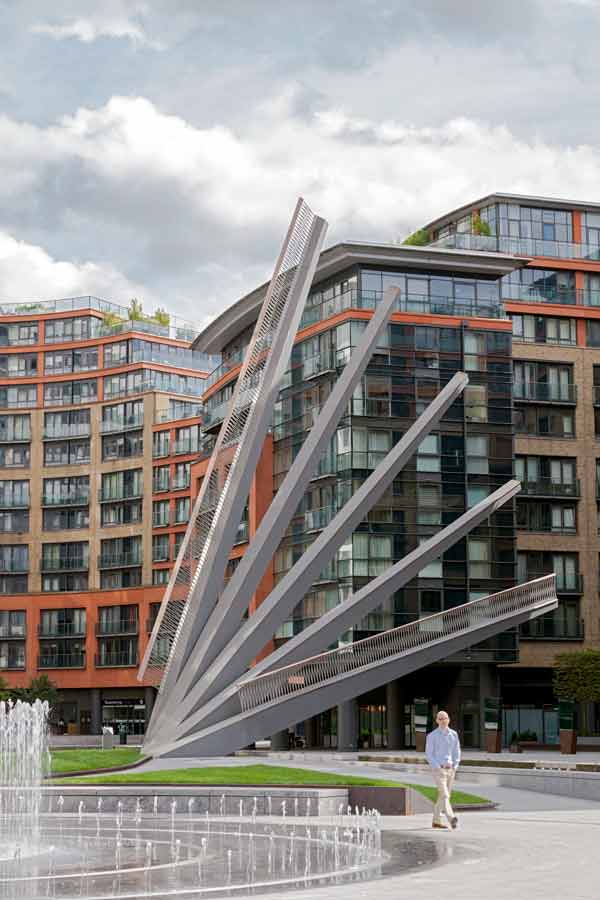 Members of the Merchant Square management team open the bridge every Friday at noon, as well as on special occasions.

“It’s become a local event and people come along to specifically watch the opening and unfurling of the bridge,” says Mr Halaczek

It takes approximately three minutes for the bridge to open and it is operated manually from a control unit positioned on a stainless steel plinth 15m away from the bridge.

Behind the bridge there is a pit for the hydraulic rams, while in an adjacent car park there is a facility for the structure’s pumping gear.