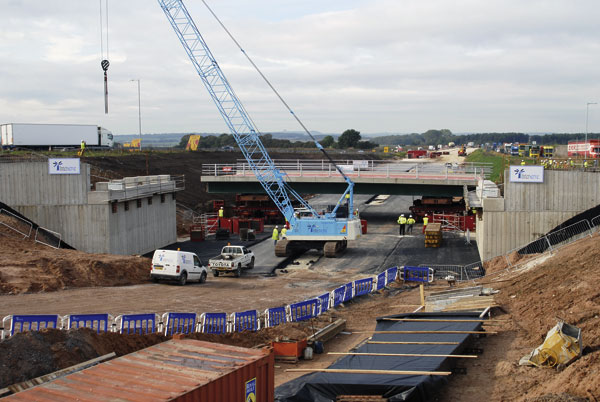 Six junctions on the A1, between Peterborough and Blyth, are being upgraded with new steel bridges replacing busy and congested roundabouts.

According to the Highways Agency this 110km- long section, although of satisfactory standard, suffers from severe localised congestion and the bridges will alleviate this by allowing motorists a clear run.

The most northerly junction of the scheme is the Blyth A1/A614 interchange near Retford. Here, as with all the other five junctions, a new 30m-long bridge is being constructed over the existing A1 with new roundabouts either side.

At this location an innovative and time-saving procedure has been used for bridge construction. While the bridge abutments were being readied, steelwork contractor Fairfield-Mabey, assembled the bridge steelwork on a temporary platform to the side of the new bridge position.

Once the 500t bridge deck was assembled, along with the concrete decking and edge protection, it was transported by self-propelled modular transporters over a distance of 200m and jacked into position.

Main contractor Interserve employed heavy lifting specialist Mammoet to carry out this procedure and said it reduced the construction programme at Blyth by approximately two months.

All six junctions are scheduled to be completed by October 2008.