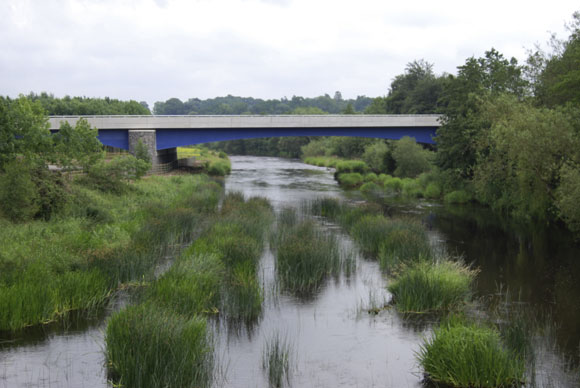 Using steel allowed all work to be undertaken from the riverbanks

When it comes to building bridges two transportation projects in the Republic of Ireland have highlighted steel’s flexibility and ease of construction.

Ireland’s recently opened M3 motorway provides a much needed improvement to one of the country’s busiest commuter routes. By connecting the towns of Kells, Navan and Dunshaughlin to the M50 Dublin ring road, the 66km-long highway has alleviated town centre congestion, while simultaneously making the life of driving commuters less stressful.

Just north of Dunshauglin the M3 crosses the River Boyne, the widest obstacle along the highway’s route and one which required the largest structure.

A steel composite solution was chosen for the bridge (known as S19) as this was deemed the best way of avoiding any work being undertaken in the river.

Steelwork contractor SIAC Butlers Steel fabricated and brought the bridge’s girders to site in fully braced pairs. “This minimised the amount of on-site work needed,” explains Tony Callanan, SIAC Butlers’ Construction Director. “And also meant we could lift fully assembled girders into place across the river from the bank.”

Initially the 56m-long central span was erected with the aid of a 1,000t capacity crane positioned on the riverbank. These girders were too long to be transported by road as complete sections so they were delivered in two parts and then spliced together on site before being lifted into place. Because of their extra length, the central span’s girders are 3.8m deep, while the outer spans are 2.2m deep.

“Once the mid section was in place, the outer spans were then lifted using a 400t capacity mobile crane,” adds Mr Callanan. “As these spans were smaller, we were able to fabricate and deliver the girders to site in complete 37m lengths.” 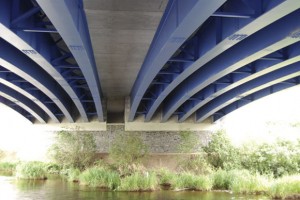 Aesthetics have played a key role in the design of this structure, with landscaped areas placed around the supporting piers and the client specifying a brilliant blue polyurethane paint for the steelwork, which was applied in SIAC Butlers’ fabrication facility.

“Most of the connections on the bridge are bolted, but for aesthetic reasons the outermost girders were site butt welded,” adds Mr Callanan.

As well as completing Structure S19, SIAC Butlers also fabricated, delivered and erected the 46 sign gantries along the M3 and toll booths at either end of the motorway.

Summing up the work, Pat Egan, SIAC Butlers’ Deputy Managing Director, says: “Bridge projects will continue to be a key area of growth for the company in the future. As a fully certified member of the BCSA RQSC Bridgeworks Scheme we’ve built up a proven capability in the fabrication and installation of road and rail bridges.” 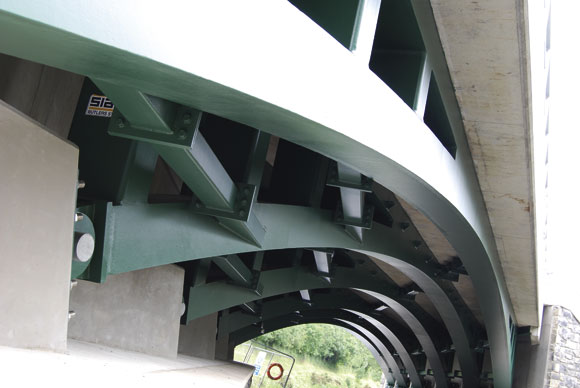 Currently under construction, the Dublin to Navan railway project was also proposed to address growing traffic problems in County Meath. Similar to the M3 motorway, the new railway will provide an alternative transportation route in and out of Dublin.
The overall project consists of two phases; Phase one includes the construction of a 7.5km double track railway line between Clonsilla near Dublin and the M3 Interchange at Pace, just north of Dunboyne in County Meath. This part of the project is scheduled for completion this year, while a second phase extending the line a further 34km north towards Navan is due to be ready by 2015.

Near Dunboyne the railway crosses the Royal Canal and this obstacle required SIAC Butlers Steel to erect a single span box girder bridge, requiring 120t of steel. The largest steel structure along the railway line, the company fabricated and delivered the six arched girders – 31m long – to the site and then assembled  them into braced pairs using 36mm diameter stainless steel bolts. The three assembled pairs were then erected in one full day lifting operation, using a 350t capacity mobile crane.

“This is a compression arch bridge,” explains Mr Callanan. “The steelwork is quite heavy-duty for a small bridge, but it has to be to carry a railway.”

Each of the girders is fabricated from 400 × 400 × 25 plated box sections, while the end pin connections are 110mm diameter.

“We also chose this design so it would mimic the other bridges along the canal,” explains Aidan McAdam, Project Manager for Irish Rail. “To get the required design and do it cost effectively we had to go with the steel option.”

SIAC Butlers has also been contracted to provide steel structures for three new stations along the Phase one route. Station buildings including a ticket office have been erected at Dunboyne and Pace, while a slightly smaller station building was erected at Hansfield. 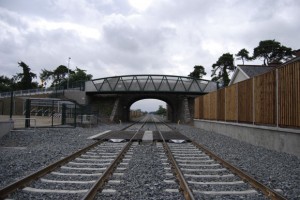 The station buildings are small portal frame structures, quick to erect and chosen for their cost effectiveness and sustainability credentials.

“Steel’s flexibility, which gives us the possible option of extending or enlarging the station buildings was one of the main reasons for using steel frames,” says McAdam.

SIAC Butlers has also installed steel footbridges at Dunboyne and Pace stations. Each weighing 25t and measuring 18m long, both decks for these structures were brought to site fully assembled and lifted into position in one operation.

“This is one of the benefits of steel bridges,” explains Mr Callanan. “We needed to do minimal site work as the whole footbridge was fabricated and assembled in our facility, and then brought to site in one piece. This also meant we didn’t interfere with other on-site trades.” 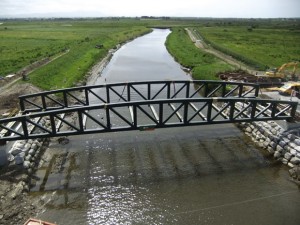