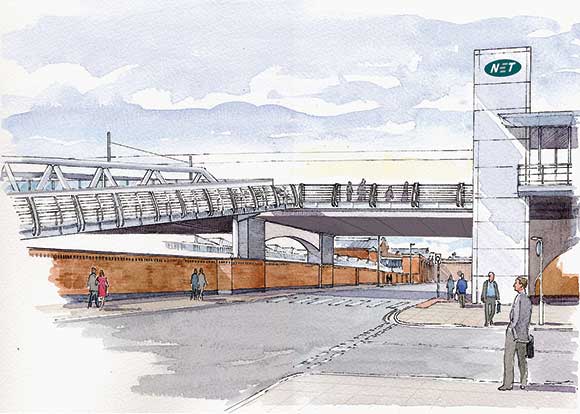 A total of four new steel bridges will be erected by Cleveland Bridge for the 17.5km Nottingham tram extension.

Two new lines, due to be operational by 2014, will go to Chilwell/Beeston and Clifton, linking directly into Line One at Nottingham Station.

The longest of the bridges will span the main railway station and Queens Road to connect the new lines with the existing tram terminus.

This two span 104m long structure will consist of 669t of steelwork, including a series of jumbo hollow sections. Cleveland Bridge plans to launch this bridge in two phases, one this autumn and the second in January 2013.

The other steel bridge structures to be built during the next six months are the 70m long Queens Road Bridge, the 45m long Lenton South Junction Bridge and the 61m long Clifton Boulevard Bridge.

Cleveland Bridge is also in the process of fabricating 115t of steelwork to widen the existing Wilford Toll Bridge.