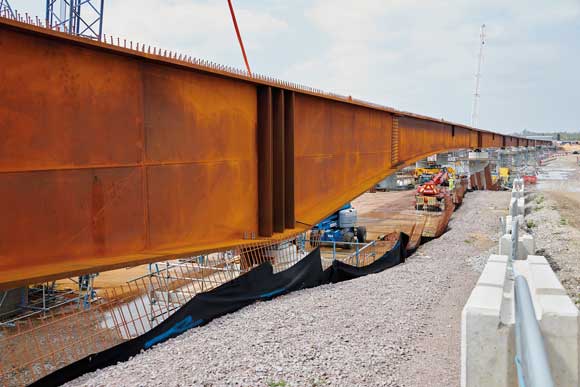 All structures over 40m long are being built with steel

A steelwork contractor’s expertise has enabled challenging crossings to be erected safely, accurately and on time for the A14 improvement scheme.

The existing road is notoriously congested and suffers from numerous delays as it is used by almost 85,000 vehicles every day, far more than it was originally designed to accommodate.

The improvements include a new bypass to the south of Huntingdon, widening sections of both the existing A14 and A1 trunk roads, the creation of new local access roads, and improved junctions.

A total of 34 bridge structures will be required for the scheme, crossing roads, railways and waterways. Working on behalf of the A14 Integrated Delivery Team, six of these structures are being fabricated, supplied and installed by Cleveland Bridge.

Steelwork for two of these bridges – the A14 Brampton Interchange Bridge and the East Coast Mainline Bridge – has been completed, while the viaduct over the River Great Ouse is currently ongoing and due to complete by early August. The final three bridges (see box) will all be completed by early 2019.

Commenting on the use of steel, A14 Integrated Delivery Team Construction Director Jim McNicholas says: “Prior to coming to site we carried out a value engineering exercise and from this we decided that any structure that was 40m or longer would be built with steel.”

Completed in January, the A1 Brampton Interchange Bridge is an 80m-long curved bridge spanning the A1. The bridge was constructed from 30 curved and cambered girders, each up to 34m long and weighing a total of 1,400t. 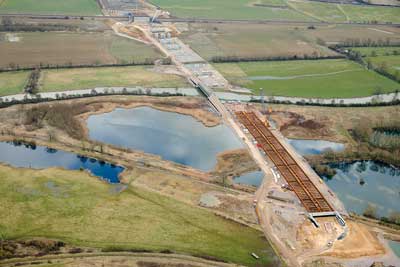 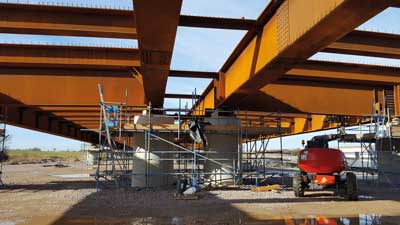 Cleveland Bridge says the major challenge on this bridge was the curved and cambered nature of the structure. It had to use advanced modelling software to enable the manufacture of the girders for the deck, which had a high skew and a tight radius.

The complex geometry meant the girders had to be transported singly and then spliced and braced together on site. To achieve the total bridge length of 80m, ten lines of three girders, weighing up to 55t each, were used to span between abutments and piers.

Cleveland Bridge says it developed a jacking system on top of the piers which allowed the girders to cantilever out beyond the central pier. This enabled a whole line of supporting trestles to be removed from the scheme saving time for the client.

All of this work had to be completed to a very tight deadline around live A1 traffic management. Switching the traffic from one carriageway to another was precisely scheduled, so bridge construction had to be completed on time to allow diverted traffic to run safely beneath the new structure.

The bridge over the A1 was completed on schedule within the tight programme timetable, ensuring traffic could continue to flow throughout the works. The entire construction of this complex bridge was completed in just nine weeks.

A different set of challenges was negotiated for the 40m-long bridge spanning the East Coast Mainline.

“The biggest challenge for this bridge was the short possession periods during which the bridge could be constructed,” says Cleveland Bridge Project Manager Michael Whinn.

“As one of the UK’s busiest rail arteries, all construction work had to take place when no services were running, and all work had to be programmed in close partnership with Network Rail.”

The bridge comprised five pairs of 40m-long girders, with each pair weighing 85t.

Initially the girders were due to be installed over five weekends. However, Cleveland Bridge says it was able to complete the work in just three weekends, within the 2am to 6am possession windows.

There was no room for error since any delay could have seriously disrupted rail services for thousands of passengers. Cleveland Bridge says it planned all works in meticulous detail to ensure that the steel girders were positioned well before the end of each possession window.

“This bridge was an exception and would have been built with steel even if it was less than 40m-long,” explains Mr McNicholas. “Only by using steelwork with a slim profile could we achieve the required headroom for the railway, while keeping the road at the necessary level.”

The project’s longest bridge structure is the 750m-long River Great Ouse viaduct, which is considered to be a showpiece element of the A14 project. The bridge not only spans the river, but also a large area of floodplain on either side. This viaduct will require 6,000t of steel, comprising 76 separate main girders and 800 cross girders.

A time-saving construction method has been devised, which involves another subcontractor lifting prefabricated concrete slabs onto the steelwork erected by Cleveland Bridge at the same time as steelwork installation continues ahead of this activity.

A key feature of this method are the close tolerances required between the deck slabs and supporting steelwork. This requires precise steelwork fabrication and installation to ensure clashes between the slabs, projecting reinforcement and the steel are avoided.

Supported on 16 pairs of piers, most of the main girders required for the bridge are up to 40m-long, 2m-deep and weigh 50t. The section of bridge that crosses the river has a longer 70m span, requiring more complex girders, with larger, deeper haunches to carry the greater load.

Cleveland Bridge says it suggested a different steel grade for these haunch girders, making them simpler to fabricate.

Cleveland Bridge is using a 600t-capacity crawler crane, which can lift all components for each bay from one position on both sides the river. This meant fewer crane movements were required, with no need to move the crane across the bridge footprint – reducing site congestion and saving time and money.

The A14 improvement scheme is due to be completed in 2021.

Cleveland Bridge is also fabricating and supplying three further bridges for the A14 scheme. These consist of the BN20 and BN21 Bar Hill Junction bridges and the BN27 structure, which is also known as the A14/A1 link overbridge.

The Bar Hill Junction consists of two identical 47.5m-long bridges, that will be constructed from six main girders each weighing 55t.

These two bridges are scheduled to be assembled on site, while being supported on trestles, before being manoeuvred into their final positions by Self-Propelled Mobile Transporters (SPMTs) over two successive weekends in September.

Measuring 102.5m-long, BN27 will be last of Cleveland Bridge’s six bridges to be erected in early 2019. Curved in plan and elevation, the bridge will consist of nine pairs of girders measuring 29m, 34m and 39.5m long.