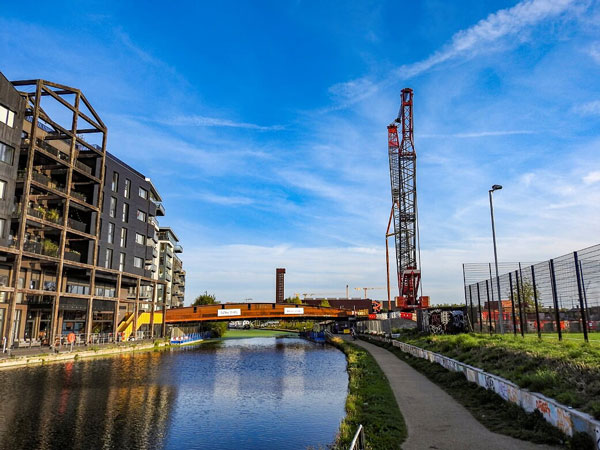 A new bridge connecting the communities of Fish Island and Queen Elizabeth Olympic Park has been installed by one of Europe’s largest cranes.

Due to open in early 2021, the steel composite bridge will eventually become a bus, cycle and pedestrian access to the new residential community of Sweetwater and beyond.

The 400t structure had been pre-assembled alongside the Lee Navigation canal. It was then carefully lowered into place overnight by one of Europe’s largest cranes and a team of experts from main contractor Balfour Beatty and steelwork subcontractor Severfield, while the canal was temporarily closed.

Its installation marks another major milestone in the London Legacy Development Corporation masterplan for new homes, transport infrastructure and landscaping enhancements on the former Olympic Games site in east London.

The bridge has been completed in advance of the new homes currently being built at East Wick + Sweetwater, a major new residential community that will provide more than 1,800 new homes alongside schools, nurseries and community spaces to the area.

Paul Brickell, Executive Director of Regeneration and Community Partnerships at the London Legacy Development Corporation, said: “Monier Road Bridge will make it easier for local residents to get to the facilities being created on the Park like schools, health centres and jobs as well as the amazing parkland and venues. The bridge will help us to deliver the Mayor’s Healthy Streets policies by encouraging walking and cycling and creating new routes for public transport serving residents on Queen Elizabeth Olympic Park as well as Hackney Wick and Fish Island.”