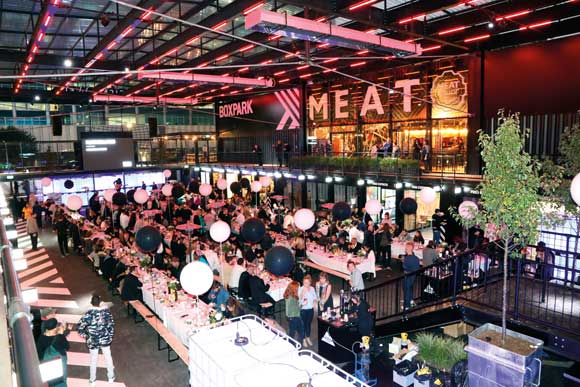 Topped with a steel-framed roof structure, an innovative eating and drinking venue has recently opened in Croydon as part of a large-scale redevelopment scheme.

Following on from the successful launch of the first Boxpark in Shoreditch, east London, this latest venue forms part of the Ruskin Square development that is set to transform a large area of Croydon.

Commenting on the scheme that offers 42 restaurants and bars, Boxpark’s founder and CEO Roger Wade says: “Croydon is one of the last London boroughs to be developed. Stratford, White City and Nine Elms have all seen recent new developments. I want everyone to re-think their view of Croydon. It’s the home of Kate Moss, Tracey Emin and now Boxpark!”

The new Boxpark has direct pedestrian access to the adjacent East Croydon station, as well as a footpath that will link into the new Ruskin Square commercial development.

The proximity of the station meant the project team had to ensure the cranes did not overslew the railway lines at any time and in order to avoid this and make the erection sequence as easy as possible, the containers and the project’s steel roof nearest to the station were installed first. The project team then worked its way out of the site in a southerly and sequential manner towards Dingwall Road, where the site entrance is located.

Although the containers and the steel-framed roof are independent structures, both had to be installed simultaneously by steelwork contractor TSI, as erecting them individually would have been problematical, especially as the site is very tight and confined. 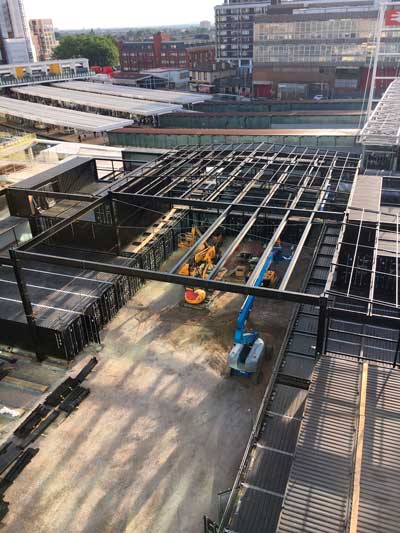 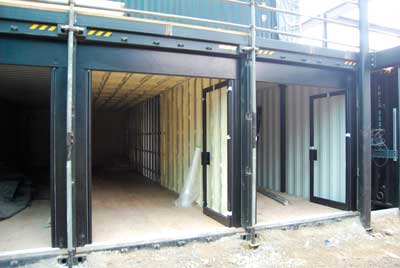 Shipping containers are used as eating and drinking outlets 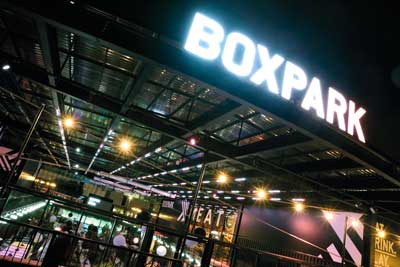 “The containers were brought to site in batches of nine and these were then lifted into position by TSI who then erected an adjacent portion of roof,” explains Randall Developments Project Manager Steve McNamara.

Prior to being delivered to site the 2.4m wide x 6m-long containers were all modified offsite in readiness for their installation. This work involved cutting out entrances and side doors into some units to allow two or three containers to be joined together on-site to form larger outlets.

For the container installation TSI had to design a bespoke lifting frame as company Draughtsman David Williams explains: “Because of the modification work the containers had lost some of their rigidity and lifting them conventionally with a crane would have damaged them.”

The containers are arranged into two main banks separated by a wide-open courtyard, while a third row of containers fills in the back elevation adjacent to the station.

As the upper containers are not stacked in a conventional manner as they would be on a ship or quayside, stiffening posts to absorb the unusual loads were added to the ground level units during the modification process.

As the south elevation has no containers and is effectively the main entrance, a steel-framed footbridge spans this area at first floor level.

In order to cover all three of the outdoor seating areas, the steel-framed roof canopy structure is cruciform-shaped, with the central zone spanning the courtyard and     the two wings covering the upper seating zones.

“There are 12 primary steel columns for the roof,” explains Mr Williams. “These support a series of primary beams and secondary posts on to which there are purlins that form the gentle pitch of the roof structure. It is clad with polycarbonate which allows natural light to penetrate the areas below.”

“The roof structure, which measures approximately 20m x 20m, has been designed as a sway frame to ensure rigidity, while a series of Macalloy cross bracings located between the primary columns adds some extra lateral stability,” says BDP Civil and Structural Engineer Director Jonathan Pye.

As well as having a link into the railway station and the Ruskin Square scheme, Boxpark also has two main street level entrances, the main Dingwall Street entrance and another on George Street.

Both of the entrances are adorned with curved beams forming a canopy. While along Dingwall Road the main entrance features steel staircases leading to the first floor and two further outdoor eating zones that are outside of the roof’s span.

Mr McNamara says Boxpark may only have a six-year lifespan, after which it will be dismantled to make way for the final commercial building in the Ruskin Square development.

“In the meantime Boxpark will provide the area with a focus and a destination while all around the regeneration programme in central Croydon progresses.”

In summary a Boxpark statement says: “Forty one of London’s most exciting and vibrant operators will combine to deliver an endless range of foodie options, including grab-and-go artisan coffees, juices and wraps alongside grab-and-stay tapas, pizzas plus many more.”