The Forum when finished.

The Forum at Billingham, Co. Durham, groups together in a single structure facilities for a whole series of sports and entertainments and in this respect is unique. The only other comparable project is Crystal Palace, which is on a much bigger scale and directed at training the expert and staging national and international events. In contrast, Billingham Forum is very much an everyman’s place, although some major sporting events will take place there from time to time.

The range of activities catered for is wide and varied, the accommodation including (1) an ice rink with seating for 1,000 spectators; (2) 110-ft long swimming pool and a smaller learner’s pool, with seating for 500 people; (3) Sauna baths; (4) 120-ft by 60-ft sports hall for indoor tennis; (5) small sports hall, 40 ft by 40 ft, for judo, table tennis etc; (6) three squash courts; (7) rifle range, to be used also for cricket practice and archery; (8) indoor bowling green to E.B.A. standards, and (9) a theatre seating an audience of 675 people. There is also a restaurant seating 500, a licensed bar, kitchens and changing accommodation, dressing rooms etc for each main activity group.

The Council’s philosophy in commissioning this building was simply that having built the equivalent of a new town and attracted people and new industry to the area their responsibility did not end with merely providing shopping areas, services etc. People need entertainment and the Forum is intended to fulfil this function. They felt, too, that it was not a place to produce Olympic athletes, although serious training can obviously be done there, but a place where everyone in the family can find an activity to enjoy. In an effort to overcome the segregation of activity groups the communal facilities of the bar and restaurant are common to, and overlook, all the areas. It is hoped that this will create interest in the other activities in the building: swimmers can watch ice skating, theatre goers can see indoor games being played and so on. 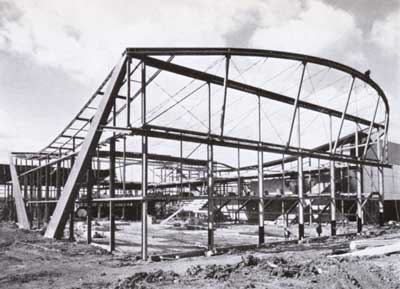 Steelwork for part of the anchoring system

The building is planned as a square measuring approximately 300 ft by 300 ft with the main activity groups situated at each corner. The circulation area is around a central open court and serves all groups: it is on two levels giving access to changing rooms at ground floor and the restaurant and facilities for spectators at first floor. Flexibility of use in as many areas as possible was an important consideration when designing the Forum. For instance the theatre can be used proscenium, open stage, Elizabethan or ‘in the round’ form: it has full 35 mm cinema equipment, and is suitable also for conferences, lectures and recitals. Seating is arranged not in tiered rows but in columns of individual boxes on the lines of an Italian opera house.

The ice rink has the biggest seating capacity in the building and in addition to holding ice spectacles, it will be used for other large-audience attractions such as professional tennis or championship events for basketball etc. This has been made possible by the provision of special flooring under the rink which gives a perfect playing surface when the ice is removed. The ice can be removed, a 12-hour event held and the ice refrozen in a 24-hour period. It is proposed also to hold large orchestral concerts in the rink and with temporary seating an audience of 3,000 could be accommodated: the hall is large enough to allow the use of a 70-piece orchestra.

Construction Details
With the exception of the theatre auditorium the structure of the building is all steel. The sports facilities, swimming pool, stage tower, communal and circulation areas are conventional beam and post construction on a 20-ft grid. Precast flooring and proprietary metal roof decking spans 10 ft between intermediate members and purlins.

The ice rink construction, however, is of a more interesting nature because the roof is supported by a Swedish system of stressed wire ropes. This system was adopted because it provided a simple method of obtaining a clear area of 200 ft by 140 ft without columns. The basic principle of this form of construction involves the use of nine wire trusses spaced at approximately 10-ft or 11-ft centres. These consist of a 39 mm upper and 25 mm lower wire stressed in opposition to each other by means of diagonal tension rod ties to roughly a diabolo shape. The roof decking is attached directly to the wires.

One of the problems associated with this type of roof is the anchorage of the ends of the cables. The usual methods are either to anchor to heavy beams or the structure or alternatively to use the tent guy rope principle, but neither scheme was attractive to the architect and consultants, who in consequence developed a system of bow string trusses laid almost flat, to which the upper and lower cables are stressed. Where the ice rink abuts the main part of the building at the end, the lower cables are anchored to the main steel structure, which has been suitably braced. Box frame struts keep the bow string trusses apart. The reactions at the ends of the trusses are transmitted to the ground by four raking tapered box frame columns set back at about 38 degrees to the horizontal: the columns are 1 ft 6¾ in wide and taper from 8 ft deep at the base to 3 ft at the head. The foundations to each column consist of two tension piles taking about 350 tons uplift and a compression pile taking about 500 tons downward thrust. A reinforced concrete compression beam underground keeps the two pairs of foundations apart. The side wall cladding is carried on a separate steel structure.

Heat for the building is from Billingham’s district heating system: Billingham was the first authority in the country to adopt district heating from a central boiler house. In general, heat losses are covered by radiators and pipe coils and comfort conditions maintained by a plenum system.

The Jarwerth system of rigid cable roof construction illustrated diagrammatically here made possible an unobstructed area of 200 ft by 140 ft.