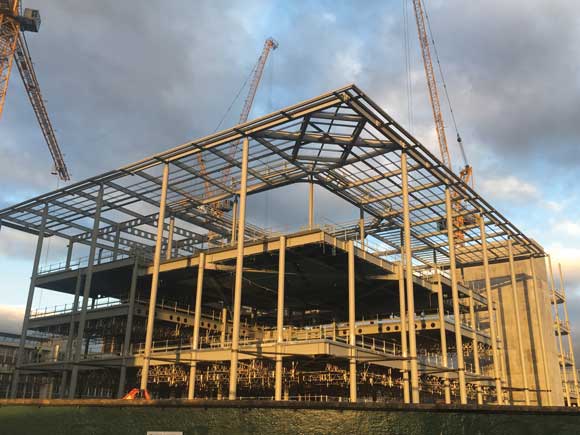 On the plot of the city’s former bus terminal, the scheme will eventually yield commercial office space, a new frontage to the railway station and most prominently a new headquarters building for BBC Wales.

Plot 1 of the scheme, consisting of an office block, was handed over last year and plots two and three are now under way. This second part of the development will see main contractor ISG construct the new BBC Cymru Wales Broadcasting House and Two Central Square (a 10-storey speculative commercial building) – totalling an £80M package.

Designed by architect Foster + Partners, the new home for the BBC is a 13,900m² building set over five floors and includes office, studio and production areas, providing working space for over 1,200 BBC Wales staff. 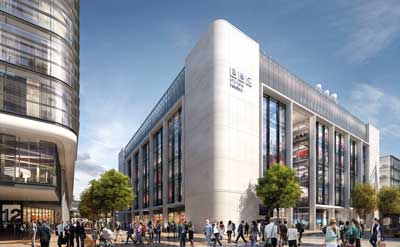 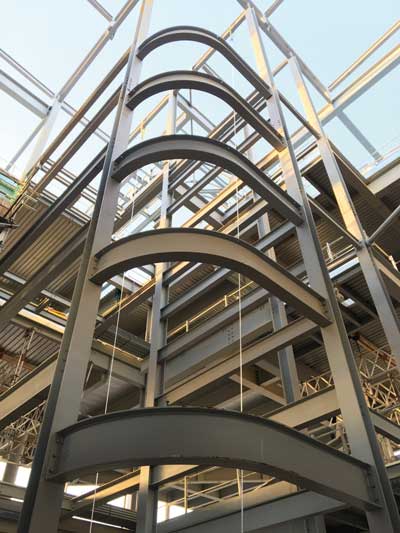 Curved members form the internal façade of the hub 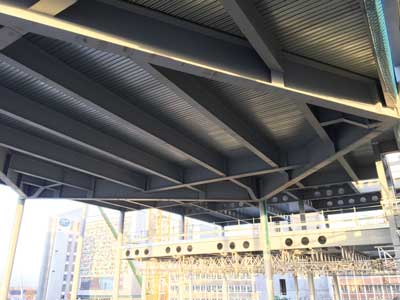 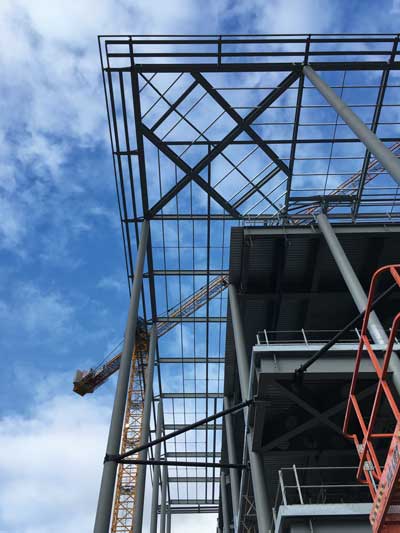 A canopy tops the media hub

ISG’s UK Construction West Regional Director Jon James says: “Constructing the new headquarters for BBC Wales is a major win for the business, and brings all of our office expertise to bear on one of the largest ever private developer-led projects to be built in Wales.”

Prior to the steel frame for the BBC HQ going up, ISG had to form a 7,000m² basement structure by installing secant piles and excavating approximately 50,000m² of material, which was removed and re-used offsite.

The BBC building is a hybrid structure, with a reinforced concrete frame to ground floor level, encompassing two basement levels, three concrete cores and a steel framed superstructure for the upper floors.

“Steel has been used for a number of reasons such as speed of construction and the ability to create the 18m-long clear spans in the offices which provides the BBC with maximum flexibility,” says ISG Project Director Kevin McElroy.

“To help speed up the programme we also changed the design of one core from reinforced concrete to steel.”

The design for the BBC building is based around creating visibility and connectivity by allowing as much daylight into the inner parts of the HQ as possible.

To this end it consists of three main elements: two five-storey office blocks arranged in an L-shape around a centrally positioned media hub structure. Separating the offices from the hub is a large 9m-wide and 30m-high covered atrium.

“All three parts are connected to form one large steel frame with the cores, which are all positioned in the offices, providing the structural stability,” explains Arup Director Ben Tricklebank. “The media hub has no cores, but bridges across the atrium connect it to the offices thereby providing stability.”

Steelwork contractor Severfield began its erection sequence with the media hub as this is the most complex part of the HQ and the area that will require the longest fit-out.

The majority of the project’s steelwork will be left exposed within the completed building and consequently aesthetically-pleasing CHS columns are predominantly being used.

Visible connection details have been designed to be as aesthetic as possible, with many beams tapering to provide the slimmest connection.

Five acoustically isolated TV studios are located throughout the five floors of the hub, with the main and largest facility positioned at second floor level. To construct the necessary isolated box-in-box configuration, the studio steelwork is positioned on acoustic pads set into the concrete slab.

“The studio steelwork has to be erected later than the surrounding main frame as we have to wait until the floors have been cast to ensure acoustic separation is achieved,” explains Severfield Project Manager Glen McCleary.

To create the required column-free space for a ground floor studio, two transfer beams have been positioned at first floor level. These plate girder beams measure 20m and 17m-long and weigh 23t and 14t respectively.

Most of the steelwork is being erected with the on-site tower cranes, but for these transfer beams a 500t-capacity mobile crane was needed.

The hub’s uppermost floor steps back to form an outdoor terrace that overlooks the public realm in front of the railway station, while a third of this level is taken up by a roof garden containing a number of planters for shrubs and small trees.

Supporting the roof garden and creating the large column-free space below for the main studio called for some bespoke steel design. Four 800mm-deep plate girders, weighing up to 12t and arranged in a diamond formation, support the roof garden.

This formation was chosen for its efficiency by lessening the distance the steelwork has to span. The girders are connected to the surrounding steel frame via a series of nodes, all of which cater for multiple beam connections and weight up to 3.5t each.

Topping the hub is a large canopy roof, supported by ten 28.2m-high CHS columns positioned along two perimeter elevations. Elsewhere the canopy is supported off the main internal steel frame.

“The canopy supporting columns were brought to site in single pieces as a splice would have ruined their appearance,” says Mr McCleary. “They are the longest elements to have ever left our Northern Ireland facility and transporting them to site was very challenging.”

Severfield completed the media hub steel erection at the end of last year and it is now concentrating on the atrium and the two office areas.

Housed within the atrium are three steel feature staircases, providing connectivity between the hub, atrium and the adjacent offices. 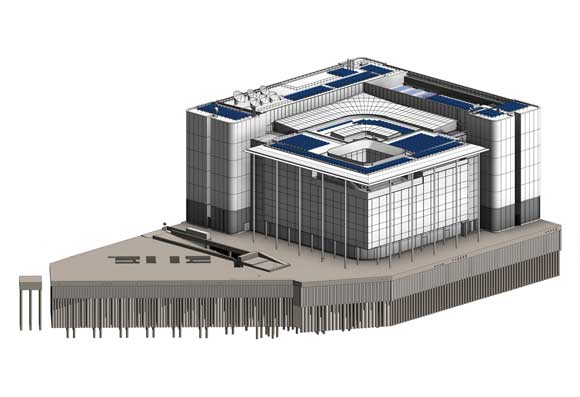 The entire structural frame design is based on 9m bays, creating clear spans of 18m in the offices. Fabsec cellular beams have been used throughout for service integration and to create these long spans efficiently.

The long spans and the desire for an exposed soffit detail throughout the scheme has added an extra element to the construction programme. With these long grids the metal decking has to be temporarily propped because it is not stable until the slabs are cast.

“The propping follows-on behind the steel and metal decking installation,” says Mr McElroy. “Once a couple of floors have been completed, they are de-propped and the equipment is then re-used on the next levels.”

Summing up Alan Bainbridge, BBC Property, said: “Getting the BBC project from the design board to site has been a huge team effort and we are delighted that this project is now becoming a reality. Together with Rightacres and ISG and the respective design teams we are developing a facility which delivers real value for money.”

The BBC building is scheduled for a Spring 2018 completion, after which a fit-out programme will commence.