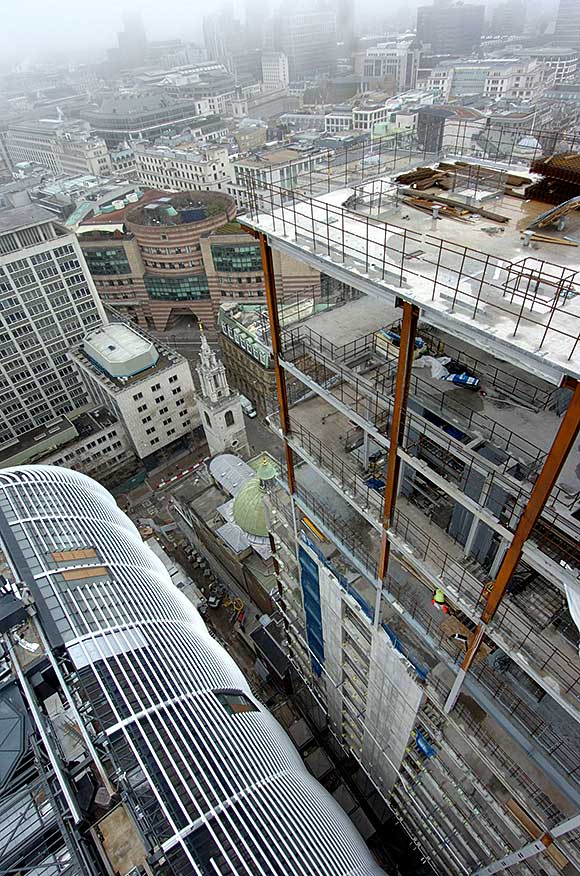 A steel frame along with a Bi-Steel core with the strongest panels ever erected are helping a new commercial development for a banking institution achieve its desired architectural vision. Martin Cooper reports.

One of the latest additions to the City of London’s skyline is a new headquarters building for merchant bank Rothschild. Situated roughly halfway between the Bank of England and Cannon Street Railway Station on St Swithin’s Lane, the new 16-storey building will allow the bank to bring together all of its London employees.

The redevelopment – Rothschilds third building on the site since it moved to London during the Napoleonic Wars – is the first UK project to be designed by Pritzker prize-winning architect Rem Koolhaas.

His design has taken into account the confined and historic site with a double height glass ground floor entrance area that will open up pedestrian views to the Christopher Wren Church of St Stephen Walbrook and its churchyard, creating a transparency previously unheard of in this part of the City. 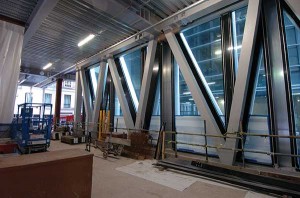 As with many commercial developments in the Square Mile, Rothschilds new headquarters is a steel-framed structure, braced and deriving the majority of its stability from cores. The speed and ease of construction in a city centre site means steel is usually the favoured framing material for such projects.

The desired open plan entrance area, with the aforementioned views of the adjacent church, lead the designers to incorporate a number of steelwork features. Firstly a large storey high transfer truss spans one elevation of the structure at ground floor. Spanning a basement loading bay, the truss

supports a main column that in turn supports 15 upper storeys and also opens up the ground floor entrance lobby, by removing column lines.

“Architectural limitations on steelwork sizes led us to use very heavy fabricated members for this truss,” explains Andrew Henstock, Rowen Structures Project Manager. “This meant we had site welded joints for the internal members to the booms.” 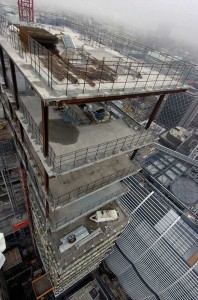 The top floor will house an open plan conference room

As the truss was site welded the erection sequence was critical and a temporary works scheme was provided that checked the load paths as each piece was added.

With these design requirements Rowen had to bring the truss to site piece-small as the on-site tower crane didn’t have the capacity to lift the truss into place as one completed section.

The truss, which is 4m deep and spans 15m, was brought to site in 12 pieces. This consisted of the top boom in three sections, the bottom boom in one section, plus eight diagonal members. The top boom of the truss is 400mm x 400mm and fabricated from 100mm thick plate, while the bottom boom has identical dimensions but is made from thinner 45mm plate.

“The architectural concept for the building is a central cube that is served by three annexes. The main space that forms the cube is interrupted by only four internal columns – consequently all structural elements have been pushed to the periphery of the building – including the cores.  The eccentricity of the architectural plan meant that we needed additional stiffness – using Bi-steel provided this while allowing us to reduce the number of internal structural walls,” says Andrew Grant, Arup Project Engineer.

An L-shaped core begins at ground floor level and rises 54m to the structure’s 10th floor. On this level the building’s floorplate decreases and the project’s other core carries on by itself to the building’s level 15, but with one major change. This core starts at ground floor as a concrete structure, but from level 11 to 15, it is a Bi-Steel core containing two lift shafts.

“As the upper levels are smaller there was a need to preserve as much floorspace as possible and Bi-Steel cores take up less space than equivalent strength concrete cores,” explains Corus Bi-Steel Principal Engineer Chris Beattie.

Both of the Bi-Steel cores were erected at the same time as the structure’s main steel frame, which saved time and resources.

All of the building’s floors feature Fabsec cellular beams to help maximise the structural void and create maximum floor to ceiling heights. As there was a stipulation to keep the floor depths to a minimum all connections are via thick column flanges which made the design tricky. ‘We had to ensure that the beams could be erected without any bolt clashes,” explains Mr Henstock.

The central element of the tower will be clad in clear glazed curtain walling, but the cladding to the annexes will have a metal mesh integrated into the glass that, combined with the aluminium, will give the building a solid metallic feel.

To accommodate the glazing and the architectural vision, the majority of the perimeter columns are located within the façade and needed to be very slender. To achieve this 200mm x 200mm fabricated SHS columns are used above first floor, while 250mm x 250mm SHS columns, concrete filled for robustness and fire protection, are used at ground level.

“This proved extremely challenging to incorporate,” says Mr Henstock. “As the dead load on the structure decreased the net tension values increased significantly and this lead to some details being fully welded to ensure that the loads could be developed.”

The building is scheduled for completion this summer. 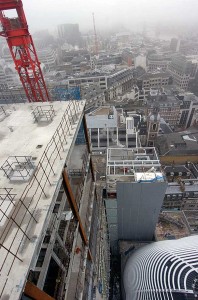 The project’s L-shaped Bi-Steel core has panels for its lower two layers made from 20mm thick plate, which represents the strongest panels Corus has ever supplied for a building core. The plate decreases to 8mm plate for the upper five layers where the strength and stiffness requirements are reduced. Bi-Steel consists of two plates connected together by an array of friction-welded bars. The space between the plates is filled with concrete on site to produce a very strong composite core system.

The concrete filled void on this core stays constant at 300mm thick for its full 54m height.

The panels and corner module typically measured 2m wide by 7.8m high and were filled after each layer was erected.

“On the lower part of the core there are some large loads coming from a supported transfer truss,” explains Corus Bi-Steel Principal Engineer Chris Beattie. “Thick plate was needed to maintain the core’s stiffness.”

This core is also located along an elevation that is under a metre away from the adjacent building. With no room to erect the core from outside of the project’s footprint, it was erected from the inside, something that would not have been achieved with a typical mechanised concrete core system.

The core was erected at the same time as the main steel frame meaning construction of the steel frame could start sooner particularly with regard to the critical area of getting out of the ground.

The panels for the core were designed and manufactured by Corus and then delivered to Rowen Structures. Rowen designed and detailed the beam connections and completed the fabrication works, including drawings, utilising its in-house expertise gained from having used Bi-Steel previously. 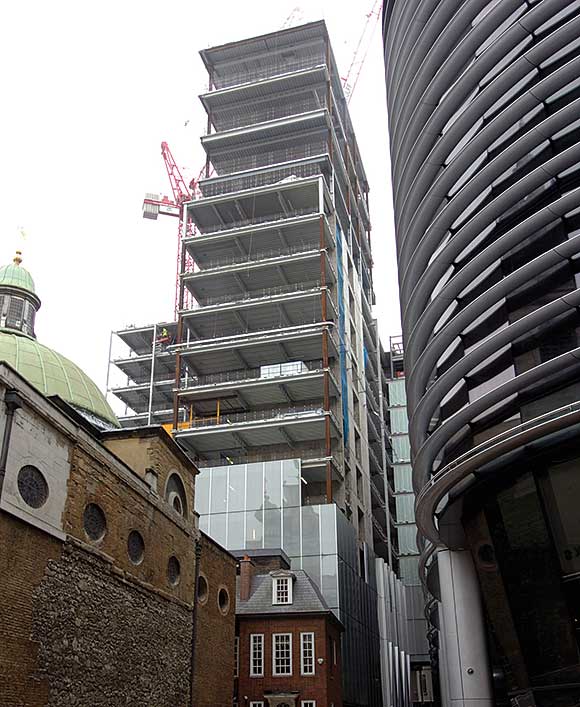 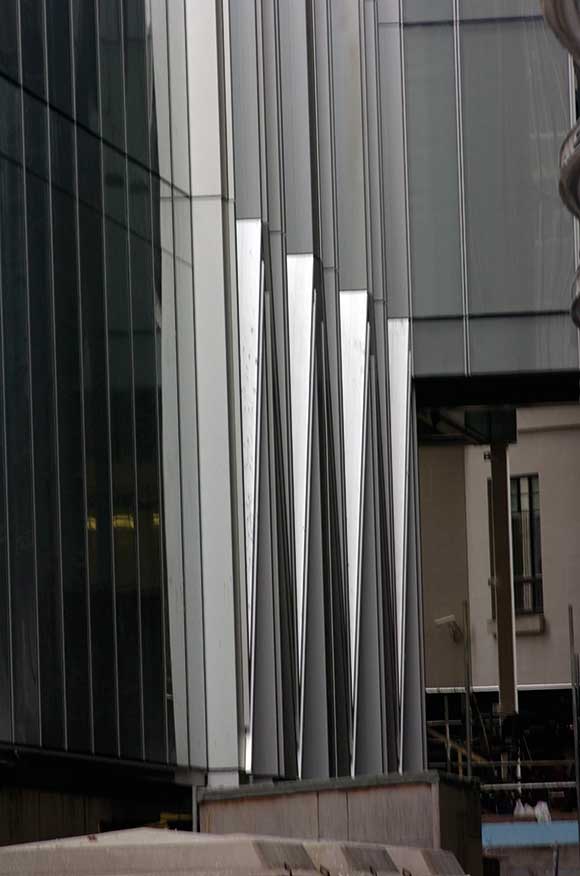 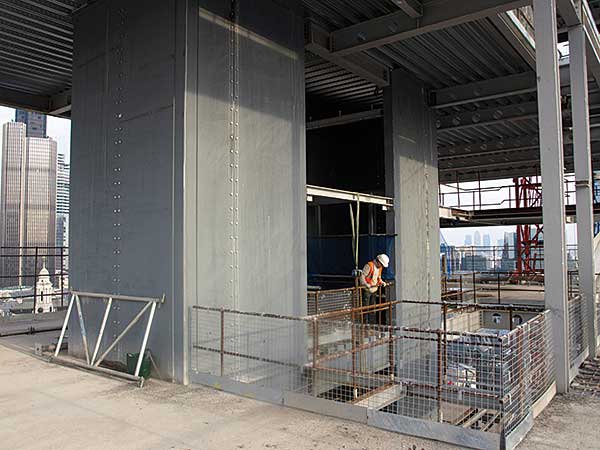