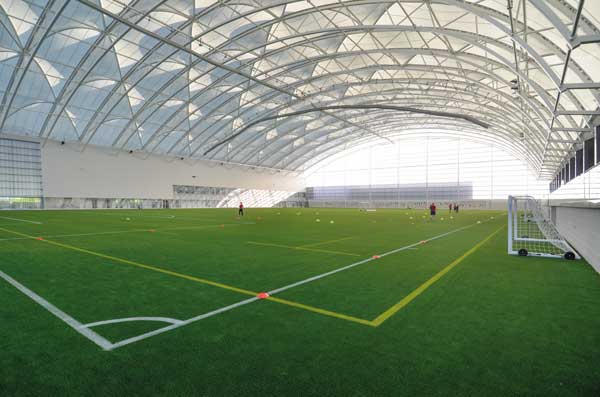 It comprises a full size indoor 3G synthetic pitch for football and rugby with spectator seating for 500 people, a nine-court sports hall, a 100-station fitness suite, as well as a high-performance wing that includes areas for hydrotherapy, strength and conditioning, rehabilitation, offices and a classroom.

Designed by Reiach and Hall Architects, the project’s key feature is the roof, comprising asymmetric steel arches and clad in tensioned PVC. Its form was inspired by the angle and trajectory of a Roberto Carlos’ goal scored against France for Brazil in 1997.

The design has a simple layout with two routes running east to west through the building – a public route to the north and a high-performance route to the south; this allows the two areas to operate autonomously.

Steel arches at 7m centres span over the football hall and sports hall from buttresses on each side onto a central street of piers. 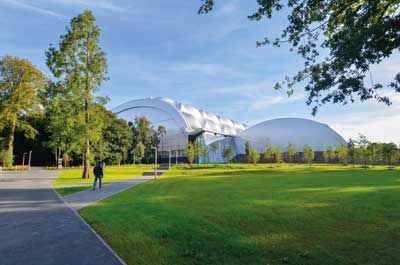 The simplicity of the arrangement masks the technical challenges in realising the form. The football hall roof uses an asymmetric arch profile, following Reiach and Hall’s concept for the geometry.

In order to meet the project’s budget, Engenuiti worked together with the steelwork contractor to develop a simple and elegant 2D truss design for the arches, which required less prefabrication than a previous design and provided material savings for the project.

Central piers support the ends of the football pitch and sports hall arches, which converge at a single point behind the listed wall in an area known as the street.

Initially these piers were conceived as reinforced concrete elements. However, a review of the material options explored the overall programme advantages of bringing this element within the steel package. Following this review, the steelwork option was selected giving both programme and cost advantages.

The roof structure acts as an umbrella over the public fitness area and high-performance wing, which are both constructed as conventional steel-framed structures.

The roof arch is formed from three curves meeting at tangents and, while this is stable once vertical, it has little structural strength in its minor axis. This meant that building the trusses flat on the ground and then lifting them vertically would require extensive temporary works, which with 13 to lift would have substantially increased the build costs. Building the trusses vertically on the ground was also ruled out due to the height of any temporary frames which would have been required for temporary stability during assembly.

The solution was to utilise the permanent design for the temporary works. Simple stubs were designed to transfer the load from truss to truss with chord ties and then the stubs were matched at each truss. Components could then be connected directly to the previous section; this allowed a full truss to be built in the air.

The challenge was then how to erect the first truss. As this was at a gable the slender gable posts, which were themselves trussed, could be propped first and then roof truss segments landed on top and joined together to form one complete arched truss.

Oriam’s steel structures are durable and require little maintenance, extracting maximum value from and minimising its whole-life costs. They can also be re-used or recycled at end of life further enhancing sustainability.

The steel-framed structures and regular column grid arrangement for the office, café and elite sports areas are all adaptable for future changes of use.

As Oriam’s steel structures are durable and can be readily adapted, it also improves the economic viability of the centre for modernisation in the future.

Catriona McAllister, Chief Executive Officer of Oriam stated ‘Heriot-Watt University, in partnership with the City of Edinburgh Council, worked extensively with Sport Scotland and the partner sports to create a world-class facility that also provides extensive access for the local community.’

‘There was a great team spirit amongst everyone involved in the delivery of the project – it was a very exciting process from start to finish. The finished project is something that all of Scotland should be extremely proud of, and the response from everyone who has toured the site since its completion confirms that a truly world-class facility has been delivered. We are absolutely thrilled with it.’

Summing up, the judges say two parallel vaulted forms spring from a central spine; the larger one covers a football pitch, whilst the smaller covers a sports hall. The elegant lightweight steel trusses resulted from a collaborative effort by the designers and contractor, with the construction methodology informing the roof structure and supports from which it springs.