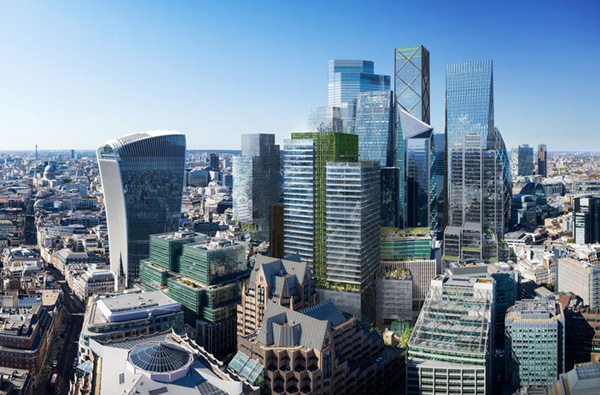 Eric Parry Architects has released plans for a 36-storey office building with a living green wall running all the way up one façade.

The scheme, at 50 Fenchurch Street in the City of London, is the proposed new home of 500-year-old City livery company, the Clothworkers’ Company.

The 150m-tall project would involve the demolition of the existing 1950s livery hall, designed by Herbert Austen Hall and refurbished by Donald Insall in the 1980s.

It will include a replacement underground livery hall for the company topped by retail and the 5,700m2 new speculative office building, public roof garden and winter garden and a new public space based around a restored Grade I church tower.

According to the plans, it will provide a new public space, half of it on the ground floor. A double-height winter garden will be located on the 10th floor and will be accessible to the public year-round.

The adjacent Grade I tower, the Tower of All Hallows Staining, which was built around 1320, and the Grade II Lambe’s Chapel Crypt, which dates from 1200, will both be restored under the plans.