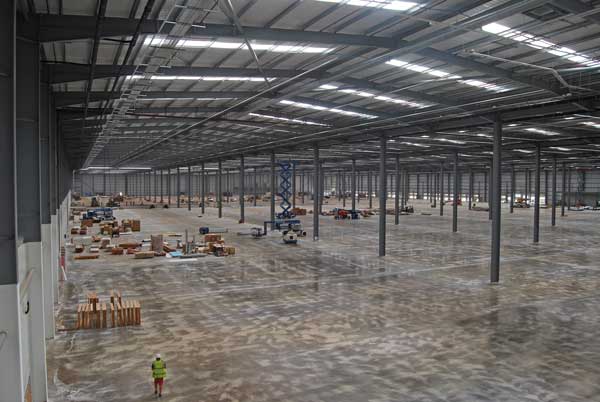 Large open spans were an important consideration for Amazon

The centrepiece of a new distribution park is a huge warehouse for the world’s largest online retailer.

Known as unit one, and the first of three new centres to be built on the site, the structure measures 504m in length and has a width of 184m, offering just over one million square feet of floor space.

Main contractor Winvic started on this greenfield site, which is separated from Mountpark’s existing distribution park by a main road, back in 2015.

Groundworks, drainage and some hard-standing surrounding the building’s footprint was mostly completed prior to Caunton Engineering’s steel erection programme starting.

Working on a design and build contract, Caunton completed its erection programme in just nine weeks, despite some inclement weather during May and June.

The structure is a large portal frame consisting of six spans. The two outer spans are 35m-wide, while the inner four spans measure 28.5m wide. 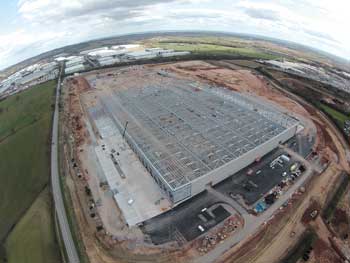 The Bardon site takes shape with the Amazon warehouse 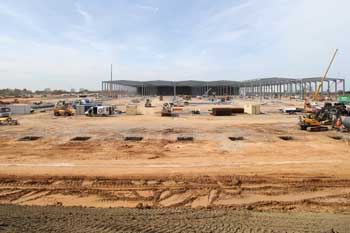 Unit one under construction

Perimeter columns are large 914 UB sections, set at 8.5m centres. Internally the columns are all bespoke columns fabricated from plate. Arranged in a hit-and-miss configuration throughout the structure, thereby creating more column-free space within the building, the columns measure 650mm deep × 400mm wide, with 25mm flanges.

“The perimeter columns are larger sections than we’d usually use as they were initially designed to support a mezzanine level, which was subsequently removed from the design,” says Caunton Engineering Senior Structural Engineer Gavin Christie.

Using bespoke plated sections was deemed the best way of optimising inertia throughout the portal frame.

“The internal valley columns need to be stocky as they are unrestrained over their 16m height,” adds Mr Christie.

For the erection programme Caunton used four 50t-capacity mobile cranes in conjunction with a variety of MEWPs.

“We worked in an arrow formation, erecting the two innermost spans first up to certain amount of bays, and then erecting the outer spans along with the perimeter columns. This process was repeated all through the length of the structure” explains Caunton Engineering Erection Manager Richard Patterson.

“In this way the central spans were stable once they were up and they then offered stability to the outer spans during erection.”

All of the roof rafters were brought to site in two pieces, which were spliced on the ground to form either one 35m-long or 28m-long section and lifted into place as a single element.

However, as other trades were following on behind the steel erection, floor space was sometimes at a premium and on these occasions each half of a rafter was lifted into place individually and spliced together in the air.

Along one elevation the distribution centre has over 50 truck loading bays, while on the opposite side of the building there is an attached office block.

The single-storey structure is 220m-long and consists of two 11m-wide spans throughout its length. Topped with a gull-wing roof structure, a design where both sides of the roof pitch inwards, the office is surrounded by a 4m-high parapet that hides a plant deck.

The office structure gains its stability from the attached distribution centre main frame, as well as from strategically placed moment frames.

Speed is of the essence on all construction projects and this one is no exception. Having completed its steel package ahead of schedule, other trades were able to get a head start and so ensure the distribution centre meets its October completion date. 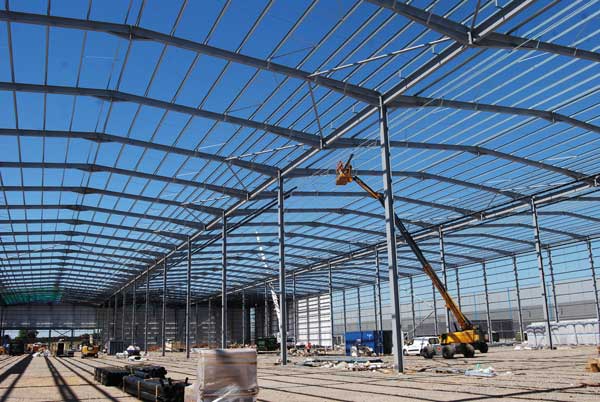 On an adjoining site, with a similar project team containing main contractor Winvic and steelwork contractor Caunton Engineering, unit two of the development is under way.

This portal-framed structure has a similar design to its larger neighbour, although it is less than half the size of the Amazon warehouse offering 29,264 m² of warehouse and office space.

The speculative build structure measures 250m-long and consists of four 28m-wide spans, with perimeter columns spaced at 8m centres and valley columns again arranged in a hit-and-miss configuration. A total of 850t of structural steelwork was needed to complete this unit.

Aiming for a BREEAM ‘Very Good’ rating, unit two is scheduled to be completed by the end of the year, by which time unit three, the smallest of the three distribution centres, should be under way.