All change at Newport station 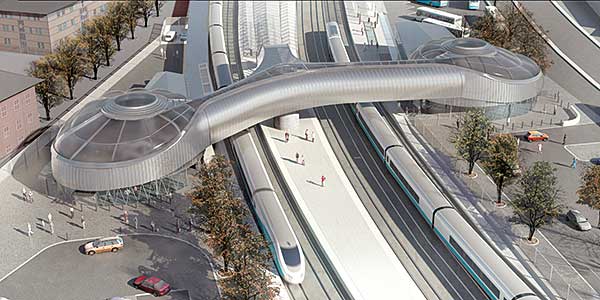 Artist impression of the footbridge at Newport station

As part of a city wide regeneration masterplan, Newport railway station is currently being redesigned to provide a striking civic building with steel playing a significant role in the design.

Newport in Monmouthshire is widely regarded as the gateway to South Wales and is the first major conurbation visitors encounter after crossing the River Severn. In order to bolster this reputation and part of a large regeneration project, the city’s railway station is in the midst of a radical transformation. Designed by an Atkins Grimshaw partnership, the new station has an organic spiraling look and consists of two terminals linked by a central footbridge. 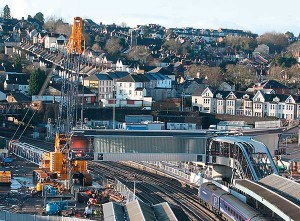 The city is bisected by railway tracks and as a result, each half of Newport has developed its own character. The design for the new station is said to embrace this divide by creating two terminals; the north terminal which is on the civic side of the city and will focus on the needs of commuters and a south terminal on the commercial side catering more for tourists and daytrippers.

Ticket facilities and platform access are split equally between the two terminals, and these along with the linking footbridge are housed within continuous ETFE and aluminium clad spirals. The use of an ETFE wrap over a steel structure not only creates a very bright and airy space but also, due to the lightness of the material, the structure requires minimal support.

Chris Pembridge, Atkins Regional Director, says this was one of the reasons why steel was chosen as the main framing material. “We looked at timber

and concrete for the terminals but went for steel for its ease of construction as well as it lightness. The footbridge on the other hand was always going to be a steel structure because of the spans and its ability to achieve the organic form we were seeking.” 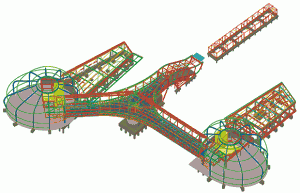 Steelwork contractor SH Structures fabricated and then delivered the footbridge decks to site in six sections.

“Each span came to site in two halves, with a splice down the middle,” explains Dave Perry, SH Structures Contracts Manager. “The longest sections were 29m long, but as the section’s were nearly 5m wide we had to bring the loads to site on special bogies and get escorted.”

Once on site each of the spans were assembled using a combination of welded and bolted connections, along the roofs, which consist of a series of RHS sections. Much of the cladding, glazing and ETFE was also installed prior to the complete spans being lifted into place during a 55 hour rail possession over the Christmas period. 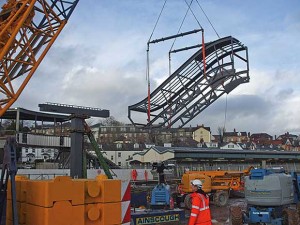 Prior to the lifting operation a central support steel ring beam, which sits on top of a concrete lift shaft was installed. This provides the spans with their central support, while at the north and south ends two 6m-high T-columns – made from 500mm x 500mm fabricated box sections –  had also been installed.

By erecting the footbridges first the project team were able to place the cranes on the vacant footprints of the terminal buildings. Once the spans were up and lifting equipment offsite, work commenced on the foundations for the two terminals.

The two terminal buildings are essentially portal frames, albeit in a circular shape. Each of the terminals has an attached accommodation block; a two-storey structure on the south side and a single-storey building on the north. The accommodation blocks are braced steel framed areas and are separated from the main terminal building by concrete shear walls, which provide the terminal’s stability.

The rounded terminal buildings are formed by a central steel ring which will be supported on temporary props during the erection process. A series of cranked fabricated box sections or tusks act as the structure’s ribs and are connected by CHS vertical members.

Steel erection is due for completion in March, with the project expected to be ready by September this year, when Newport will play host to the most prestigious event in golf, the Ryder Cup. The upgraded station will provide for the expected influx of visitors and hopefully become an icon of the city’s ongoing regeneration.

The old station buildings consisted of a single terminal at the end of elongated platforms and many passengers entering or exiting trains faced a long walk to and from the concourse. There was also very little provision for disabled access across the tracks. The new terminals and the connecting bridge have been positioned relative to the trains stopping positions, easing access and offering stronger connections to the city. As part of the overall scheme, the pedestrian routes surrounding the station are being upgraded, while the old station buildings have a preservation order and will be refurbished.