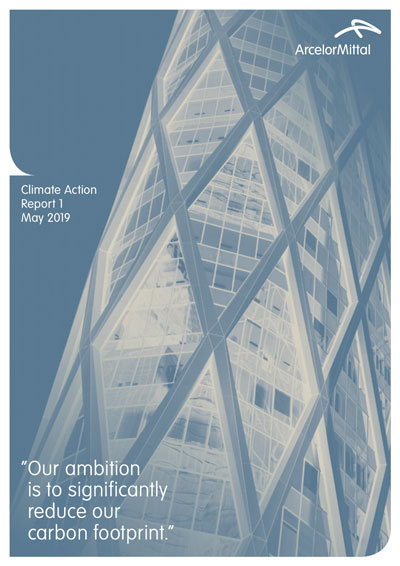 ArcelorMittal says it is at the forefront of an initiative to ensure the steelmaking sector achieves the Paris Agreement’s environmental aspirations.

In 2015 the Paris Agreement became a landmark environmental accord with aspirations to address climate change and its negative impacts. The deal aims to substantially reduce global greenhouse gas emissions to limit the global temperature increase in this century to 2°C above pre-industrial levels, while pursuing means to limit the increase to 1.5°C. The agreement includes commitments from all major emitting countries to cut their climate-altering pollution and to strengthen those commitments over time.

Following this, in May 2019, the UK Parliament became the first national government to declare an environmental and climate emergency, committing the UK to be carbon net zero by 2050.

Steelmaking accounts for 7 – 9 % of global CO2 emissions and with demand for steel forecast to continue growing for several decades to come, the carbon challenge is significant. In the UK, the built environment contributes around 40% of the UK’s total carbon footprint.

ArcelorMittal published its first Climate Action Report in May 2019 in which it outlined a strategic roadmap to significantly reduced CO2 emissions by 2050 and, in Europe, to achieve carbon neutrality by this date, in line with the objectives of the Paris Agreement.

This report, the first of its kind for a steel company, includes a suite of breakthrough technologies, and has enabled ArcelorMittal to make an intermediate target of 30% reduction by 2030. The company’s advancements in reducing the carbon burden of steelmaking include, in terms of circular carbon, converting waste wood into biocoal and reforming waste carbon gases. Both technologies will reduce the amount of coal and coke needed in the blast furnace and lower associated CO2 emissions.

Additionally, ArcelorMittal is building a demonstration plant to both capture carbon offgases and convert them into ethanol which can then be used as biofuel. It is also developing clean power technologies for iron ore reduction using hydrogen and electrolysis, both of which could deliver significant carbon reductions if powered with clean electricity. Significantly these technologies show that steelmaking can be zero carbon in the future.

ArcelorMittal says addressing the carbon burden in steelmaking is a long game with commercialisation not anticipated within 5 years for those most advanced technologies. However, the climate emergency is here and now, and the construction industry’s design supply chain has been quick to react declaring its own climate emergency with the formation of constructiondeclares.com.

In the UK, there are over 1000 signatories to constructiondeclares.com from civil and structural engineers, building services engineers, project managers and architects, all making a commitment to take positive action in response to climate breakdown and biodiversity collapse. A result of this is designers and material specifiers are seeking solutions and products with lower embodied carbon now.

Alongside constructiondeclares.com other organisations such as RIBA, LETI (London Energy Transformation Initiative) and HSBC have issued guidance to designers on how to reduce operational and embodied carbon in the built environment. Key to this advice is a range of carbon targets for various building types expressed in kgCO2e/m² which reduce in line with the Paris Agreement. 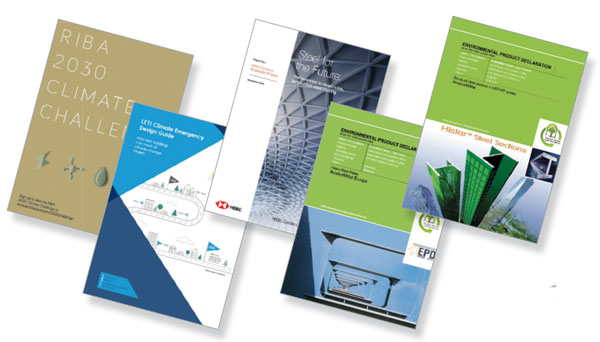 Plenty of guidance is available on how to reduce operational and embodied carbon in the built environment. For details of ArcelorMittal’s webinar on 9th July, e-mail: steligence@arcelormittal.com

For LETI there are additional targets which increase and develop circular thinking and circular systems. This approach gives targets for newbuild design in 2020 which includes 30% reused content and 50% end of life reusable content. While these targets are generally ambitious for the construction sector, steel construction is uniquely placed to answer both additional targets. HSBC lists general embodied carbon figures for a range of current steel manufacturing routes combined with additional carbon reducing techniques. ArcelorMittal says that clearly now with a range of published targets as guidance, designers will be working towards them as part of their immediate Climate Action commitment.

The company has a clear intent to offer open and transparent data on its products and processes to support the design community in their aim to address the Climate Emergency. In offering this support ArcelorMittal has been recognised in the 2019 CDP Climate Change Assessment with an A- Leadership Level rating for its corporate transparency and action on climate change. This puts it among the top 11% within the industry and compares very favourably with a global average Leadership Level rating of C.

EPD GWP figures can be put into context with the 2020 LETI embodied target of 600 kgCO2e/m² for offices with some basic estimations. Using Histar® rolled sections and estimated quantities from the recent BCSA costing update with BCIS Steelwork indices for building works material frame make-up gives the table below.

As well as stating Climate Emergency targets for designers LETI also promotes an increasing move towards circular design. The 2020 target suggest the inclusion of 30% reused content at build stage and 50% reusable content at end of life. Steel construction is highly circular with potential for matching reused and reusable aspirations through design for deconstruction and bolted connections. SCI P427 “Structural Steel Reuse” and P428 “Guidance on Demountable Composite Construction Systems for UK Practice” will help designers to consider future targets for reuse and reusability.

For details of ArcelorMittal’s webinar on 9th July, e-mail: steligence@arcelormittal.com 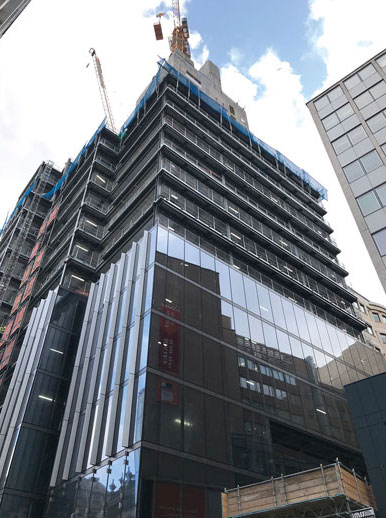 When complete, 103 Colmore Row, at 26 storeys will be Birmingham’s tallest office building.

ArcelorMittal
is a headline
sponsor of
Steel for Life