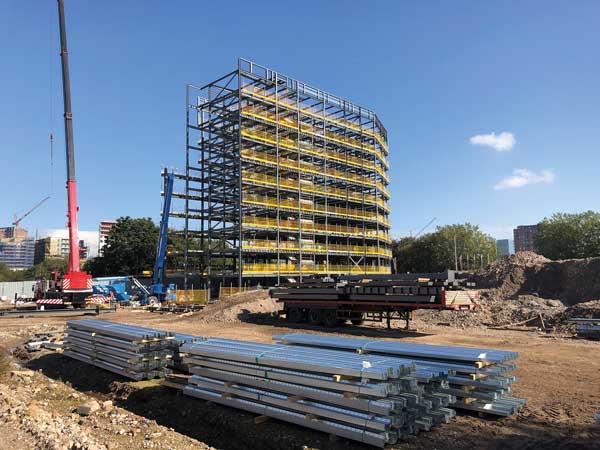 A high-rise residential scheme in Salford is making use of steelwork’s speed of construction to deliver its first apartment block.

Known as Regent Plaza, the scheme comprises five residential blocks, varying in height, with the tallest topping out at 26-storeys. Linked to four of the blocks, there will also be a two-level car park featuring a landscaped roof to be used as a resident’s piazza.

Construction work is being undertaken in phases, with the nine-storey Block B currently underway. Explaining the project’s sequence of construction, Sourced Development Group Projects Director Hamid Zakaria says: “Block A is the tallest of our buildings and we wanted a percentage of its apartments pre-sold before we started construction, in line with our business model, so our work began with the smaller Block B.” 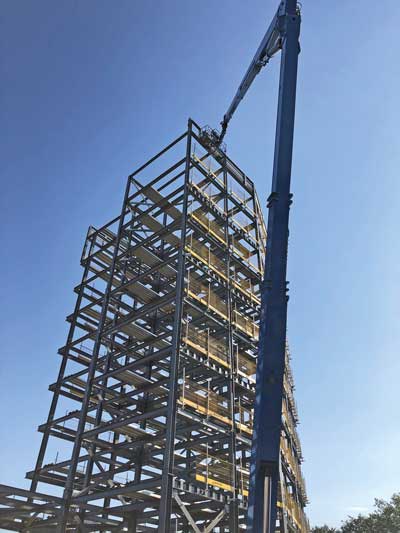 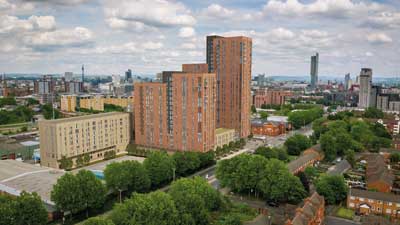 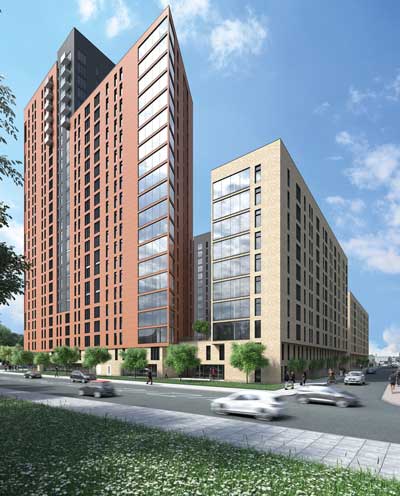 Block B is a steel-framed structure and this framing solution is likely to be used for all of the project’s other buildings.

“Steelwork is quick to erect and provides us with the desired speed of construction, while it is also the most relied upon method,” adds Mr Zakaria.

Under current proposals, the seven-storey Block C, the 16-storey Block D, the four-storey Block E and the car park are all steel-framed structures, while the 26-storey Block A is most likely going to be constructed with steel, according to Sourced Development Group.

The project’s plot is a brownfield site, which was previously occupied by a pub and a number of industrial warehouses. It was purchased by Sourced Development Group in 2019.

Once demolition was completed, the initial groundworks for Block B, which included the installation of drainage, reinforced ground beams and pile caps, were completed earlier this year.

Working on behalf of main contractor Helix Contracting, EvadX has subsequently fabricated, supplied and erected 360t of structural steelwork for Block B. Using a single 50t-capacity mobile crane, the steelwork was erected in a 12-week programme.

According to steelwork contractor EvadX, this one crane was sufficient for the erection as although the overall steel tonnage was 360t, there were no members longer than 12m and the heaviest piece was under 1.5t.

EvadX Project Manager Andrew Roberts says: “We also brought a 90t-capacity mobile crane to site in order install the precast stairs and place metal decking packs on each level for the installer.”

Steelwork is based around a column spacing of 6m to 7.5m for the block’s perimeter, a pattern which was designed to suit the fenestrations. Internally, two rows of columns, 2.1m apart, form the central corridor that runs the length of the building on every floor.

“The use of a composite deck solution gave us a slim floor construction, which was beneficial as the structure’s design has limited floor-to-floor heights in order to minimise the building’s overall height,” says SWF Consulting Director Phil Sarbutts.

Stability for the block is derived from cross bracing, which is concealed in partition walls and around the lift shaft and stairwells. Moment frames have also been used given the absence of a concrete core.

Vibration can be an issue with residential buildings and in order to negate any problems a typical floorplate was modelled using SCIA engineer and CADS footfall analysis to determine the vibration characteristics.

“The floorplate was checked for excitation nodes along the corridor and response nodes in the living areas,” says Mr Sarbutts.

“The response factors were found to be in the region of 4 or below, which is very good. A vibration dose analysis was also carried out on the worst-case excitation node to assess the floorplate throughout the night.”

In summary, Sourced Development Group says it is delighted to have made such fantastic progress on the project, particularly with this year’s difficulties with the supply chain and changing government guidelines to working safely.

The company adds, EvadX has erected the steel frame ahead of schedule and they are incredibly excited to complete this first phase of a new landmark development.

Block B is expected to be complete in mid-2021, by which time Sourced Development Group will have already started work on blocks C and D.

Blocks A and E, as well as the car park, will then commence in 2022, with the project’s overall completion set for full occupation in early 2024.

Callum Heavens of the SCI comments on the vibration analysis and floor solution used in the Regent Plaza development.

The dynamic performance of the structures in the Regent Plaza scheme was an important consideration for ensuring the comfort of future occupants of the apartments. Vibrations of floors resulting from the movement of people are typically not a cause for concern for the safety of the structure but can be a discomfort to occupants if those vibrations are not limited to established acceptability levels.

When designing to limit the magnitude of vibration of a floor, three quantities are important: mass, stiffness and damping. Damping is not practical to significantly alter or control precisely and so an engineer has to work with the mass and stiffness of the floor to achieve the desired criteria.

Composite slabs are effective in this regard as they bring high mass and stiffness whilst achieving a slim floor depth. It is also relatively straightforward to alter these properties, if necessary, by increasing the depth of the slab. Consideration of the grid arrangement of the beams supporting the slab can also be effective in reducing vibration by ensuring that the beam spacing is not too large nor the spans too long.

The traditional approach in the UK is to check the frequency of the beams independently for a minimum natural frequency of 4 Hz and it has been found that buildings designed in this way have generally performed well. However, this limit merely reduces the probability of adverse comments from occupants arising. It does not give any indication of the floor performance in service.

A more sophisticated technique is a ‘response factor’ analysis. This type of analysis is readily available in modern design software and can indicate the in-service performance of the floor, along with how the performance varies in different locations, allowing for a targeted approach to resolving vibration issues. The response factor itself is a measure of the magnitude of the vibration of the floor (in terms of acceleration) relative to a baseline value. Acceptable response factors vary depending on the usage of the floor (and the time of day in the case of residential structures).

SCI publication P354 discusses the response factor method (for use with software) and other vibration considerations in detail along with hand-calculation methods which can be applied in simple cases where a regular floor grid is used. An on-line tool found at http://bcsatools.steel-sci.org/FloorResponse provides improved predictions of performance over the simplified method without the complications of a detailed computer model.