A wing to suit programme constraints 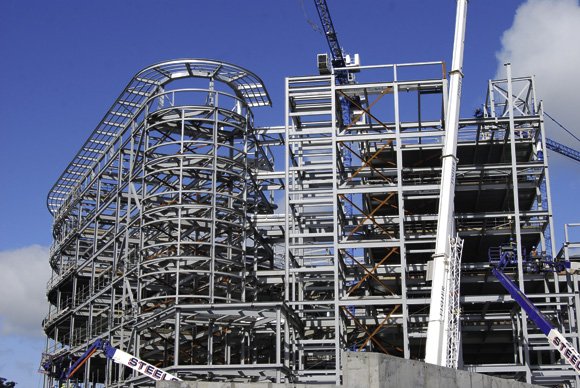 Kirkcaldy’s Victoria Hospital is in the midst of a redevelopment with the construction of a new wing.  A steel frame has proven to be the answer for a project which has a tight construction programme and an existing hospital next door, reports Martin Cooper.

The rationalisation of healthcare services in Fife is currently under way with the construction of a new wing at Kirkcaldy’s Victoria Hospital. Once complete the new building will significantly expand the Scottish town’s main hospital and allow specialist services to be relocated from the nearby Forth Park Hospital which will close down.

Main contractor for the project is Balfour Beatty, working on its ninth major hospital scheme under the Government’s PPP programme. As part of a 30 year concession, Consort, Balfour’s specialist PPP healthcare company, will provide the new wing which includes 11 operating theatres, an emergency care centre, 13 wards, surgical and medical assessment units, a maternity unit, and a women and children’s unit.

Offering a total floor area of 50,000m² over six levels, the wing will accommodate approximately 500 beds within a mixture of one-bed and four-bed rooms.

Unlike the existing 1960s Victoria Hospital buildings, which are dominated by a large austere rectangular tower block, architect BDP has designed a waveform structure which will also incorporate a landscaped area with public entrance and car park. This architecturally striking building is intended to present a bold statement as it will be the first part of the hospital many people will see upon arrival.

Although this new wing is an independent structure it will link into the older buildings at ground floor and basement levels. Where old and new buildings meet a new entrance area is being built adjacent to the existing access point for the hospital’s A&E.

The steel framed wing is essentially two linear blocks joined at either end and in the middle to create two large central voids or lightwells. The western block features a waveform or undulating outer elevation, while the eastern block is more rectangular in shape. 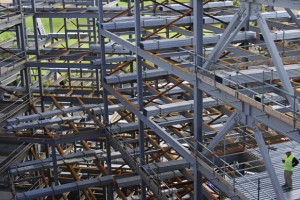 By September more than half of the steel frame was complete

Using a steel frame for the project was always on the cards for this project due to the tight construction programme. The client wants the job complete by 2012, and to this end Balfour Beatty will hand over the site to NHS Fife in November 2011 so it can then begin its own fit-out programme.

“Work on site began in late 2008 and consequently with such a tight timescale a steel frame was the best solution,” explains Giles Smith, WYG’s Project Engineer.

Roddy Mackay, Project Director for Balfour Beatty agrees and adds: “We have a successful track record for building hospitals in steel and a good working relationship with Severfield.”

Vibration can sometimes be an issue on hospital construction, but all functional areas of the composite floors were assessed with the methods set out in the Steel Construction Institute (SCI) design guide.

“The floor directly above the operating theatres houses a plant area and here the floor slab is thicker by 30mm,” explains Mr Mackay. “Likewise the roof area houses another plant area and again we’ve beefed up the composite floor.”

The construction site, for what is the largest ongoing project in Fife, is obviously right next to the southern elevation of the existing hospital. Some of this land was previously owned by the NHS and the rest was owned by the nearby linoleum factory and used for warehousing.

The proximity of a ‘live’ healthcare facility has posed one of the biggest challenges for the project team. There was initially a bit of concern about the potential levels of noise generated by the site. But Balfour Beatty liaises fortnightly with the client to discuss topics such as noise and there have been no complaints from angry neighbours. 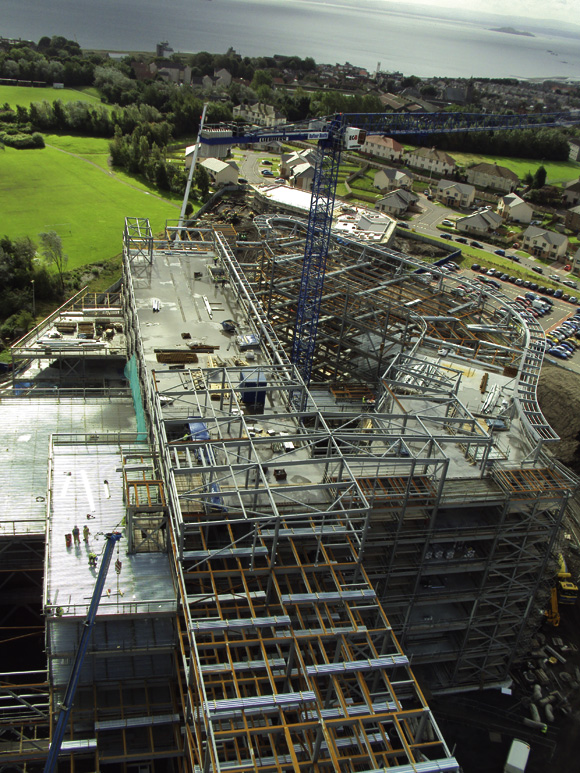 Some of the early works took place within feet of the existing buildings, and Mr Mackay says noise has not been a problem. “The steel erection is going well and it’s generally less noisy than other construction methods. There is obviously some noise, but we’ve found it easy to keep it to minimum.”

Steel erection began at the southern end of the new wing and has progressed in a northerly direction, with the final elements, adjacent to the existing building and forming the new entrance, due to be completed by the end of the year.

Working towards the existing hospital was the chosen method as it allowed Balfour Beatty to complete the modifications to the entrance area before the new steel frame was fully erected.

“Part of the existing entrance and one of the vehicle access ramps are on the footprint of the new wing,” says Mr Mackay. “We had to demolish the ramp and put in temporary bridges, which was all done while the steel frame was under way at the other end.”

Working in this direction was quite a convenient way to phase the project as the new wing is split in half by a movement joint which runs across the structure’s width. “We initially erected one bay north of the movement joint and then worked towards the southern end of the structure,” explains Steve Swift, Project Manager for Severfield-Reeve Structures.

Incidentally, while the steel fabrication is being done by Severfield-Reeve, the steel erection and supply and installation of metal decking is actually being undertaken by Fisher Engineering, a subsidiary of Severfield Rowen and sister company to Severfield-Reeve.

The structure is braced throughout for stability. However, during erection the frame has required temporary bracing to be inserted on all levels and then is only removed when the concrete decks have been cast two floors above.

Primarily the steelwork is erected around a 7.3m x 8.1m grid, but the shape of the building means this pattern has to vary on all levels. This is to accommodate the undulating wave-like eastern facade and the central lightwells which get wider from second floor level and above. By the upper levels each wing is approximately 18m wide.

An interesting element of the project is how something as mundane as a window cleaning gantry, which runs the length of the wave-like facade at roof level, has been turned into a feature. The gantry has been formed by 400mm box sections which have been faceted to accommodate the elevations shape.

“We needed something substantial as the cantilever puts torsion in the steelwork, and the box sections take the load back down to the connections,” sums up Mr Swift.