A slice of the action for steel 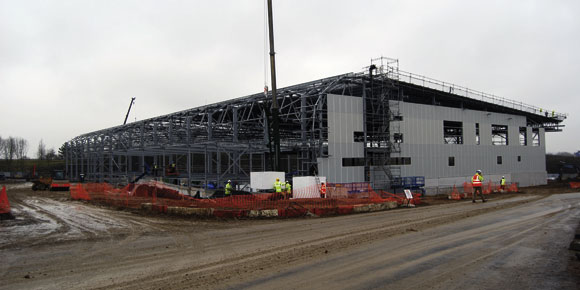 A steel framed solution was the answer for a new production and office building for Domino’s Pizza, where 60m long internal spans were a requirement.

The British public cannot get enough pizza, or so it seems. The disc-shaped Italian dish is probably the most popular take-away food in the UK. So popular in fact, that the Domino’s Pizza Group is planning to have 1,000 stores across the country by 2017.

To serve this grand expansion plan Domino’s is building a new purpose built office and production facility for the chain in the West Ashlands area of Milton Keynes.

Being built to the highest environmental standards, the facility will be approximately 13,099m² and will house a state-of-the-art commissary. This will service over 500 Domino’s stores, providing them with the fresh dough and ingredients to ensure each pizza has a consistent taste.

Domino’s Food Service Director, Gareth Franks, says the new commissary will make a real difference to the company’s operation. “Combined with our other two commissaries in Penrith and Naas in Ireland, this will give us the capacity to support our expansion plans.”

Due for completion in mid 2010, the steel- framed building measures 60m x 142m and also features an external two storey office block which is attached to one elevation.

The project is located on a greenfield site which did have a severe sloping topography of 1:25. “This may not seem like a troublesome slope but with a building of this size the site had to be levelled which meant a large cut and fill operation,” explains Justin Wearring, Engineer for Broughton Beatty. A series of 13m deep piles were then installed with a suspended floor cast on top before steelwork erection was begun. 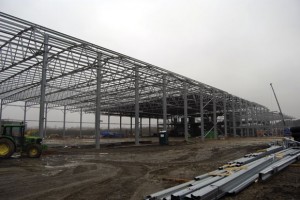 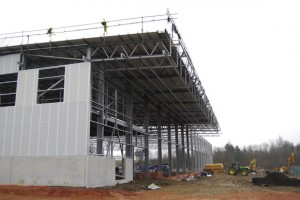 The main part of the building consists of a production area, and this part of the structure requires a large open column free zone. To achieve this the steel design incorporates a series of 17 x 60m long trusses based on a 8m grid. The trusses are tapered – from a depth of 1.8m to 4.7m – to form the sloping profile of the roof. The building has a 11m clear height to the underside of the trusses.

“The trusses are the main steel feature of the project as there is no other way of giving the building the required clear spans,” says Tony Walker, Barrett Steel Buildings’ Project Designer.

However, these steel sections’ maximum width meant they could not be transported in complete sections. Eighty percent of each truss was welded up at Barrett’s Bradford facility and then transported to site in four sections. “The 4.7m depth, at one end, is too wide for transporting by truck so the final section was delivered piecemeal and bolted together on site,” explains Mr Walker.

Once each truss was fully assembled the entire 10t truss was then lifted into place in a tandem lift involving two 35t capacity mobile cranes. Having the majority of the truss prefabricated also meant a considerable time saving for Barrett’s steel erection gangs.

Barrett’s Site Manager Michael Bryars, says the lifting operation was also a lot easier, not only because there was less assemblage of steel sections, but the prefabricated sections also meant there was less movement during the lift.

As well as supporting the structure’s roof and providing the clear open spans, they will also support refrigeration machinery, pipework and chillers. “By optimising the truss depth we have been able to keep the members small even though there is a high loading,” adds Mr Walker. From inside the building the trusses will be exposed and consequently they are an architectural feature.

Along one of the building’s two 142m long elevations there is a series of loading bays and the roof overhangs this entire side of the structure by 8m. This overhang was also prefabricated as a fifth section of the roof truss and was lifted into place in a separate operation.

On the opposite elevation, the building features an attached two-storey office block. This protrudes 12m from the main structure, is 56m long and unusually is entered at first floor level via a feature steel footbridge from the car park. The office block has precast stairs, precast planks and a precast lift shaft, all of which was installed by Barrett.

Another feature of the building is an internal 60m x 16m mezzanine floor which will be used for housing plant. This also provides the overall structure with some stability in this location, but generally stability is derived by bracing which has been secreted along all of the main elevations.

Barrett began steel erection during January and completed its programme in early March. Mr Bryars says the entire job went to plan, even allowing for a couple of days which were snowed off during February’s inclement period.

The company had two erection gangs on site during the programme. They initially erected half of the main structure, then one gang completed the office block while the other erected half of the roof overhang. Once this was complete, both gangs then worked as one to complete the main building along with the rest of the overhang.

The project also includes two smaller steel-framed structures which were erected as part of the programme. One is a two storey ancillary office block with plant room, and the other is the site’s gatehouse.

Milton Keynes Partnership (MKP), which is responsible for growth, development and investment in the city is obviously extremely upbeat about the project. Tim Roxburgh, Projects Director for MKP, says: “The Dominos project is great news for Milton Keynes, showing the confidence that major companies have in the city. Despite the difficult market conditions that are being experienced nationally, Milton Keynes remains one of the most attractive places for business in the South East.”