A lesson in steel efficiency 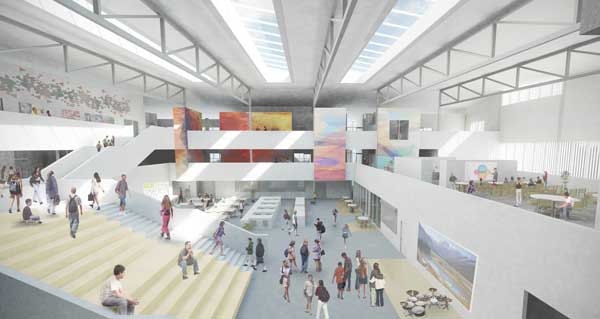 Dining facilities are housed in the atrium

Replacing the existing school, the new steel-framed structure will also provide a home for the council’s local office, a library, a base for police officers, and consequently the project is officially known as The Waid Community Campus incorporating Waid Academy.

The overall campus includes an existing primary school and a community sports centre, while the 800-place Waid Academy’s new sports facilities, including an all-weather rugby pitch, will be open to the public at certain times.

Typically, the ground floor of the building houses the community facilities with the school occupying the first and second floors, with one of the exceptions being the dining area which is in the centrally-located atrium.

Work on site started last year but, prior to the project team beginning, the initial design had been value engineered in order to bring the scheme within budget. Without this streamlining design work taking place the project may not have started at all. 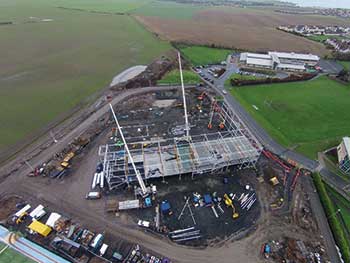 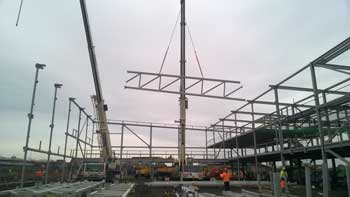 “As well as different cladding systems, the main alteration was to change the roof to a mono-pitched design from one that originally had a multi-pitched roof profile,” explains BAM’s Construction Director Martin Cooper.

The new economical pitched roof is said to reflect the project’s rural setting and is a nod to the many agricultural buildings in the surrounding countryside.

With its more economical steel-framed design settled upon, the job was able to kick off with BAM initially installing a new access road.

“An existing road alongside the construction site is used by people taking their children to the primary school and by users of the sports centre,” says Mr Cooper.

“It was our decision to construct a new road, and now we have our own dedicated route for deliveries, including the steelwork, which is much safer for all concerned.”

Once the road was completed, a series of piled foundations and a concrete ring beam were installed in advance of the steel erection programme commencing.

Steelwork contractor BHC is fabricating, supplying and erecting 520t of steel for the project. This equates to approximately 1,400 individual pieces, requiring 2,850 connections and a grand total of 16,822 bolts.

The speed of the erection process and the knock-on effects this has for the whole construction programme was the main reason for choosing steel as the framing solution, according to BDP’s Project Architect Stuart Duncan.

The building is roughly square-shaped on plan with each elevation measuring approximately 65m-long. For the erection programme, the building was divided into three zones, with each one completed to its full height before BHC moved onto the next zone.

BHC’s second mobile crane would then follow on behind the steel erection gang and install the flooring systems for each completed zone.

“The precast concrete planks are supported on a grillage of steel ultra shallow floor beams, providing a reduced structural zone and promoting an efficient overall floor zone with exposed soffits within the classrooms.”

Between the teaching wings the use of insitu concrete on metal decking provides a bridge between the two stiff precast floor plates. The use of conventional downstand universal beams provided additional efficiency and this was possible due to the introduction of suspended ceilings in these areas with a reduced floor-to-ceiling height.

The steel frame’s columns are spaced at 7.5m intervals to form the teaching area. These were brought to site in 12m lengths corresponding to the overall height of the structure and providing effective robustness for the category 2B structure.

Next to the centrally positioned atrium is a double-height drama hall and this space was particularly challenging to design and build. The proposed installation of retractable tiered seating and the intended occupation of the space required a detailed assessment of the dynamic response of the floor plate, due to the potential effects of rhythmic synchronized movement.

Occupying two thirds of the structures central zone is the full height atrium. This part of the building is formed by five 30m-long ×1.8m-deep steelwork trusses, which had to be spliced at mid-span to facilitate transport to site in two pieces for subsequent assembly on site prior to being lifted into position.

A series of internal exposed CHS columns surround the atrium space with large 406mm diameter columns positioned within the adjoining elevation. These were required to provide adequate stiffness to the lateral supports of the glazed façade. As the columns were unrestrained over their full length the increased section size was essential, providing both function and form.

Overall the steel frame is stabilised by the two precast floors in the two teaching wings, which provide stiff plate diaphragm action, transferring lateral and notional forces to vertical steel bracing located within the perimeter and internal partition walls.

Due to curtain wall, window and service penetration positioning, locating the bracing was challenging. A number of bracing techniques were utilised. Typically SHS/RHS bracing was adopted within the secondary steel zone in order to conceal it behind finishes.

Because Anstruther is a coastal town the steelwork was primed with an enhanced protective paint specification to protect the structure against atmospheric corrosion while it was exposed during the erection and ongoing construction process.

Waid Academy is scheduled to be open in time for the 2017 autumn term.