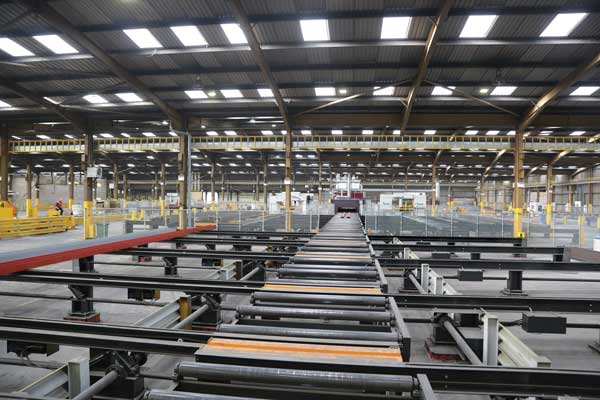 AJN Steelstock has made a multi-million pound investment at its new 17-acre depot in Somerset, which includes £5M of steel processing machinery supplied by FICEP.

The new site’s production total is said to be growing rapidly month by month, with the goal to achieve 500t per day within five years by increasing shift patterns from one to three in order to fully exploit the potential of the FICEP steel processing machinery.

The eight new FICEP machines in operation at AJN include an Endeavour – a multi-spindle drilling line, the Gemini – the gantry drilling, milling and thermal cutting system for plates, several Katana – high speed bandsaws, a Rapid – high speed drilling line for angles and flats, and a shot blasting machine.

The order with FICEP also included another Endeavour machine that was purchased for AJN’s Kentford facility.
AJN has conducted a detailed time study analysis that determined a 48-minute job on its old machinery now takes under five minutes on the Endeavour and is four times faster when drilling only, while productivity is said to have been further enhanced by the Gemini.

AJN Finance Director Courtney Bell said: “When we decided to expand into a new site, FICEP were the ones who offered us the best solutions after a considerable review of existing and new suppliers.

“The Endeavour proved to be the right solution for drilling and sawing. On top of this, the Rapid 25 we purchased allowed us to secure a large amount of new business.”